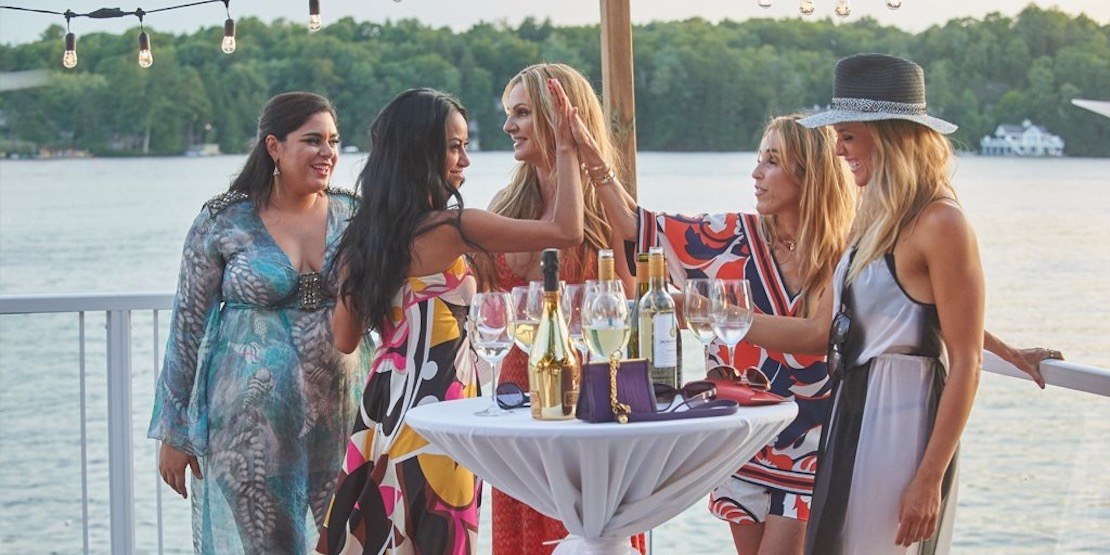 What’s a summer in Toronto without a weekend escape from the big smoke?

This week on The Real Housewives Of Toronto, the ladies are cottage bound for Joan’s big dock party in Muskoka, or as completely inaccurately described by Roxy, “Hamptons of Toronto!”

Once the RHOT ladies were finished packing way too many hats, and Ann packing a fishing vest and waders altered to be skin tight (you row row row that boat, Ann!), the ladies hit the road. We all know Kara’s road trip mix contained two and a half hours of only one song: “Jesus Take The Wheel” but you’ll also be glad to know that continuing this week, she and Roxy are still in a fight, as Roxy explained to us through hashtags #thanksroxy #gofigure #karavsroxy #whocares

However, in an unprecedented move, the other RHOT ladies seem hell bent on being reasonable and choose to get to know Kara for themselves. Joan visits Kara at her cottage for coffee and even Jana throws her a bone. And by bone I mean ‘boner smoothie’. Apparently that’s what’s served at Kara’s family home for refreshment and female libido power. For anyone wondering about the recipe, it was Matcha and rhubarb: the sexiest of all perennial vegetables!

While we were worried the episode was getting too hot to handle (thanks to the boner smoothie and image of Ann’s thong peeking through those rubber waist waders), the chill in the air when Roxy and Kara finally faced off cooled us down. However, before the two women could finish passive aggressively avoiding the subject, Kara and Roxy had to put their boxing gloves aside for the sake of Ann who has a fainting spell on Joan’s dock.

This was definitely the best part.

The RHOT ladies, WHO ARE MOSTLY ALL MOTHERS OF CHILDREN have no idea what to do to help Ann and it is… Hilarious. Joan frantically suggests: “should we lay her flat?” as if Ann were a wheel barrow whose wheel needed replacing. Meanwhile, Kara suggests putting something cold on her brain stem. Whaaaat? OH GOD! The bottle of wine in the chiller isn’t cold enough yet to cool Ann’s brain stem and she MIGHT DIE!

Thankfully, Ann survived because we wouldn’t want her to miss all drama in the great white north. This is same-location-over-multiple-episodes drama, people! Finally, we cap off the episode with Kara once again causing controversy by inviting everyone to her cottage for a dinner party. The theme (because there always has to be one) is Rovello! No one seems to know what that means but Roxy does, as she seethes under her breath while explaining to Grego, “It means rustic Italian!” However, the real sting is that the night Kara has chosen to have the Rovello party is Roxy’s birthday. Wait, Kara is having a dinner party on the same night as Roxy’s birthday and is not making it all about ROXY?! How rude!

This seems to be one of many outrages and as Joan, Grego, and Jana drop trou to skinny dip at the end of the first night, we know we are seeing just a prelude of more nudity and drunken pinot grigio-fulled rage to come.

Someone lay me flat and put something cold on my brain stem! I can’t handle it!