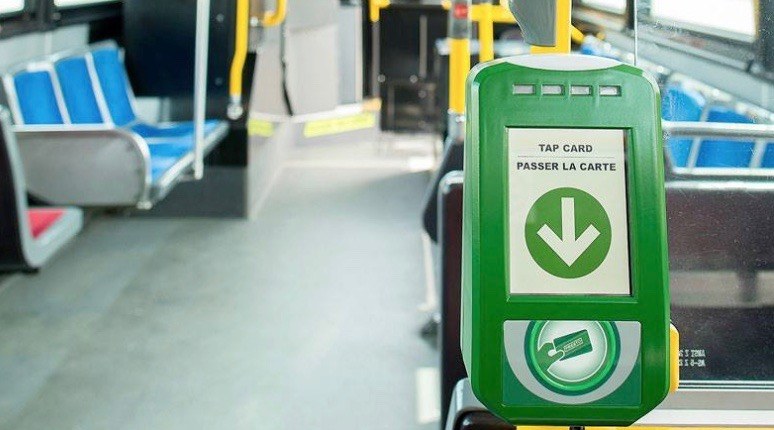 In 2006, the Ontario Ministry of Transportation signed a 10-year, $250-million contract to design, develop, and operate a single fare system across the Greater Toronto and Hamilton Area.

They called it PRESTO, its goal being to allow riders to easily pay for their commute throughout the GTHA using a contactless smart card without jumping between 10 frustratingly unique fare structures.

Such projects have been successfully implemented in much larger transit hubs around the world – Seoul introduced the world’s first contactless transit smart card in 1996, followed by Hong Kong in 1997 and London in 2003 – though Toronto’s transit authorities were never ones to pass up a letdown.

From the get-go, the toxic intersection of overlapping agencies that has hindered progress to the region’s transit infrastructure for decades spurred complications yet again. When the contract was signed, the Toronto Transit Commission did not agree to have PRESTO implemented on its system. The project would go ahead with over 80 per cent of the region’s ridership excluded.

It wasn’t until November 23, 2011, five years into the contract, that the TTC authorized the execution of all necessary agreements to roll out PRESTO on its fleet of vehicles. Enthusiasm for the system was mute, and time to properly execute it tight.

As can be expected from a half-assed commitment, Metrolinx and the TTC have rolled out PRESTO with the efficiency of subway air conditioning.

In September of this year, two months before the project was supposed to be completed, only 39 of Toronto’s 69 subway stations were equipped to accept PRESTO cards, and just half of TTC buses. Earlier this month, it was revealed that the cost of outfitting the TTC’s fleet with late-1990s technology would run $22 million over budget. On top of that, Bombardier was massively behind in its shipment of new streetcars, forcing the TTC to install PRESTO readers on substitute buses that would otherwise have been out of commission within the completed project’s framework. Twelve per cent of them didn’t work anyway.

Choosing which agency of incompetence to be most frustrated by is like trying to name your favourite way to get to the airport from downtown – every choice invites bewilderment.

One could be astonished by Metrolinx’s dreadful initial assessment of the project, which would see 281 change orders in under a decade totalling $45 million related to fixes or enhancements to the PRESTO system. Or dismayed by the TTC’s inability to have the highly unpopular system function properly once it finally started to roll out. And let’s not forget about Bombardier, always a top-level candidate for disappointment.

Together, they’ve compiled a colossal portfolio of ineptitude befitting of the region’s transit history. The infographic below illustrates how PRESTO’s arrival has been anything but what its name would imply. 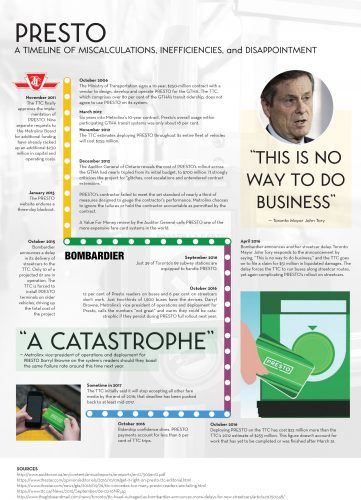