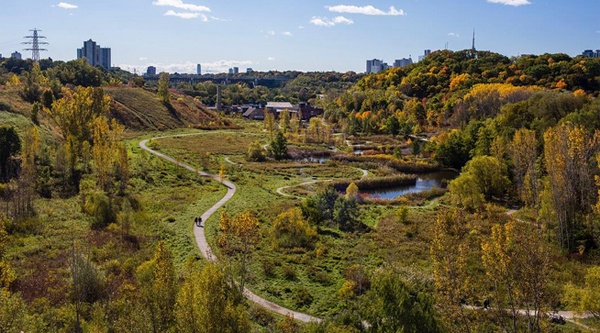 The City of Toronto and Evergreen Canada just announced a new 200-hectare ‘super park’ that will see seven kilometres of forested trails connecting the lower Don River from the Evergreen Brick Works south towards Corktown Common and the mouth of the Don River at Lake Ontario.

The announcement made today by Mayor John Tory, Geoff Cape (CEO of Evergreen Canada), and Janie Romoff (General Manager of Toronto Parks, Forestry and Recreation) introduces an innovative funding partnership that will see key improvements made possible by foundational donations.

“Toronto was built around its ravines. They give the city a unique identity that has defined how our city has grown. This project allows us to celebrate our ravines, talk about the important role they play for our residents, our resilience and our quality of life,” said Mayor Tory at today’s press conference. “With the help of private donors, we will continue to make improvements to the Lower Don Valley, like new way-finding signage and entry points that will help residents access and navigate this park.”

The project, first launched in 2015, brings together landscape architects, designers, urban planners, City and Toronto Region Conversation Authority staff, artists and university students to reimagine the city’s ravine system as a neighbourhood with parklands serving as the backyard to more than 250,000 Toronto residents.

The intent is to enhance the green corridor by implementing a series of improvements including a new Pottery Road Bridge and Belleville Underpass, new parks, multi-use trails and wayfinding signage while also protecting existing habitats and restoring healthy natural functions in the Lower Don watershed.

“Together we are creating a true legacy project,” said Andy Chisholm, Don River Valley Park Campaign Chair, “Our shared vision will help restore and revitalize the ravines, creating distinctive spaces with improved ecology and access, while introducing cultural initiatives like the new public art program to be launched in 2017.”