Ontario is deploying mobile testing teams to COVID-19 hotspots across the province, as part of its expanded testing strategy.

On Friday, Premier Doug Ford said that mobile teams will provide swab testing and can be  “rapidly deployed” to a specific neighbourhood, region, institution or workplace to enhance existing outbreak management.

This new strategy is to ensure a “rapid and agile” response in testing capacity for outbreaks.

The strategy is included in the province’s new post-peak testing plan, Protecting Ontarians Through Enhanced Testing, to enhance surveillance and testing across the province, in coordination with Ontario Health and Public Health Ontario.

Starting June 1, there will be community-based testing in “High COVID Active Communities” as well as school boards communications to build awareness on testing.

Then, on June 2, there will be planning and initiating of testing at all retirement homes.

And, there will be detecting and containing of cases by expanding asymptomatic surveillance for vulnerable populations, including long-term care homes, congregate settings, and workplaces where physical distancing is difficult.

“Ontario now has the most open and robust testing criteria in the entire country. In fact, anyone who feels they need a test will be able to get a test,” Ford said.

“We can’t manage what we can’t measure, and our newly expanded testing strategy is our best defence against stopping the spread of COVID-19 as we gradually and safely reopen the province. More proactive testing will give employers and their employees confidence as they return to work and will fortify our alert system for any potential surge in new cases.”

According to the province, since May 25, there has been symptomatic and asymptomatic testing at assessment centres.

And, monitoring and testing of all staff at longterm care homes has been ongoing.

Since Monday, LCBO staff have been directed to local assessment centres, as well as Toronto first responders and families — this includes police, fire, EMS and paramedics.

In addition, hospital workers at select hospitals and select adult correctional facilities have been monitored and tested. 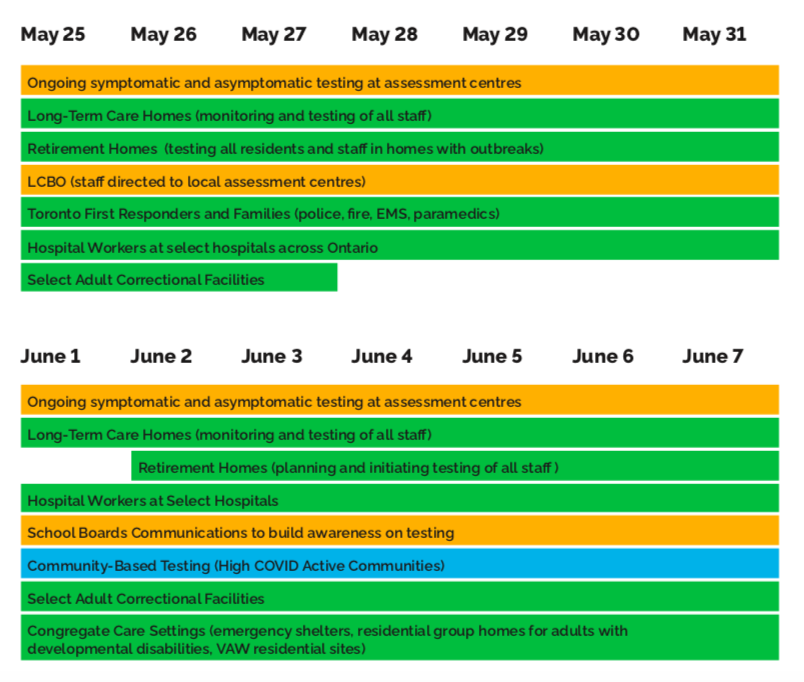 The other populations that will be considered and incorporated into the testing plan include essential workplaces like agri-food businesses, supply chains transport services, manufacturing, construction, social services and media industries.

And, the general population will also be looked at in agriculture, education, municipal affairs, labour, and public works and infrastructure. 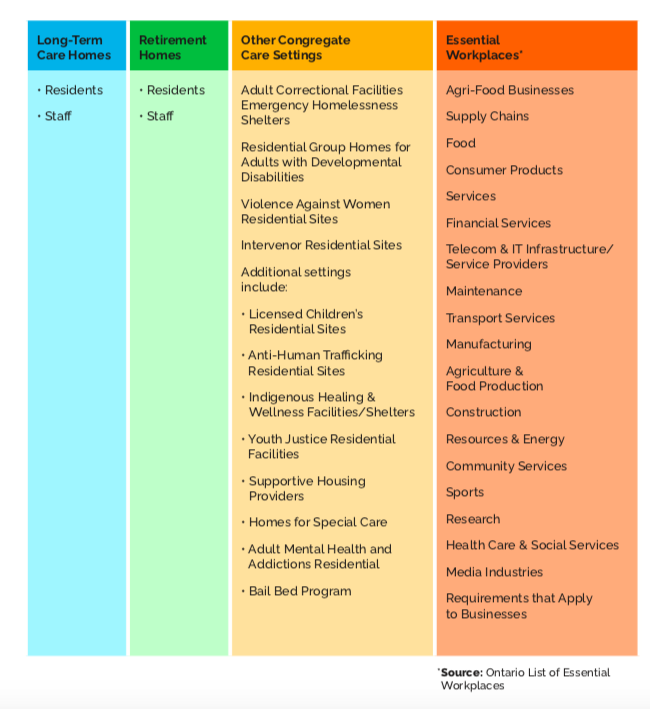 Since the start of the pandemic Ontario has increased daily testing capacity from 4,000 a day to 20,000 a day — on Friday, 18,525 tests were done indicating some of the highest numbers of tests so far..

Before the pandemic there were also no assessment centres and now there are 131 across the province which are connected to 20 labs.

“This is the backbone of the testing infrastructure,” Matthew Anderson, President and CEO of Ontario Health said.

He also emphasized that before the pandemic, public health labs were not connected to hospitals and commercial labs, making it difficult to coordinate large testing.

Ontario will also soon release a renewed strategy to support public health units with case management and contact tracing, including launching a new exposure notification app that will alert Ontarians when they may have been exposed to COVID-19 and would recommend appropriate actions, such as monitoring for symptoms, self-isolation and/or appropriate next steps on getting tested.