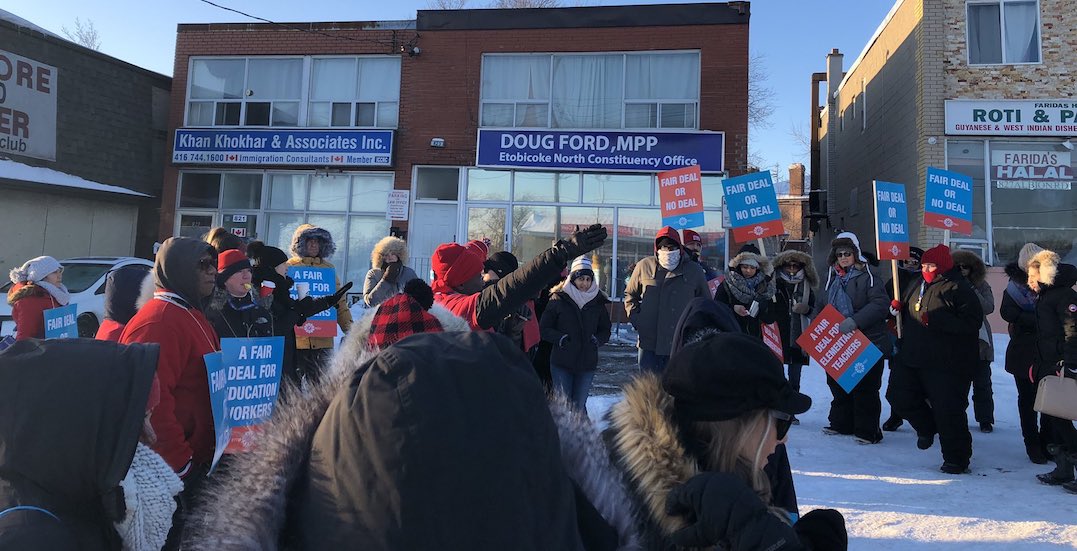 The battle over classroom sizes in the province rages on as elementary school teachers across Ontario begin the week with strike action on January 20.

Members of the Elementary Teachers’ Federation of Ontario (ETFO) in Toronto, York Region, and Ottawa-Carleton school boards are taking part in another one-day “full withdrawal of services” today.

“For 29 days, Minister Lecce has refused to return to contract talks with ETFO even though we tabled revised proposals in our last session on December 19, 2019,” said ETFO President Sam Hammond in a release.

“We can only assume that the Ford government does not want to discuss key issues for students, student learning and educators in public elementary education. They only want to talk about cuts to public education.”

Strike action will continue throughout the week with Members in Grand Erie, Trillium Lakelands, Renfrew and Superior-Greenstone taking action on Tuesday January 21, and those in Thames Valley, Rainbow and Rainy River doing the same on Wednesday January 22. Members in Avon Maitland, Halton, Niagara and Lakehead will strike on Thursday January 23.

The move is mainly due to the union’s objection over increases in class sizes by the Province.

The ETFO says there is still no mandate to discuss that issue, alongside the topics of more resources for students with special needs; protection of Ontario’s “world-renowned” Kindergarten program; reduction of violent incidents; and fair compensation for educators, particularly occasional teachers, early childhood educators, professional support personnel and education support personnel.

“We continue to urge the Minister to get back to the table to discuss the critical issues that parents and educators care about,” said Hammond.

Meanwhile, Education Minister Stephen Lecce announced on Wednesday that the government of Ontario will offer parents a payout of $25 to $60 if strike action closes schools or school-based child care centres.

He has previously stated that the continued strike action is unfair to students, and said the provincial government has been trying to reason with the teachers’ union.