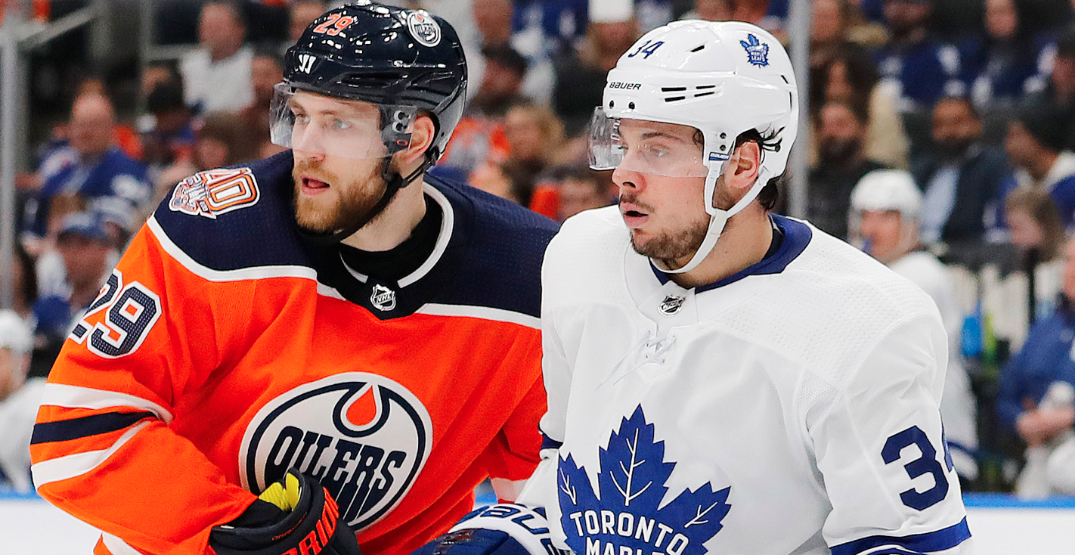 Leon Draisaitl knows he has Auston Matthews in his sights.

And, as it stands, he doesn’t even have to look over his shoulder to see him.

Draisaitl and Matthews neck-and-neck in the race for the Maurice “Rocket” Richard, given at season’s end to the NHL’s sharpest shooter. The pair is in a deadlock with 49 goals apiece; Matthews has played 61 games and Draisaitl has suited up for all 68 Oilers skates.

Draisaitl knows exactly where he stands.

Where Matthews is, too.

“I’d be lying if I didn’t,” Draisaitl said after notching his 49th in a 4-3 shootout win against the Los Angeles Kings on Wednesday. “It’s impressive what he’s doing. It’s the same thing. Teams focus on him and he scores 50 every year…I mean, pretty much every year.

Matthews is the reigning winner, netting the award with 41 goals in 52 games last season.

He’ll reach 50 for the first time in his NHL career and is on pace to reach 62.

Draisaitl, by comparison, is trending towards a 59-goal finish.

Chris Kreider of the New York Rangers currently sits three back of the duo at 46 goals.

“He’s a great player,” Matthews said of Draisaitl Thursday morning. “I’m not too surprised. He makes stuff happen every night. He’s a big body, he finds the back of the net pretty occasionally. So I’m not surprised.

Matthews, naturally, is the betting favourite.

The Maple Leafs sniper is a -140 favourite to take home the award. Draisaitl is second at +160, according to Bet365.

Not the longest of odds to snap up an upset.

But some work to be done.

“Of course, I’d like to beat him, yeah,” said Draisaitl, whose NHL career-high is 50. “But he’s a pretty good player himself.