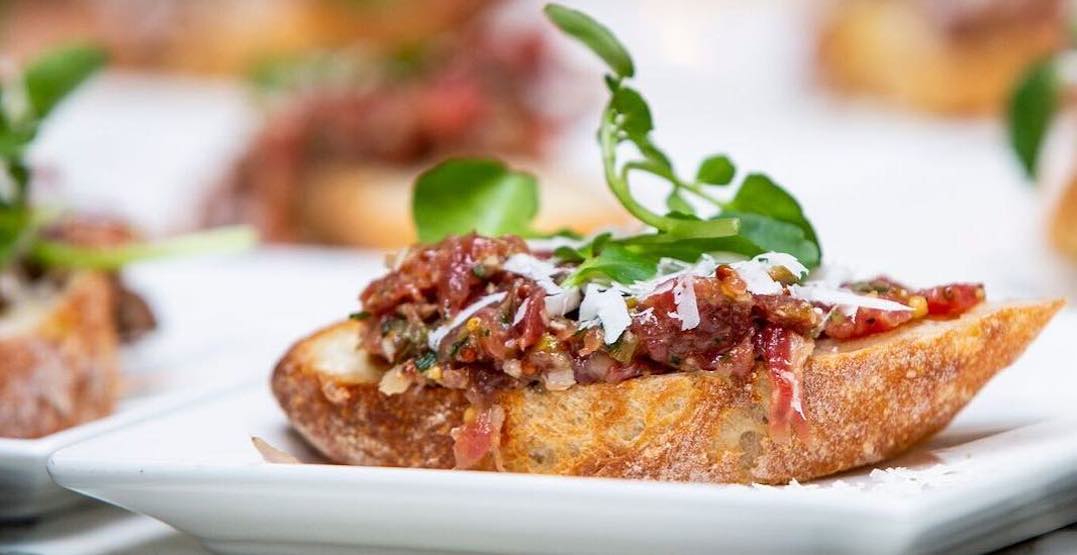 Offering a dinner and drink experience that looks ultra-luxe, LOUIX LOUIX awaits you at The St. Regis Toronto.
Marbl is open now, offering delicious eats in the 455 King West spot that used to be Susur Lee and Drake collab, Fring’s.
Mademoiselle is also in that space, occupying the main floor and serving champagne as you wind-down from the workday.
Those in need of a sweet-fix can now visit Carole’s Cheesecake STIX, in the Saks Food Hall by Pusateri’s.
Now open at 849 Dundas West, Casa la Palma is offering the only rooftop patio on the strip from Parkdale to Chinatown. Now if only the weather would allow us onto that rooftop…
Pablo Cheesetart just opened a new location at Fairview Mall, so you can up your energy while you finish up your holiday shopping.
Uptown girls (and guys, and everyone) can now enjoy Byblos close to home; the spot’s new location is open at 2537 Yonge Street.
Cumin Kitchen is offering authentic Indian food made with lots of spices and lots of love at this new spot at 1820 Danforth Avenue.
The V-Eats pop-up has begun at 1263 Queen Street West, and it’s here to stay until February 28.
Garrison Creek has joined the Little Italy roster. The new spot is offering up mouthwatering fare at 760A College Street.
Fuwa Fuwa has moved on up… to Yonge and Eg. Find the fluffy pancakes in their second home at 2471 Yonge Street.
Healthy, on-the-go eats are available now at FLEETS, located at 369 Church Street.

Pizza Forno will be offering 24/7 pies from a pizza vending machine at 1235 Bay Street starting Friday.
Gourmands don’t have to wait much longer… McEwan’s Gourmet Grocery is set to open at 1 Bloor Street East in January.
We don’t yet know when they’re coming or where they’re going to settle down, but take comfort in knowing that ASTA Dough will be bringing edible cookie dough to Toronto in the near future.
There’s a new Burger’s Priest location coming to 507 Danforth Avenue, and the doors should open any day now. Their projected opening date is mid-December. So… now.
According to this posting on Indeed, Basil Box will soon be welcoming a new location at Bathurst and College.