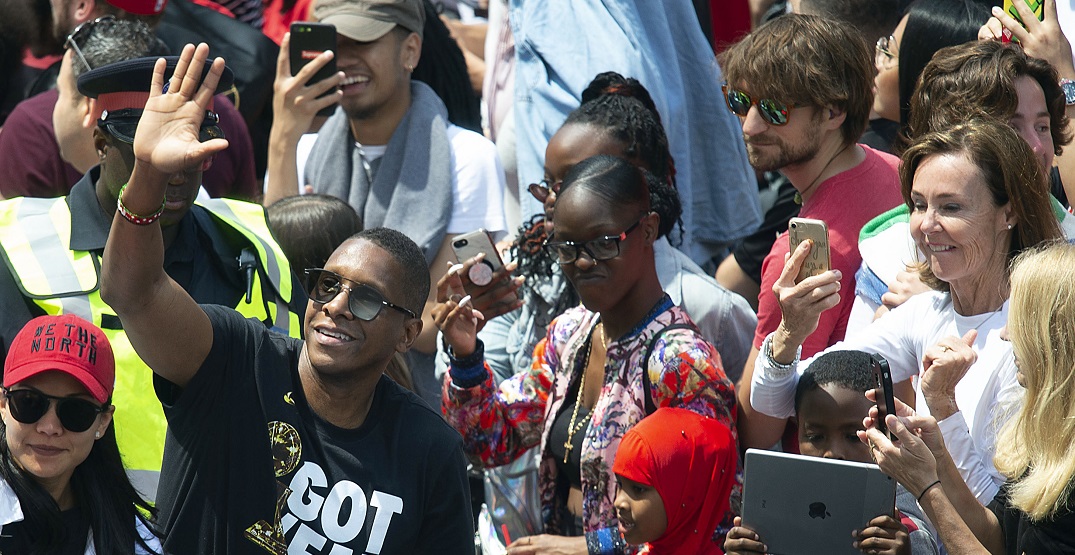 Toronto Raptors president Masai Ujiri has been an iconic figure in the Canadian sports landscape for nearly a decade.

But a tumultuous few years put his status as the head of the Raptors in doubt, including a report that Rogers executive Ed Rogers was looking to oust him in the offseason for being “arrogant” and “overpaid.”

Ujiri was the subject of rumours alluding to his departure from the Raptors’ organization for other teams, with a resume of success that likely could’ve landed him in just about any front office in the league.

Eventually, Ujiri chose to stay in Toronto, inking a long-term contract extension with the team this summer.

When asked what made him stick with the Raptors, Ujiri said the people of Toronto helped influence his decision.

“You see the people; you see how great they are. They’re so loving, they’re so caring, diverse,” Ujiri said in an interview with Daily Hive. “Even though it was hard times, it was important. The relationships you’ve developed not only with people, with the fans, everything with how you interact; it’s important to me and my family.”

“It’s so important for us to have everybody together,” Ujiri said of the purpose of the event. “Celebrating Nelson Mandela, first of all, what he was about, and he was about, he was about kindness, he was about selflessness. [This event] is about me bringing people together and giving a sense of hope that things are coming back and celebrating this man. The NBA is back; sports are back. I really feel good about it.”

Ujiri said that the lessons of the COVID-19 pandemic reinforced the importance of kindness for him.

“Sometimes, we’re going to go through those rough patches in life. We all have to stay together,” Ujiri said. “We all have to help each other. As a neighbour, as a brother, and as a teammate, we all have to stick together and sometimes find a way during this time, by this way, and we show kindness, we show hope, and bring people along.”

Ujiri added that he uses Mandela’s leadership as an inspiration in his day-to-day life when dealing with adversity.

“He went through that for 27 years,” Ujiri said, a reference to Mandela’s time spent in South African prison. “We all have to come up and be strong. We all have to have that mentality that things are going to get better.”

Ujiri and Giants of Africa are in the process of building 100 courts across the African continent. For the guests of Ujiri’s in attendance at the gala, the future impact of the courts.

“Think about the amount of lives that are gonna change where they have an outlet to learn, to express their creativity,” Juno Award-winning artist Tobi said. “I think in the future that will be very beneficial to themselves and their neighbourhood.  Those courts are going to be empowering.”

Tobi, who was born in Nigeria, where Ujiri grew up, said it was important for him to support Ujiri’s effort to show love to “the diaspora worldwide.”

“He’s just a really phenomenally active human being and is a friend to everybody,” singer-songwriter Chantal Kreviazuk added of her connection to Ujiri.

Canadian Minister for Women and Gender Equality and Youth Marci Ien shared a story of how she and Ujiri created a program for the students at Dene High School in La Loche, Saskatchewan, where there was a school shooting back in 2016. Ien and Ujiri have since organized annual trips for the students to attend Raptors games and learn more about post-secondary life in Toronto.

“He’s been my partner. We’ve been partners, and that’s why I have seen how he leads by example,” Ien said of the program. “I have seen that this was just outside of the realm of his job with the Raptors; it’s just Masai as a human being, wanting to help those who were in a very pretty bad predicament.”

Ien added that she “loves” the breadth of Ujiri’s off-court impact.

“Not everybody does that, but it speaks to his character and speaks to the man and philanthropist that he is,” Ien added.