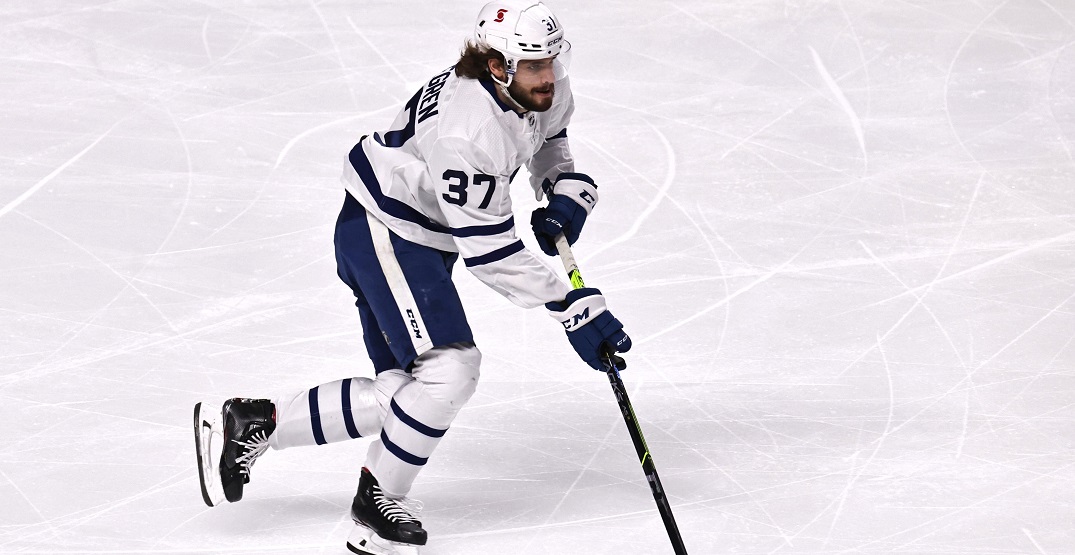 It’s looking more and more likely that defenceman Timothy Liljegren could get his most serious chance with the Toronto Maple Leafs this season, as he seems poised to crack the lineup out of training camp.

Most are pencilling the 22-year-old into the seventh defenceman spot, shoring up the right side of the defence behind presumably TJ Brodie, Justin Holl, and Travis Dermott.

Dermott is currently day-to-day with a calf injury a week out from the regular season, which could provide Liljegren with a chance to be in the opening day lineup next Wednesday.

It seems like a given that Liljegren will get some action with the Leafs this year, though it’s hard to picture his opportunities being plentiful, barring an injury.

“Both guys have taken significant steps from where they were a year ago,” head coach Sheldon Keefe said earlier in training camp about Liljegren and Sandin.

But it’s still an uphill battle. Liljegren still has time to prove that he belongs in the NHL, as he should have all of this season as an extended tryout opportunity.

If he can’t find regular ice time at the NHL level this year, the last year of his entry-level deal while he’s still waivers-exempt, a trade might be the most sensible option for the Leafs to recover some value from Liljegren.

In season five of his development curve, 2021-22 seems like it could be the last chance for Liljgren to prove to the Leafs’ organization that he’s a necessary part of their future.

It’s been an up and down ride since Liljegren was drafted by the Leafs 17th overall back in 2017. Once touted to be a top-5 pick in the draft, a bout with mononucleosis while playing for Swedish club Rögle BK saw Liljegren’s draft stock fall quite rapidly.

Leafs fans thought they might have nabbed a mid-first round gem, the kind of player everyone would’ve wondered a few years down the line how so many teams passed on.

As right-handed defencemen have traditionally come at a premium, Liljegren looked like he might have been a dependable top-four option for the Leafs for many years.

It’s safe to say it hasn’t panned out that way, at least, not yet.

He’s played just 13 games for the big club since being picked, picking up just one assist in the process. He’s only averaged 11 minutes of ice time a night at the NHL level.

The good news is he’s looked pretty solid in the 148 games he’s skated in for the Marlies spread out over four seasons, often playing top pair minutes. He’s put up 73 points in the regular season, adding nine points in 33 playoff contests, including a 2018 Calder Cup championship.

But time is ticking for being Liljegren to be more than a “decent AHL guy.” The league’s two top vote-getters for the Norris Trophy last season — Adam Fox and Cale Makar — were both 22 last year.

There is something to be said about Liljegren simply not getting enough looks.

50 players from that 2017 draft have managed more NHL experience than Liljegren, while 17 defencemen on the Leafs roster have played more than his 13 games over the last four years.

But there’s also the fact that he’s repeatedly found himself on the outskirts of the Leafs’ depth charts for the last several seasons.  For Liljegren, the time really is now or never.

What does he have to do to make the lineup?

There’s not too much special in the Leafs’ defensive prospect pool that’s challenging behind Liljegren — at least not yet. 2020 third-round pick Topi Niemelä did win the top defenceman award at the 2021 World Juniors, but he’s yet to even sign an entry-level with the Leafs.

Liljegren will be seventh on a depth chart that has six spots. He should be the next man up just about all season long, even if he is sent down to the AHL at some point.

To put it simply, all Liljegren has to do to become a Leafs regular is prove that he’s better than one guy. Of course, that’s easier said than done.

Right now, there are no real openings amongst the Leafs’ d-corps, nor reason to believe that there will be at the conclusion of the season.

Five of the Leafs’ six regular defencemen have contracts that will bring them back next year: Brodie, Holl, Dermott, as well as Jake Muzzin and Rasmus Sandin. Morgan Rielly remains unsigned, but if he is on the outs, it’s only sensible the Leafs would attempt to replace him with another veteran player.

Brodie is locked into a top-pair role for the foreseeable future. Neither Dermott nor Holl are the flashiest players — Dermott put up six points last season, while Holl put up 20. Each scored just twice.

The simplest way for Liljegren to prove he deserves a roster spot?

Keep scoring, or at least picking up a number of assists whenever he’s in the lineup. Dermott’s got a wealth of experience with the Leafs, but has never really shown too much of an offensive upside.

Asking the current iteration of Liljegren to do that is a lot when he’s at just one point in his NHL career so far. But unless he’s able to show he’s got something unique in his game, it’s hard to see a path for Liljegren’s success with the Leafs organization.