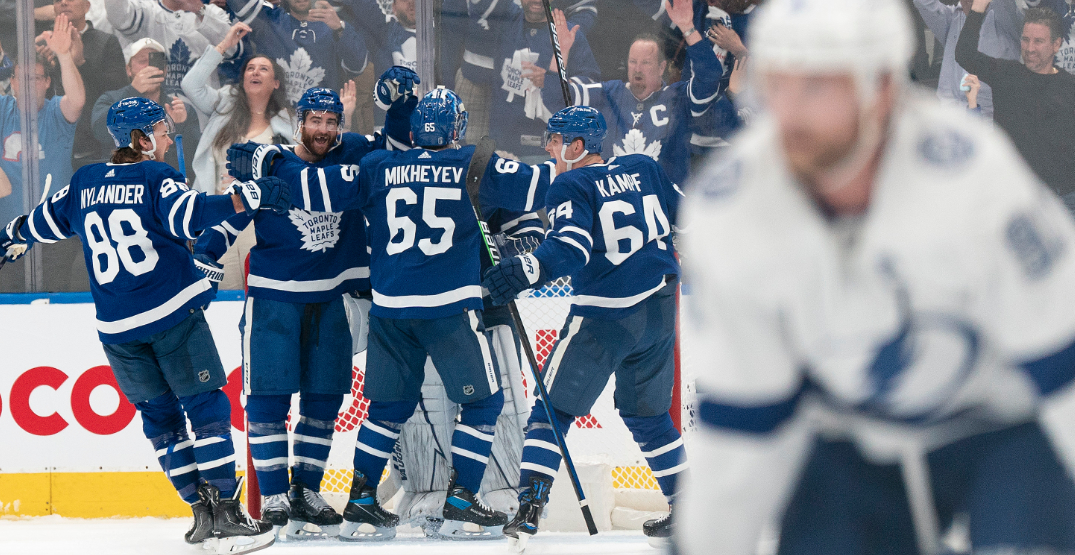 With the Leafs in a Game 7 scenario in their opening-round series against the Tampa Bay Lightning, Toronto could be on the verge of celebrating its first Stanley Cup Playoffs win in 18 years.

And ticket prices are reflecting that opportunity.

That chance comes in the do-or-die tilt against the two-time defending Cup champion Lightning, and it isn’t cheap.

Two tickets behind the Leafs bench will run a healthy $2,448.67 each, according to Ticketmaster, and a front-row seat to Toronto’s attacking zone, twice, is even more expensive at $3,056.25 apiece. A fan can park themself beside the penalty box for an incredibly lofty $4,890.00 per seat.

The most expensive offering is $6,372.89 for one ticket, a Row 1 option opposite the players’ benches, tucked between the blue line and centre ice.

Better check the couch cushions for some extra funds for that set.

The good news? There are still sub-$500 tickets available.

The bad news? They just happen to be in the 300 level.

A search of StubHub.ca reveals similarly-priced options. A Row 2 look is listed at a high of $5,909 each, meaning the pair topples $11,000 before additional fees. Someone looking to splurge can up the cost to $8,521 per seat for tickets right at centre ice, but 25 rows up.

The cheapest tickets on StubHub run a much more accommodating $420.

That’s an easier bill to swallow, especially if they lose.

The Maple Leafs lost Game 7 to the Montreal Canadiens last year, and haven’t won a playoff series since besting the Ottawa Senators in seven games in the Eastern Conference Quarterfinal back in 2004.

Since then, Toronto is 0-9 in games in games they’ve been able to eliminate an opponent — including four Game 7 losses.