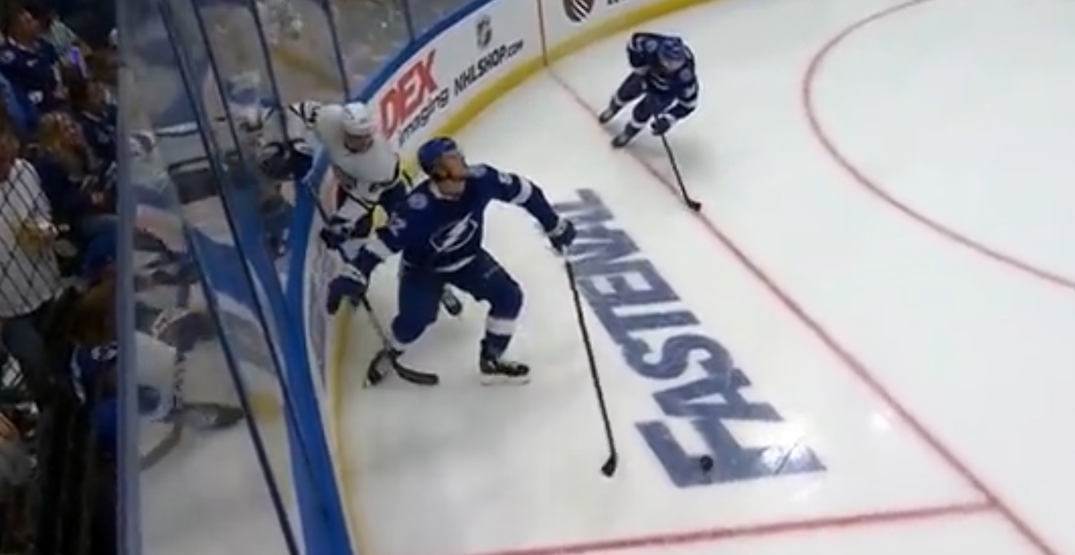 It hit him in the shoulder.

Toronto Maple Leafs fans still talk about a missed high sticking penalty on Doug Gilmour in the playoffs in 1993, which should have resulted in Wayne Gretzky getting ejected from Game 6 of the Conference Final. Toronto went on to lose that game, and they lost Game 7 as well.

If the Maple Leafs win Game 7, they won’t. But what if they lose?

Toronto had a 3-2 lead with under 12 minutes left in the third period of Game 6 before they ran into penalty trouble.

Leafs’ head coach Sheldon Keefe was furious at the Kerfoot call, seen on the broadcast yelling at the referee from the bench.

But it was the Kämpf penalty that really should have drawn the ire of the Leafs. Kämpf tried to lift the stick of Cal Foote, but missed, grazing the Lightning defenceman’s shoulder.

Foote flung his head back like he had been hit in the face with Kämpf’s stick, and the referees bought it.

IT HIT HIS SHOULDER! pic.twitter.com/C33fHawgt7

The Lightning took just two penalties in the game, and one of them was for embellishment.

But the Leafs had just one power play in the game, compared to three for Tampa Bay. That’s a hard pill for many Leafs’ fans to swallow, particularly given this missed holding call from Alex Killorn.

This might be worse than the phantom high stick and the missed too many men call. This is some clutch and grab era stuff. pic.twitter.com/pndV79OOhG

The weight of the world is on the Leafs now.

Toronto hasn’t won a playoff series since 2004, which is the second-longest active playoff series win drought in the NHL. They’ve lost in the first round every year since 2017, save for 2020 when they lost a play-in round game and didn’t even get to Round 1.

With their backs now against the wall against the back-to-back Stanley Cup champions, they need to win Game 7.