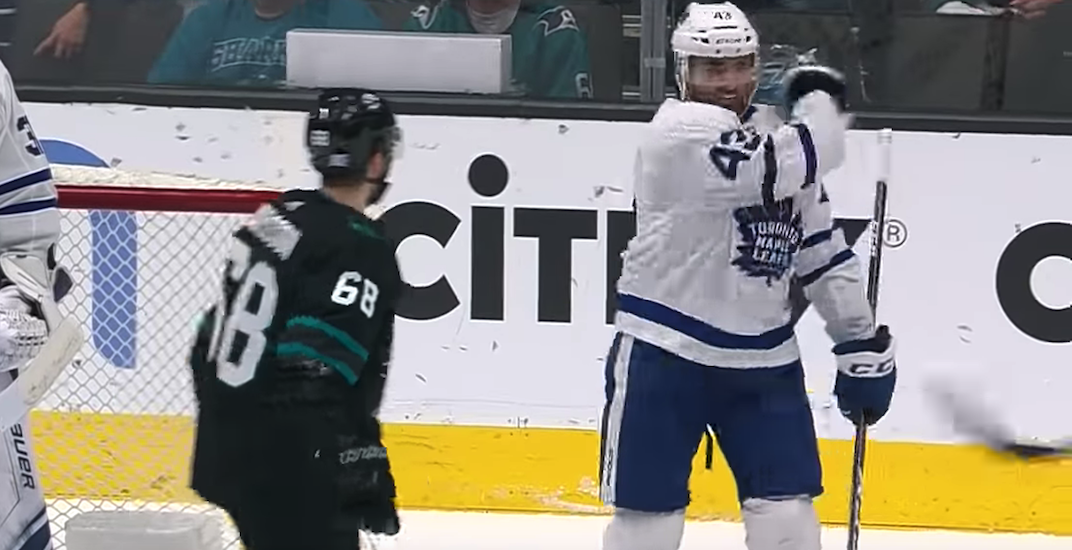 Jose Bautista’s bat flip may have inspired a generation, and not just in the sport of baseball.

Moments after a solid body check on Evander Kane, the Toronto Maple Leafs forward drove Karlsson into the end boards. Some gloved punches were exchanged, before Kadri decided to grab Karlsson’s stick and chuck it to the side.

Who did it better: Nazem Kadri or Jose Bautista? pic.twitter.com/gQkmJC0Xne

Kadri and Karlsson were each assessed double minors for roughing.

This wasn’t the only bit of rough stuff that Kadri was involved in on the night, as the Sharks appeared to be seeking some form of retribution for Kadri’s fight with Joe Thornton last season.

The fight resulted in a chunk of Thornton’s beard being ripped out.

San Jose was fired up, but it didn’t help them on the scoreboard, as the Leafs won 5-3.

“They may have been a little too worried about the wrong thing,” Kadri told reporters after the big win.

Kapanen on Sharks targeting Kadri: "I don't know what was going on, to be honest. I mean, Nazy loves that stuff & it got him into the game so I think that's a mistake by them. To go after Naz like that's not going to do anything to him, I think it's the opposite."

Kadri: "It was pretty clear that their game plan was to try & push us around & use their size to their advantage, but we have an identity of our own & that's speed. And we don't have guys who will stay down & give up so a good win for our group."