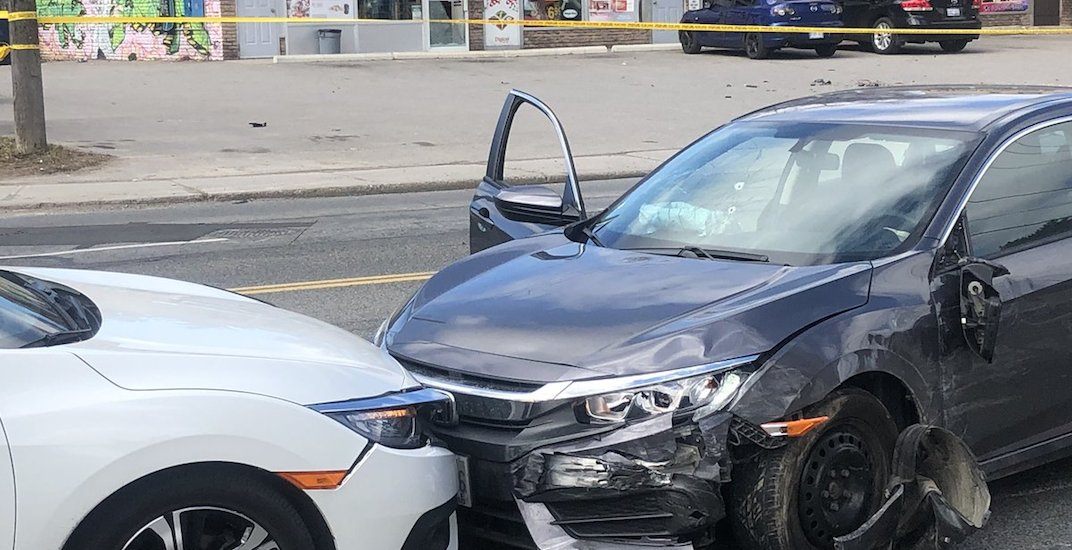 Toronto police are looking for multiple suspects following a brazen daylight shooting at a North York plaza that led to a head-on collision on Tuesday.

Police were called to the area of Jane Street, near Highway 400, on Tuesday, April 9, after receiving reports of shots fired.

When officers arrived at the scene, shell casings were located, and the K9 unit was involved in the search for the suspects, who police say fled the area.

According to police, two groups became involved in a dispute in a plaza in the area, which led to the gunfire.

David Hopkinson, a spokesperson for the Toronto Police, told Daily Hive a man then got into a car and fled the area, striking another vehicle head-on as he fled the scene.

While at the scene, police say they located one person suffering from minor injuries, which is believed to be related to the crash.

SHOOTING:
Jane St + Hwy 400
-Suspects have fled and may be armed
-Officers are searching the area
-Shell casing located
-K9 unit involved in search
-Police have located 1 person injured
-Injury appears to be from collision
-Not life threatening
^dh

Chaminade College School on Queens Drive was placed in hold and secure while officers conducted their investigation. Some TTC routes were also on diversion in the area.

Images and a video shared on social media by a bystander show the two vehicles that had crashed head-on. One of the vehicles appeared to be riddled with bullet holes.