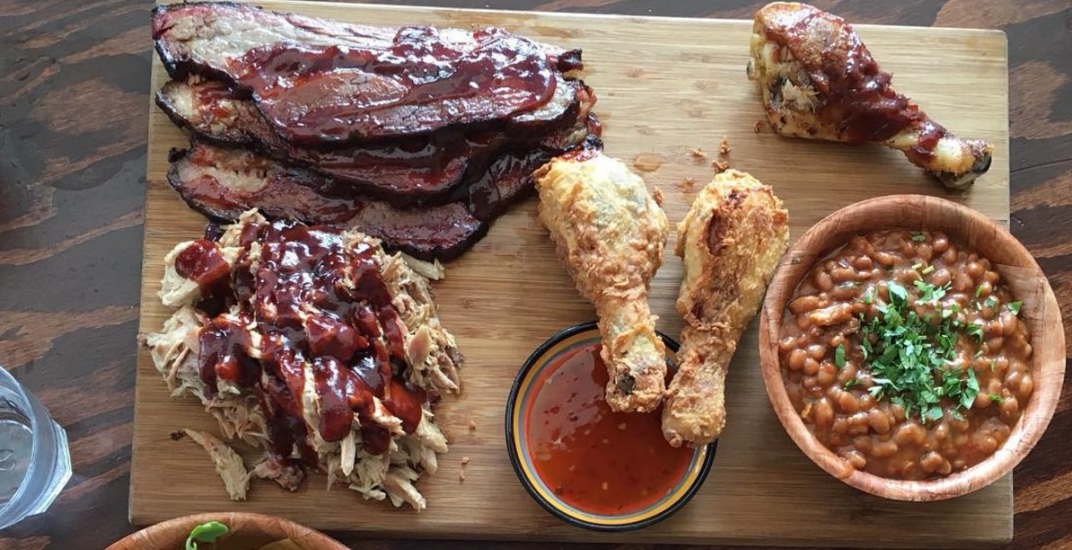 Nothing says summer like firing up the grill for a backyard barbecue, but like all good things, BBQ season must come to an end.  Here’s where you can get your fill of the grill all year round in The Hammer.

Hope you have a napkin handy, this is guaranteed to get messy.

Memphis Fire Barbeque Company’s Ole Hickory Pits smoker runs 24/7 and can hold 500 pounds of meat at one time. If that doesn’t paint a picture of just how much meat this place cooks up, the Southern-style barbecue joint feeds over 80,000 people a year.  The Popp family opened Memphis Fire in 2010 with a 50s diner vibe and commitment to from-scratch, honest cooking.

They named the restaurant after their Memphis Fire Dry Rub, a product in their spice blend company, Jet Set Spice Company, which launched in 2002. From buttermilk fried chicken and award-winning baby back ribs to smoked wings and their “no drive-thru, no problem” burgers — plus a killer breakfast — the menu is extensive and all made with love. Order the slider combo for a taste of their three legendary meats: pulled pork, beef brisket, and a mini burger.

The best part about Salt Lick is enjoying good food with good friends. Their dinner service is family style which means you agree on what meats and sides you would like to share as a table. You can choose 3, 4, or 5 meats and the kitchen will portion your meat board based on the number of people at the table.

If you like BBQ, beer, bourbon and blues, you’ll love Lou Dawgs, a Southern BBQ joint in Hamilton’s Hess Village (with other locations in Toronto, Waterloo and London). Devoted to serving “good times” with a side of live music, Lou Dawg’s offers a menu of smoked meat sandwiches, wraps, tacos, nachos, ribs, meat platters with your choice of sides, weekend brunch, and more. Try the famous Loutine (pulled pork poutine) with different toppings or the BBQ platter for a bit of everything: deep fried pickles, dry rub wings, half rack of ribs, small Mighty Loutine, two meat sampler, coleslaw, potato salad and a jalapeño cheddar corn muffin. Now that’s a feast!

Brought to you by Southern Smoke Food Truck (launched in 2012), this fast casual restaurant opened three years later and smokes its meats on a 9-foot long lang smoker with a mix of apple and cherry wood that can hold up to a thousand pounds of meat. Come for a pint of local craft beer and order something from the pit or from the fryer, plus Southern sides like mac and cheese, hush puppies, beans, slaw or corn muffins.

Try a burger, sandwich, or a pit platter for a taste of the ribs, fried chicken, pulled pork, beef brisket, and more. The Beefy Brisket Melt, Carolina Pulled Pork Sandwich and Fastest Chicken in the South pulled chicken are fan favourites on both the truck and restaurant menu.

Simply put, this place is your local neighbourhood BBQ joint. Opened in 2009, it has a casual atmosphere and darn good pork and beef ribs. Order your food at the counter and pig out on the melt-in-your-mouth brisket, pulled pork, chicken, and ribs hot off the wood smoked barbecue.

Meats are rubbed with spices, hickory smoked low and slow, and smothered in BBQ sauce done three ways: smoky mild, tangy tequila, or spicy. The dish to order here is the ribs — and the rib dinners come with fresh cut fries, beans, slaw, and cornbread so come hungry!