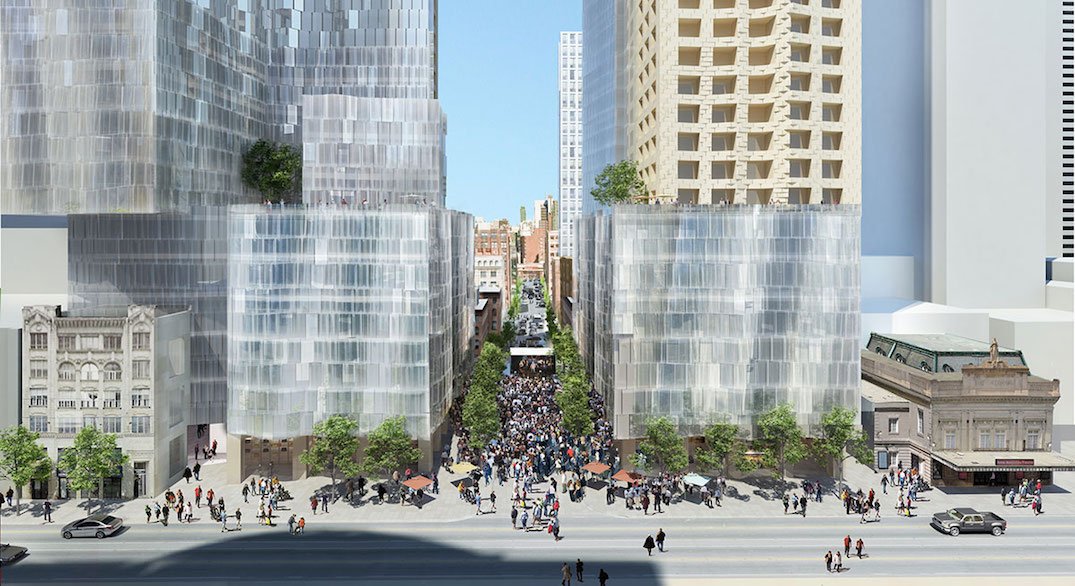 A massive King Street development by Mirvish + Gehry has been acquired.

Local developer Great Gulf and Ed Mirvish Enterprises announced on Monday that they have reached a sale agreement on the proposed landmark Mirvish+Gehry project in the heart of Toronto’s downtown entertainment district.

Once complete, the development at King Street and Duncan Street, will feature the tallest residential structures in Canada.

“I am pleased to have concluded a transaction with Great Gulf that will see the realization and fulfillment of my vision for Mirvish+Gehry Toronto,” said David Mirvish, President, Ed Mirvish Enterprises, in a release. “I am delighted to have completed the development process that allows Great Gulf to create a wonderful addition to the Toronto skyline.”

First proposed in 2012, the new King Street development will comprise two towers with 82 storeys in the East Tower and 92 in the West Tower anchored by a multi-level podium. The site is zoned for mixed use including retail, office, institutional, hospitality and condo suites in the towers.

The plan includes over 85,000 sq. ft. of multi-level retail opportunities in the heart of Toronto’s Arts and Entertainment District, along with approximately 115,000 sq. ft. of office space.

This development plan also includes the preservation of the Princess of Wales theatre and includes space for art exhibitions and the OCAD University.

“We are very excited to add this signature project to our Great Gulf development portfolio. It will be Toronto’s first internationally acclaimed development from one of the world’s most celebrated architects, Frank Gehry,” said Great Gulf president Christopher Wein. “It’s a magnificent development opportunity and aligns well with our vision to build iconic state-of-the-art developments.”

Mirvish said that in Great Gulf, they have selected a developer who is capable of executing  Frank Gehry’s vision, and will work well with him to bring the project to realization.

“I believe the project will do honour to the history of the people in the city who built it to what it is today and will continue to project Toronto’s possibilities onto the world stage,” he said.

The two proposed residential towers will include 1,949 residential units located on 260-322 King Street West between John Street and Simcoe Street. Initially, the plan included three towers, but it has been reduced to two to make the area more pedestrian friendly. The goal, according to the developers, of the high-rise project to “focus on making the neighbourhood at King ad John St. a cultural corridor” and will be completed in phases.

“Toronto is truly a global city and this development will continue to build our reputation on the world stage,” said Wein.