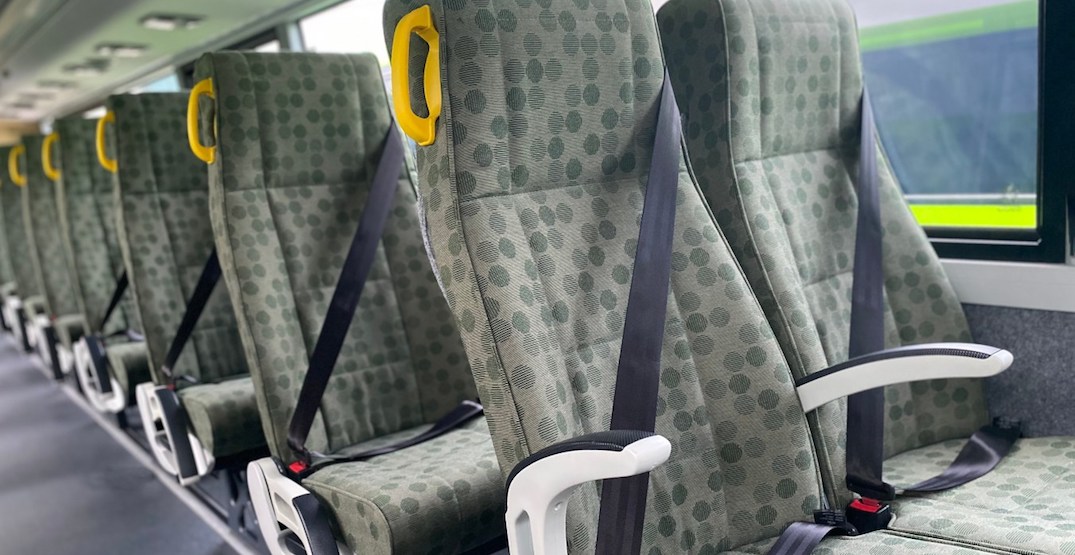 Riders boarding any one of GO Transit’s brand new buses will find an additional safety feature at every seat: seatbelts.

After many years of seatbelt-less buses, GO is rolling out a new fleet of 46 buses this month equipped with passenger seatbelts.

“Although this may feel like a big change for GO bus passengers, we know it’s second nature when they travel by car,” said Eve Wiggins, Metrolinx vice president of bus services.

The change was spurred by Transport Canada’s recently passed legislation mandating that all medium and large highway buses built after September 1, 2020, have seatbelts for passengers.

The legislation, Metrolinx says in a blog post, was drafted, in part, in response to the deadly April 2018 bus crash in Saskatchewan where a motorcoach carrying the Humboldt Broncos was struck by a semi-trailer truck. The tragic accident left 16 people dead and 13 injured.

“Our job over the coming months will be to communicate clearly, effectively and often with our customers to ensure they buckle up if they board a bus with seatbelts,” Wiggins said. “It’s the law, and seatbelts add to the safety measures already built into our GO buses.”

Anyone travelling with children will be responsible for ensuring that the child is properly secured, Metrolinx said.

Metrolinx is also currently looking into retrofitting its fleet of highway buses that were built prior to September 1, 2020, even though the law does not require it. Right now, they have 166 single and 267 double-decker buses.