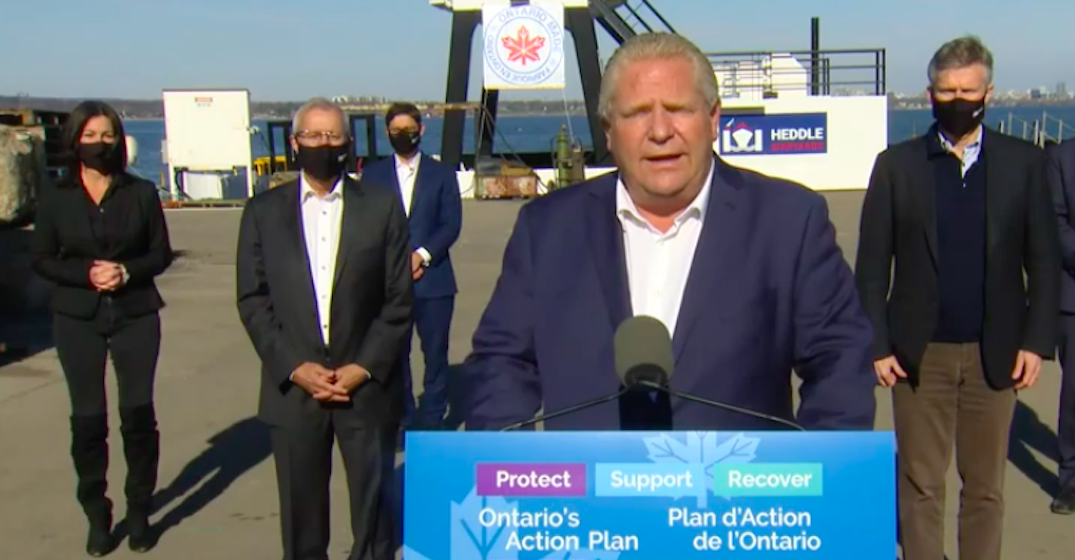 Premier Doug Ford says he is trying to avoid a complete lockdown “at all costs” as COVID-19 cases keep breaking record highs in Ontario.

While addressing reporters on Thursday, Ford was asked about a Kitchener restaurant that potentially exposed 175 patrons to the virus. He responded, “It infuriates me when I hear these stories.”

“We’re all trying as hard as we can. We’re working around the clock, but then you have these reckless folks who don’t practice social distancing or [wear] face masks,” he said.

The premier noted that if people don’t follow the health protocols, “it is not going to be good for all of us. What we’re trying to do as a government at all costs is to avoid a lockdown, a complete lockdown. If people keep doing foolish things like this and numbers keep going up, then I’ll have to deal with it.”

He added that more inspections need to happen in businesses to ensure they’re following health protocols, noting that 24,000 to 25,000 have been inspected but that they need to “continue ramping it up.”

Ford said that the government has to strike a balance when keeping the economy running while also keeping people safe.

“The easy thing to do is sit back and shut down the whole province. But how do you deal with the mental health of people? It’s easy for people to say shut things down when they have a pay check every week. The approach of saying shut everything down is not what we’re taking,” he said.

Earlier on Thursday, the Ontario Medical Association (OMA) called for the Ford government to impose tighter restrictions. They said that the new colour-coded system released last week — which places regions into five colour-coded categories depending on their epidemiological trends — was insufficient at a time when the province is reporting record-high numbers.

Ford’s Tuesday remarks contradicted what he said today, noting that he can’t “rule out anything” when it comes to another Ontario lockdown.

When he was asked if Ontario will be put in a lockdown like Manitoba due to rapidly rising numbers, he said, “I can’t rule out anything. We’ve shown before if it needs to be done and we’ll do it.”