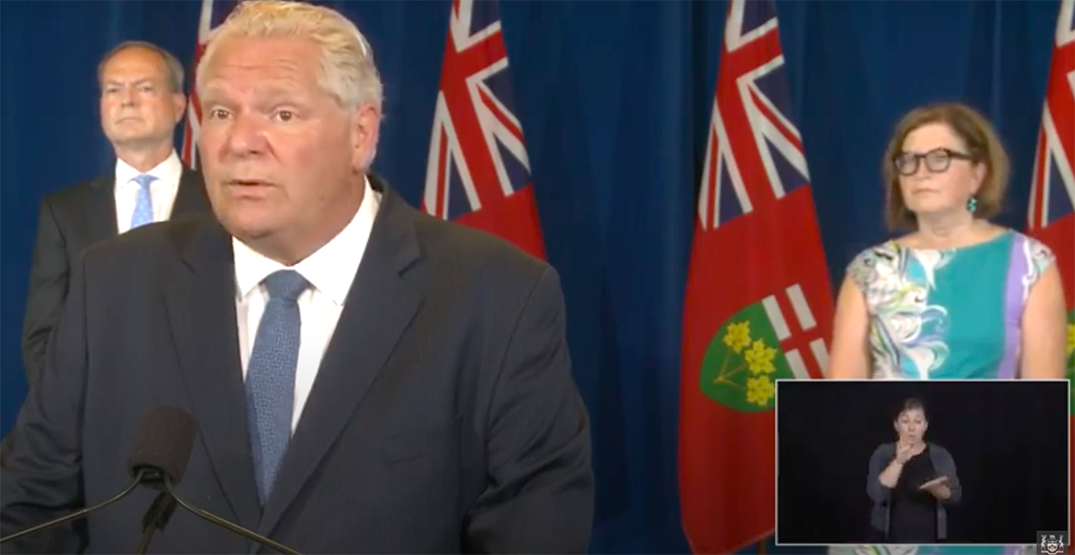 Premier Doug Ford has some choice words for people who think that the pandemic is over ahead of the long weekend, and asked them to look south for a reason why.

When unveiling Canada’s new contact tracing app on Friday, Ford encouraged people to download it and reminded everyone that following the doctor’s orders when it comes to social distancing and staying safe.

“We’ve seen what happened if we don’t listen to the advice,” Ford said during his daily briefing on Friday.

“A month ago our neighbours in the US were heading into the July 4 long weekend. The numbers were down, schools were set to open in four to six weeks, bars and restaurants were reopening. That long weekend people went to parties beaches and gathering acting like COVID-19 was over. You only have to look at what’s happened since then to know how devastating how it has been.”

Adding that some regions are now not letting their kids go back to school, and forcing businesses to shutdown, he encourages a return to the basics when keeping safe.

“We don’t have to down that road. It’s up to us to write the next chapter. We have to practice physical distancing, wear a mask when required, wash hands frequently, and avoid large gatherings and parties,” he said.

Ford has been clear in his thoughts of people who break distancing regulations, especially to party. Earlier this week, after reports of an over 200 person party in Brampton, he expressed similarly strong sentiments, suggesting the host should pay the maximum fine allowable under law.

“The full extent of the law needs to be thrown at these people,” Ford said at the time. “Throw everything and the kitchen sink at them. The $100,000, everything else.”

Pointing out that everyone from small business to health care workers are struggling during the crisis, he slammed the “jokers out there” who continue to hold these types of events.

“You’d think the cheese slipped off the cracker with these people, they just don’t get it,” he added. “We’re all in this together.”

This is a surge from Thursday’s 89 new cases and Wednesday’s 76 new cases, the lowest reported figure since the end of March.