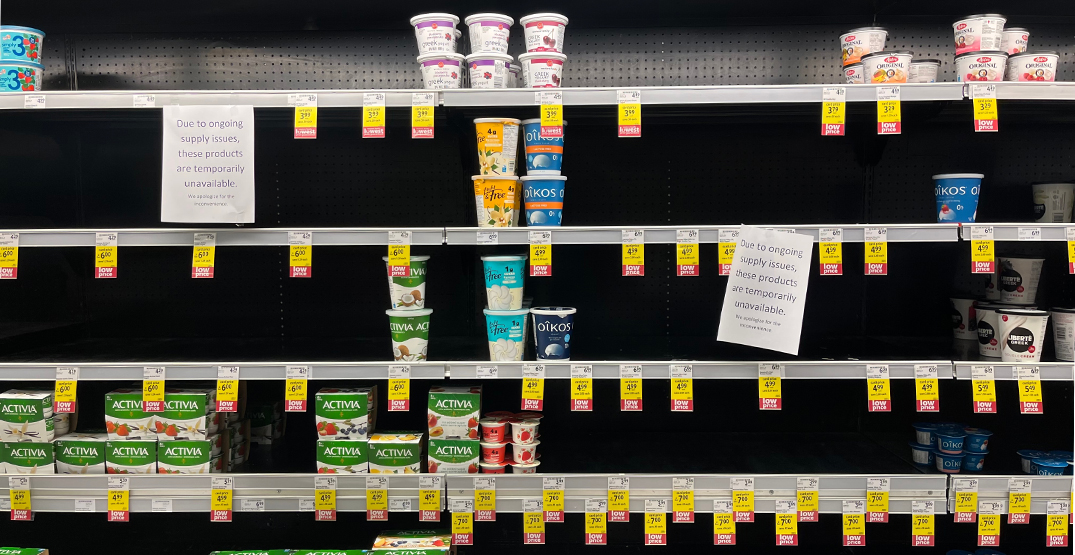 The dairy section of a Save-on-Foods in Edmonton in December 2021. (Velour Noire/Shutterstock)

Lately, there have been lots of images of empty Canadian grocery stores circulating online.

As “Freedom Convoy 2022” makes its way to Ottawa to protest the vaccine mandate on cross-border truckers, some politicians are blaming these empty aisles on the federal government’s policy.

Earlier this week, Alberta Premier Jason Kenney called on Prime Minister Justin Trudeau to reverse the policy requiring truckers to be fully vaccinated in a tweet. It included photos he said he received of empty grocery store shelves across Alberta.

I’m getting pictures like this from grocery stores across Alberta this morning.

This is turning into a crisis. It requires immediate action by the Canadian & US governments. pic.twitter.com/nEmbSgX2BU

While the pandemic has put pressure on the food distribution industry, experts say that Canadians should not be worried about major food shortages, and to be weary of the political agendas behind these messages.

“We’re trying to stress that Canadians should have no concerns about food availability,” Retail Council of Canada (RCC) spokesperson Michelle Wasylyshen told Daily Hive. “There’s no threat to the overall robustness of the food supply system.”

The RCC represents retail businesses including large grocery store chains and pharmacies across Canada. Wasylyshen says that many of their grocers haven’t reported any issues that are particularly difficult to manage.

Sylvain Charlebois, director of the Agri-Food Analytics Lab at Dalhousie University, says that the conversation has been far too politicized.

“The unfortunate thing right now is that some groups are politicizing the issue, which is probably prompting people to be concerned,” Charlebois told Daily Hive.

Both experts don’t deny that there are empty shelves showing up across the country, but stress that there are a number of factors at play that go beyond what we’re seeing in politics.

A delay of goods — not a shortage

“In most cases we’re seeing a delay of goods, and not a shortage,” explained Wasylyshen. “If there is a bare shelf, it should hopefully only be temporary in nature until it’s restocked.”

Charlebois agrees and adds that variety of goods may be impacted as well.

“I think it would be appropriate for consumers to readjust expectations as they walk into the grocery store for the next little while,” said Charlebois. “At least for the next six months.”

As for what’s causing these delays and reduction in variety? Well, it’s complicated.

Wasylyshen says that while the RCC is continuing to monitor the situation, they can’t boil it down to the vaccine mandate on truckers since it’s only been in place for a week.

Canadian’s have probably been inundated with news about supply chain issues, which Canada’s transportation minister blames on the pandemic, according to an interview with CTV’s Power Play.

The supply chain, which is the network between a company and its suppliers that produce and distribute a product to a consumer, has been credited in its contribution to the rise in food prices and Canada’s highest annual inflation rate since 1991.

“[COVID-19] we’ve seen throughout the pandemic has put pressure on every node of the supply chain,” said Wasylyshen.

She says it’s resulted in increased transportation costs, increased packaging costs and many other issues. While they don’t know when, or if these issues will phase out, Wasylyshen highlights that retailers are experts in handling supply chain constraints, especially having worked in a COVID environment for two years now.

“There is some supply chain fatigue and I think we need to appreciate how resilient the food industry is,” added Charlebois. “I have no doubt that it will continue to deliver.”

The surge in Omicron cases across the country also factors into food delays and empty shelves.

“[It] has really affected the ability of the industry to operate when 15 to 20 people are sick at the same time,” said Charlebois.

In fact, some Canadian grocers have decided to operate at 50% capacity to reduce the spread of Omicron.

Wasylyshen explains how weather events like that can lead to product shortages and delays because trucks have a difficult time travelling in bad weather, so it can take some time to replenish stores.

“I was speaking with a number of our members late last week and into this week, and it’s my understanding that many of the stores that were experiencing shortages were restocked to the greatest degree possible,” she added.

Another example is the BC floods back in November, where hoarding emptied grocery store shelves. 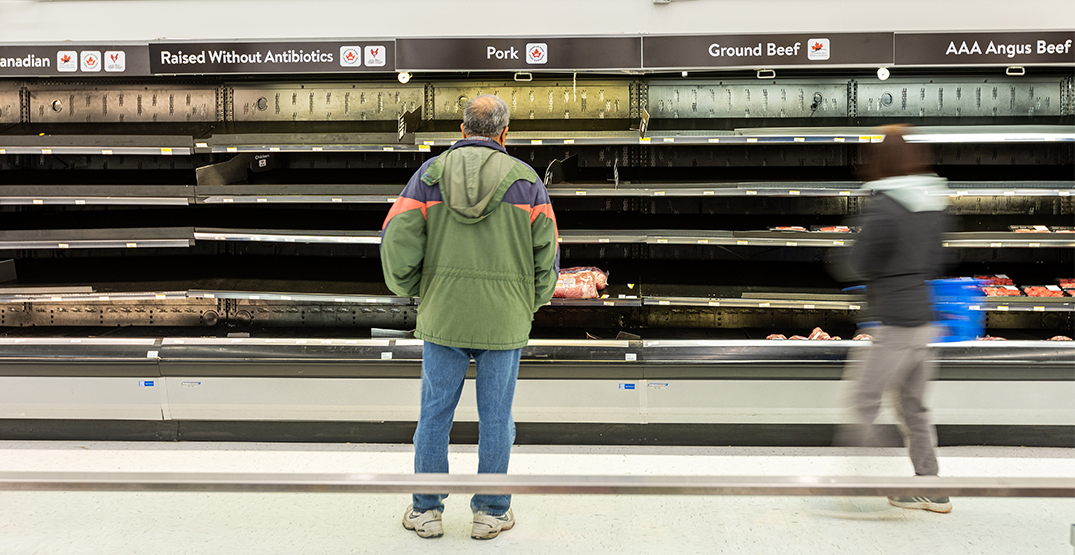 Empty shelves in the meat section of a BC grocery store in November, 2021. (TommyLeiSun/Shutterstock)

What Canadians can do

Both Charlebois and Wasylyshen say Canadians may have to be flexible with what’s available in grocery stores for the next few months.

“We should expect that the availability of certain items in some categories will continue to be tighter than in years past,” said Wasylyshen. “It means that shoppers may have to substitute to a different model, or brand, or food item, or come back in a couple of days.”

Charlebois adds that this is a good time for Canadians to practice not over buying produce and food items.

“If there’s one thing that consumers can do right now, in this context, is to actually reduce [food] waste,” he said.