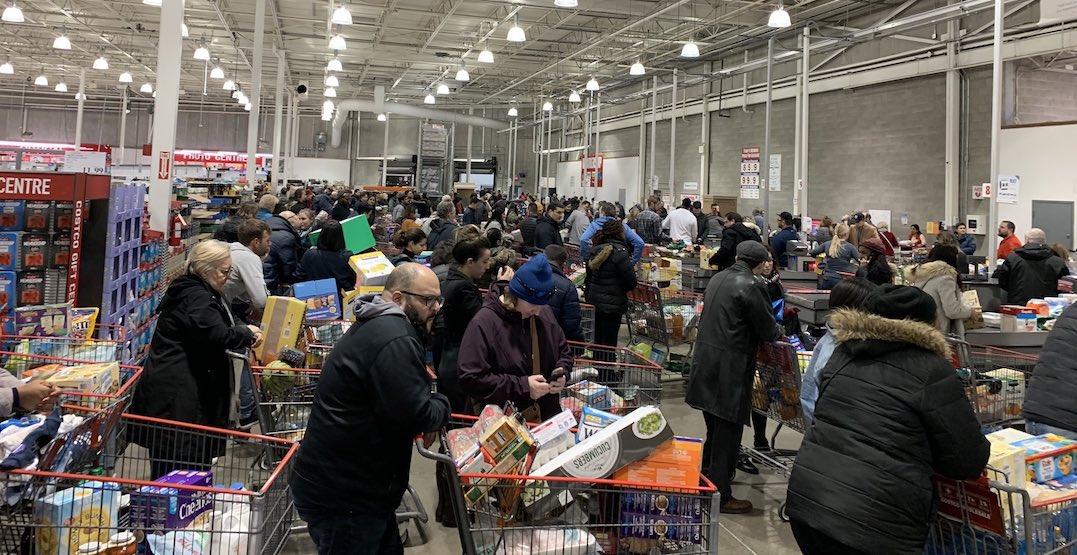 Concern — or perhaps “panic” is a better word — has gripped the GTA in the last couple days as the nation, alongside the rest of the world, doubles down on its response to COVID-19.

And the city has the grocery store lines to show for it.

On Wednesday, the World Health Organization declared coronavirus to be a pandemic. By the end of Thursday, the NBA had suspended its season, the JUNO Awards were called off, and Ontario opted to extend March Break for an additional two weeks.

Also on Thursday, many across the GTA were met with massive crowds when they attempted to visit a grocery store.

From carts filled with toilet paper to aisles empty of rice, Lysol wipes, and other disinfectants, the city is stocking up on what people perceive to be essentials, en masse.

So if you need to stop by No Frills to pick up some sweet potatoes for tonight’s shepherd’s pie, heed warning… you’re probably going to be waiting in line for a while.

Here’s a look at grocery stores across Toronto and the GTA right now:

Line up for the cashes at Loblaws College Square. pic.twitter.com/vSPlauwxJl

This is a grocery store at 9am on a Friday in Toronto pic.twitter.com/1GnIudCJck

If the global economy is collapsing and you’re just tweeting about cannabis all I can say is get woke fam… shots from Toronto grocery stores last night. 🥴 pic.twitter.com/cfLlRdhMT8

First time I’ve lived through a panic storming of grocery stores. All I wanted was apples and yogurt. 45 minute wait to cash out at Loblaws. No thanks.

Is it possible people in Toronto are overreacting just a little? Or are we at this point now? pic.twitter.com/xOQ1von4Wk

Decided to buy groceries today. So did everyone else. I feel bad for the one dude that came in for mac&cheese from the hot counter though. 🧀 #Toronto #covid19Canada pic.twitter.com/E4nna6D5Jl

Opposite of #socialdistance? #Panic! As a #biohacker, #caregiver & #germaphobe, I buy groceries in the evening to avoid OPG (other people’s germs). Not tonight #lol. A few tips: 1. Wear gloves 2. Wipe groceries 3. Breathe thru nose in a crowd. #Namaste #Toronto #CoronaVirusUpdate pic.twitter.com/VzjpWPlpwV

All I have to say is; if you haven’t stocked up on essentials by now… Good Luck.. Literally no toilet paper and barley much pasta left. This woman told me it’s her 4th store and she can’t get toilet paper anywhere. The lineup doubled up in the No Frills I was at around 2pm. pic.twitter.com/8EkF5PiE4a

my sister sent me this video of our nearby No Frills; stay safe out there y’all #coronavirus #COVID19 pic.twitter.com/jxUGfDqyLa

Today by noon in GTA pic.twitter.com/Yns8CsFIvP