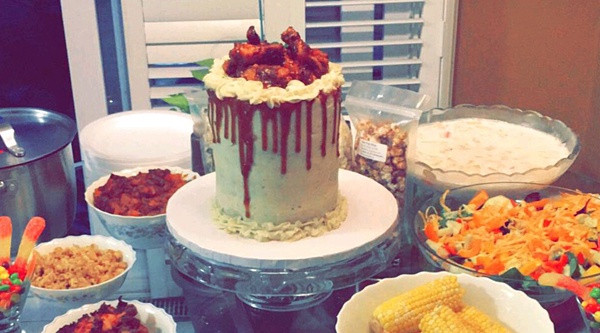 It’s not too early to be thinking about Christmas, especially if you intend on ordering one of these festive cakes from consignment baker, The Pop Shop.

The savoury creation inspired by the Soul Cakes from LA bakery Bree’s made its debut at Caesar’s own Thanksgiving dinner this year (oh to be the guinea pig in that family), and then posted a photo to Intsagram with the hashtag, #thiswillbeavailableforchristmas.

The cakes, dubbed, The Main Course, feature layers of cornbread alternating with stuffing, cranberry sauce, candied yams and mac ‘n cheese. It’s then frosted with mashed potatoes, drizzled with gravy, and crowned with a pile of chicken wings.

So #happy that I got to make a #soulcake today! Been missin this baby! Haha 😍 #myfavorite #breescakes #savory #cakes #cake #savorycake #losangeles #bakery Buttery corn bread layered with mac and cheese and candied yams frosted with mash potatoes.. drizzled with gravy and topped with crispy fried chicken! #theORIGINALsoulcake

Pre-orders for pick-up in Ajax are available with one week notice, though Caesar is looking into participating at pop-up markets in downtown Toronto over the holiday season. A whole cake will sell for $75, meanwhile slices called “leftover plates” will sell for $15.