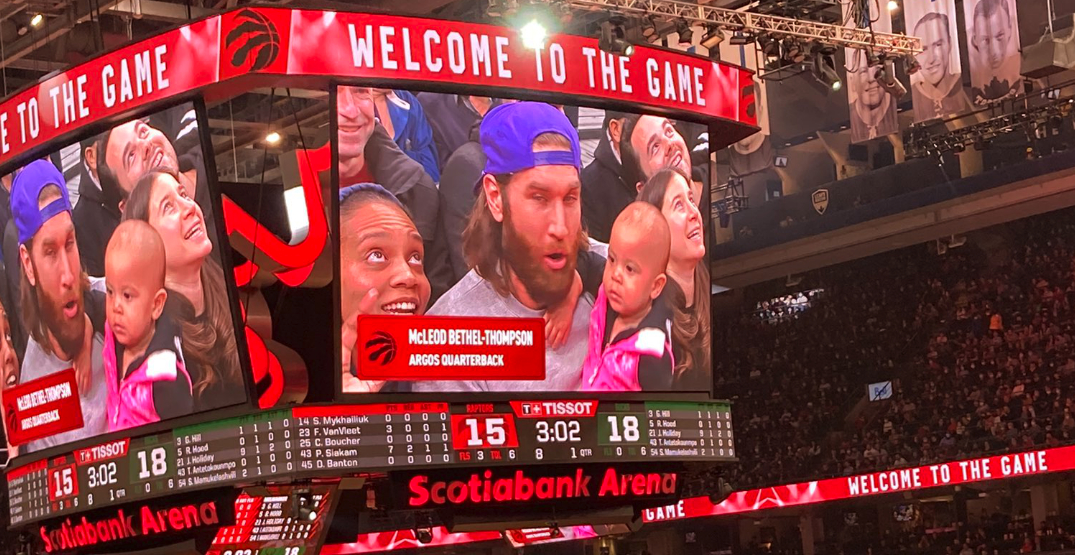 Toronto Argonauts quarterback McLeod Bethel-Thompson might have put his playoff status in jeopardy by attending a Toronto Raptors game at Scotiabank Arena on Thursday.

Bethel-Thompson is being held out of practice Friday for attending the game, a violation of the CFL’s COVID protocol which states he must now quarantine for four days, according to TSN’s Dave Naylor.

A four-day quarantine would rule out Bethel-Thompson for the Argonauts’ East Division Final against the Hamilton Tiger-Cats at BMO Field on Sunday.

Hearing @TorontoArgos QB MacLeod Bethel-Thompson has been sent home and is being held out of practice today because of attending the @Raptors game at his team’s request. It’s a violation of CFL Covid protocol, which states he must now quarantine 4 days. Game day is Sunday.#CFL

The Argonauts are owned by Maple Leafs Sports & Entertainment Partnership, the same group that owns the Toronto Maple Leafs, Raptors, Toronto Marlies and Toronto FC, among other entities.

The Raptors, and Toronto Maple Leafs, require a COVID-19 vaccination or negative test to attend games.

The potential loss of Bethel-Thompson could put a Grey Cup berth in jeopardy for the Argos.

Bethel-Thompson was sixth in the CFL with 12 touchdown passes and 2,303 passing yards this season. He was fifth with 203 completions on 306 pass attempts.

Antonio Pipkin, who had 13 completions on 26 attempts in parts of three games could be in line to start at quarterback for Toronto if Bethel-Thompson is ruled out. Cole McDonald, who attempted four passes this season, is also listed on Toronto’s roster.

Just arrived at #Argos practice. McLeod Bethel-Thompson is not here and Antonio Pipkin is taking reps with the starters. #CFL

Though Bethel-Thompson attended the game, Tiger-Cats receiver Brandon Banks was told he couldn’t attend a Raptors game this week.

“Wow when I tried to go to Raptors game the CFL told me I couldn’t go,” Banks tweeted.

Wow when I tried to go to raptors game the @cfl told me I couldn’t go ! I ain’t snitching but shit fishy ! #Protocol #tier1 https://t.co/iVuowKAPI1

UPDATE: The CFL has issued an update that could allow a scenario where Bethel-Thompson plays Sunday.