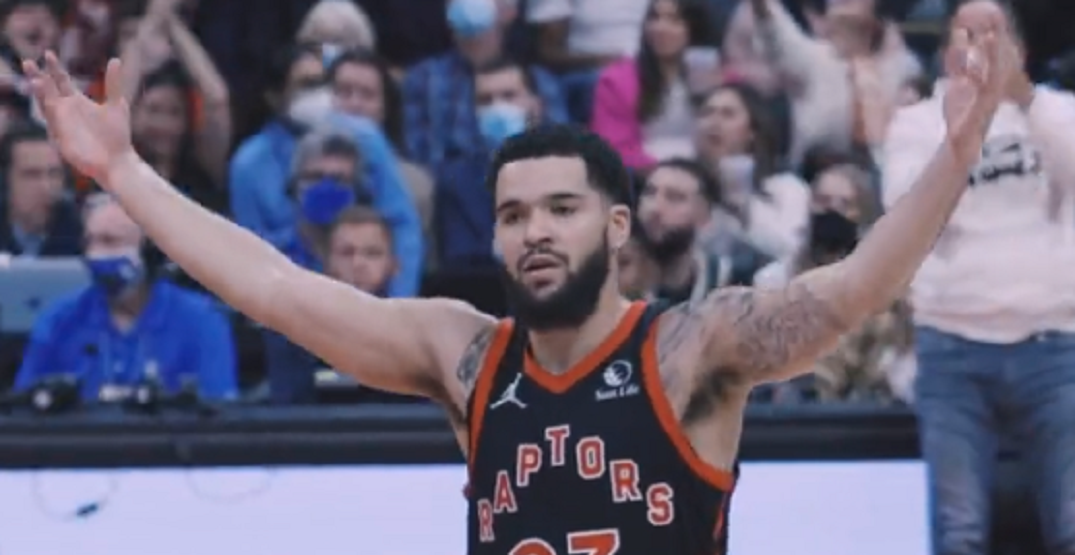 After entering halftime with just three points, VanVleet ended up scoring a game-high 29 points in a 97-93 win over the defending champion Milwaukee Bucks.

The Raptors now sit 10-13 on the season, 12th in the Eastern Conference. Making a playoff run is still an uphill battle for a team that’s dropped 10 of their last 14 games, but they’re also just 2.5 games back of sixth place in an extremely tight conference.

With a little over three minutes to go against the Bucks, VanVleet hit a driving finger roll that put the Raptors up 91-85.

But while the late basket was crucial in the Raptors’ victory, it was the moment afterwards — with VanVleet outstretching his arms and further firing up the home crowd — that emphasized what a key win this was for Toronto.

“It was just one of those moments. Given the circumstances, I think everybody in the building deserved the win, including the players,” VanVleet said of firing up the crowd. “I just wanted to give us some energy and some momentum going into those last two or three minutes.”

But that wasn’t the only moment Raptors fans were loving from Fred VanVleet.

After a back-and-forth final minute that saw a total of 11 foul shots between the two teams, the Raptors found themselves up by four with the Bucks inbounding the ball with 0.7 seconds left. Essentially, the Raptors just needed not to commit any more fouls, and they’d end up victorious.

The TSN broadcast caught VanVleet emphatically telling his teammates not to “f*cking move” and clinch the win.

They didn’t, as the Bucks’ Khris Middleton clanged off a three-point attempt that still wouldn’t have changed the game’s outcome had it dropped.

The Bucks entered Thursday night on an eight-game winning streak. Two-time MVP Giannis Antetokounmpo was sitting due to rest, announced just 30 minutes before tipoff. Had he played, the final result might’ve looked differently, but VanVleet said the Raptors just had to formulate the game plan around who was in the lineup.

“You don’t flinch,” VanVleet said. “In the back of your head, you just thank the man upstairs [that Antetokounmpo was sitting], and you go out there and try to get a win.”

VanVleet touched on the Raptors’ need for humility as they look to climb back up the standings.

“We are very pampered, spoiled guys, and we make a lot of money, and everybody in our world is telling us how great we are,” VanVleet said. “But sometimes you’ve got to have people to tell you the truth, and you’ve got to be able to accept that.

VanVleet added that the team’s young players like Scottie Barnes and Precious Achiuwa have stepped up in prominent roles this year.

“I don’t know if any of these guys asked to be in this position where so much is being asked of them,” VanVleet said. “But the situation is not changing anytime soon.”

The Raptors will next be facing the Washington Wizards at home on Sunday, with tipoff set for 6 pm ET.