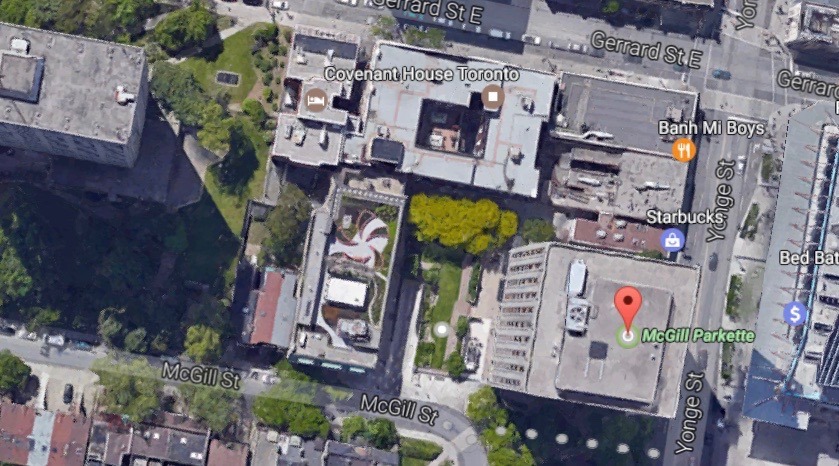 On Wednesday night, someone on r/Toronto pointed out that the McGill Parkette in downtown Toronto was empty.

Ordinarily, an empty Parkette on a Wednesday night in Toronto wouldn’t be something worth noticing, except for the constant ringing sound being emitted from the office building at 415 Yonge Street that interrupts the public space.

According to the anonymous Reddit user, “The building owners have put devices on their outer walls which emit a noise apparently only audible to persons under the age of 29.”

In case this sounds new (or unbelievable) to you, know that these devices definitely do exist, and the ones the management at 415 Yonge Street appear to be using describe their purpose as follows:

The new Mosquito MK4 Multi-Age now has two functions. Either set the device to 17KHz to disperse groups of troublesome teenagers OR set it to 8 KHz to disperse people of any age from areas where loitering can be an issue such as subway terminals, car parks or any areas where people feel insecure at night due to other people loitering in the shadows etc. 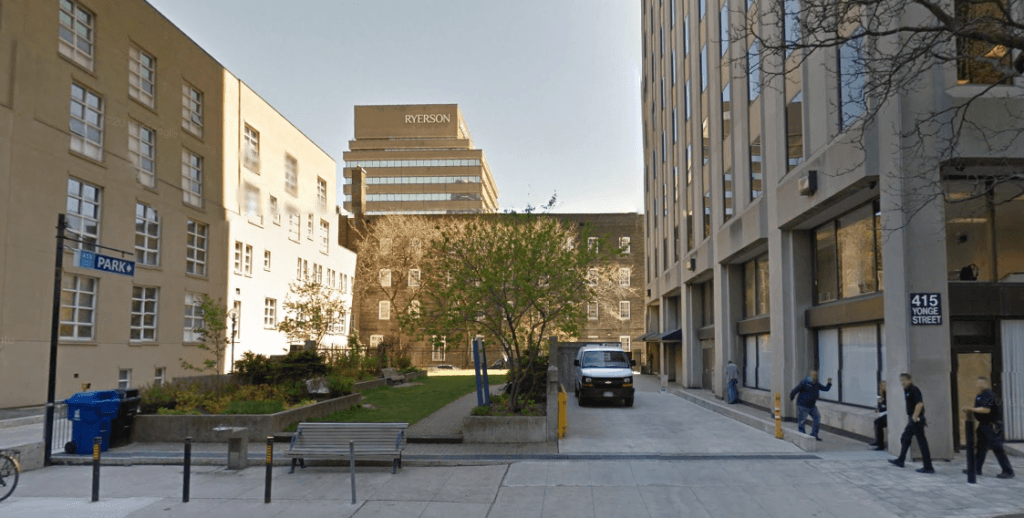 Two hours after that first comment on Reddit, Toronto resident David Angelovich posted an update to the thread.

Angelovich, a systems administrator/engineer who lives across the street in the Aura building, thought he would walk over to validate the claim.

“I went across the road about 8:40 pm last night, and first just went into McGill Parkette,” Angelovich told Daily Hive. “The noise was evident, though if you didn’t know what it was, you’d probably assume it was some generic high-pitched building machinery noise.”

Angelovich found two of the Mosquito MK4 Multi-Age devices, one on a small maintenance building not actually attached to the 415 Yonge Street building, as well as another on the main building. Both devices were caged to prevent tampering (the device on the maintenance building is also paired with a security camera) and one is pointed directly into the parkette.

Using an audio spectrum analyzer app, Angelovich also recorded the noise to demonstrate the 16-17k level (consistent with the Mosquito’s capabilities), also showing that the sound is considerably louder than any other noise in the area: 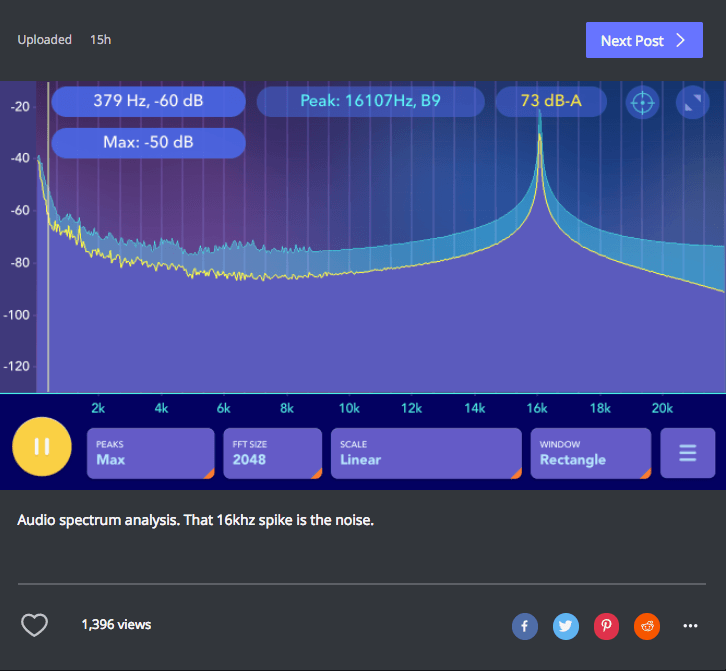 Angelovich then “printed up signs for the noticeboard outside the building indicating the issue, and posted them on the Community Noticeboard at approx. 9:30 pm.”

But when he checked on them again today at 8:30 am, the notices had been taken down. Angelovich then went into the 415 Yonge Street office to request a management contact only to find the person behind the desk holding the posters he had made. Both the Artis REIT employee behind the desk and a security guard argued with Angelovich that “Bad things happen in that park.”

In an email to Daily Hive, a representative for Artis REIT management responded to our questions regarding the use of noise devices used to deter loitering in the McGill Parkette with the following:

“We are already on it and have taken steps to research our position and mitigate.

We believe we are legally in a good position; no violation of by-laws or human rights that we are aware of.

We will turn off during the day and turn on only at night as a compromise to appease any protest or objection. No formal response or complaint from the City yet.”

Two important things to note here are that Angelovich has already filed a complaint to the city, so they should now be aware of the situation. The second thing to note is that everything Angelovich points out about the noise devices does appear to be in violation of of a Toronto by-law, specifically Toronto Municipal Code Chapter 591 – Noise, in which it clearly outlines in ARTICLE II General Provisions that, “No person shall make, cause or permit noise or vibration, at any time, which is likely to disturb the quiet, peace, rest, enjoyment, comfort or convenience of the inhabitants of the City.”

Before then going on to specifically define under section § 591-2.1:

No person shall emit or cause or permit the emission of sound resulting from the operation of any electronic device or a group of connected electronic devices incorporating one or more loudspeakers or other electro mechanical transducers, and intended for the production, reproduction or amplification of sound, that projects noise beyond the lot line of the property from which the noise emanates and into any street or public place.

The issue at play here is also larger than the management of 415 Yonge Street using an illegal means to mitigate loitering on public property. It’s that they are doing so in such close proximity to a youth shelter (the parkette backs onto Covenant House Toronto), which, one could suspect, would be to drive away troubled youth who already have limited public outdoor space available to them.

In response to Daily Hive asking what prompted the building to put the noise devices up in the first place, this was Artis REIT’s response:

This area has a high proportion of transient occupants with no vested interest in the welfare of the community or neighbourhood. This has resulted in a fairly high crime rate including drug use, drug transactions, murder, and other violent crimes. In the absence of monitoring and enforcement, these crimes can and have taken place on any given day at any hour of the day or night.  Due to the configuration of the parkette, which only has one point of ingress/ egress, and the inability of the City to monitor and maintain the parkette, it was identified by the City and the Yonge St BIA as a high risk area for crime. Our own building has suffered vandalism and break & enter incidents through the years. Vagrancy, litter and illegal camping were only minor crimes by comparison. It had become a magnet for persons that local residents found intimidating and at times threatening to their personal security. These same persons also made the parkette undesirable for recreational use by our own tenants as well as residents and the general public. There have been several community meetings with the local City Councilor, Parks staff and police to discuss and try to resolve these issues. Among the suggested solutions is to convert it to a dog park. While we shared these same concerns with the local residents, we sought only to improve the security of our own premises first and foremost. We investigated a suggested method to discourage loitering on our premises that did not violate any by-laws or human rights and did not cause any personal or permanent injury.

However, in an email to Angelovich, Councillor Kristyn Wong-Tam of Ward 27 wrote the following:

The Councillor is extremely concerned about any attempts to discourage use of a public park.  Yours was the first email we received alerting us to the issue.  Your work in identifying the devices in use is very much appreciated.

We have contacted the Director of Parks, Forestry, and Recreation, as well as Parks Bylaw Enforcement, and Municipal Licensing and Standards to learn what can be done in this circumstance. We expect McGill parkette to be inspected with all due haste.

This is incredibly unfortunate, as the community had recently been working actively on plans to renovate and animate this parkette, to make it into a more welcoming space.  A landscape architect was engaged to present preliminary designs at a recent community meeting.  This particular parkette is leased to the City by 415 Yonge under terms that were set a number of decades ago.  These terms require that the owners of 415 Yonge consent to any renovation in the park before the City can proceed.  While 415 Yonge participated in the community meetings and discussions, they ultimately refused to allow any park improvements.

So, while 415 Yonge Street claims to want to make the public space of the parkette a better place, it seems they’re only willing to do so on their own terms. And if they are leasing the land to the city then it remains that the land is not theirs to police but rather a public space.

At least, of course, until that lease is up for renewal. Which may indeed be the entire point of all of this.