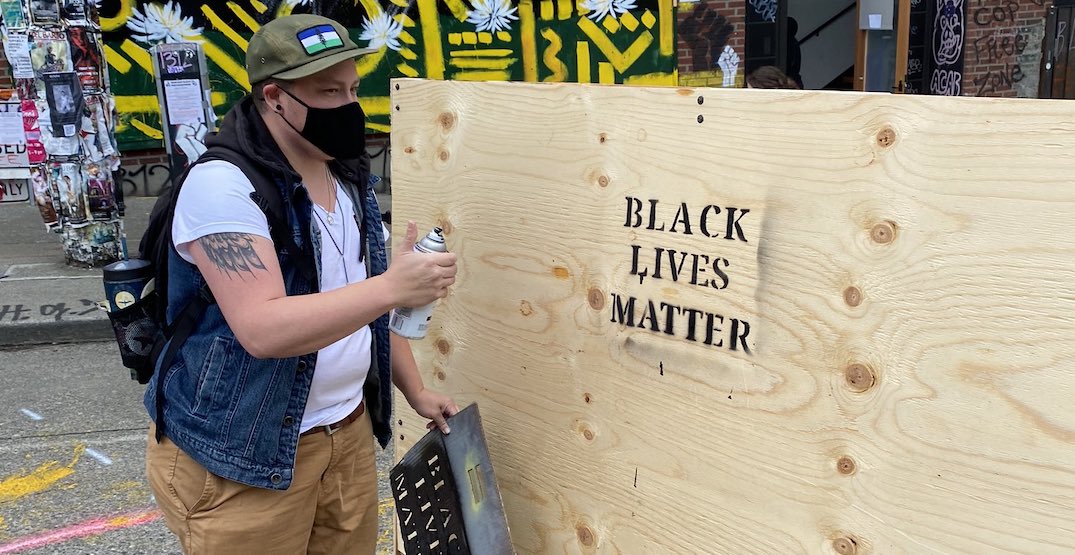 On June 14, the City of Seattle met with onsite organizers, small businesses, and residents in the Capitol Hill Organized Protest to discuss proposed changes to the protest zone.

The group reviewed ways in which they could increase public safety while ensuring the continuation of the protesters first amendment rights. The City, along with several protesters on site, implemented their first change on Tuesday — removing a tent barrier at 10th and Pine and replacing it with a sturdier concrete barrier.

#CHAZ / #CHOP – Good Morning. Looks like @seattledot is in the CHOP this morning building wooden structures to cover cement barriers for artists to use to paint on. Several other upgrades occurring as well. pic.twitter.com/c5GwzqFYC8

The concrete barriers have been placed “to allow for public safety and better access for the local community” by rerouting traffic, freeing up alley access, and opening streets.

The makeshift barriers are covered in plywood, which allows artists and protesters alike to expand the ever-growing collection of street art already in the protest zone. The City has also decided to keep the Black Lives Matter street mural safe by closing off Pine between 10th and 11th to traffic.

#CHOP -ing the #chaz in half so that “emergency vehicles” can get in and out. pic.twitter.com/TtVi5ehLHc

In order to open up 12th Avenue, the street has become a one-way road to accommodate room for a protest zone in the west lanes. An alley access zone was also set up on the Southside of Pine between 11th and 12th to allow for apartment building access.

According to the City, “the Seattle Police Department will dispatch to respond to significant life-safety issues in the area,” including an active shooter incident, an assault, a structure fire, a significant medical emergency, and other incidents that threaten a person’s life safety.