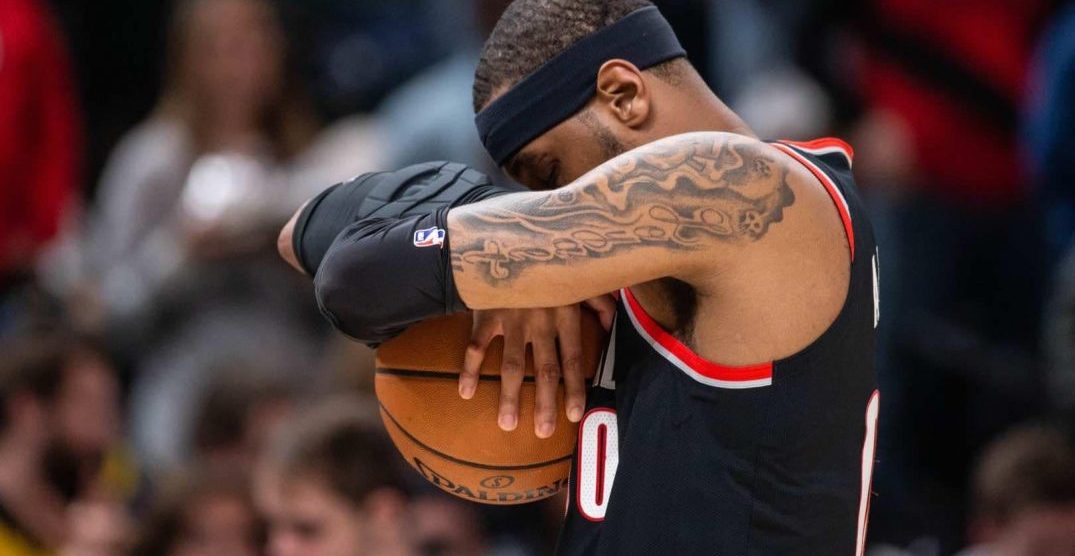 It’s been a rough return to the NBA regular season for the Portland Trail Blazers. Not only have they seen their all-star rapper sidelined by injury, but they just can’t seem to squeak out wins in close battles.

While the team is (and should be) in full desperation mode for points to make the playoffs, veteran NBA player Carmelo Anthony is as cool and collected as he can be. Perhaps it’s his experience in the league, or just his time spent in larger, crazier basketball markets, but he seems to be making the most of his chance to lead Rip City in Lillard’s absence.

Yesterday, on the road playing against the Indiana Pacers, one Portland fan got a moment of Melo’s time, and the humble 35-year-old 2003 first-round draft pick absolutely made his day.

Just look at the agape expression on this 00-fan’s face.

Melo may not have looked happy while doing it — the Trail Blazers were out of reach of the Pacers all night — but it has been obvious since he landed in PDX that the 10-time NBA All-Star is enjoying his relationship with the Rip City faithful, always quick to give some time.

In an Instagram video posted after the game, you can visibly see the fan’s hands shake as he is in near tears saying, “Oh my god, this is the best day of my life.”

The loss to the Pacers comes off the heels of Anthony’s first 30+ point game in two years, as the veteran is seeing far more time on the court with some injuries to Blazers down the stretch.

“I’m having fun. It’s a lot of fun. Just being able to go out there and play…being around the guys. Uplifting spirits when they down…be that guy that everybody can rely on for some positivity.” – @carmeloanthony pic.twitter.com/1XJ95YirsF

Up next for the Blazers as they continue their three-game road trip is the Atlanta Hawks on Saturday, February 29.

As for this Carmelo Anthony fan, it’s clear their year has been made, so while I’m sure he’d love for Portland to make a run into the playoffs, his season couldn’t get much better at this point.