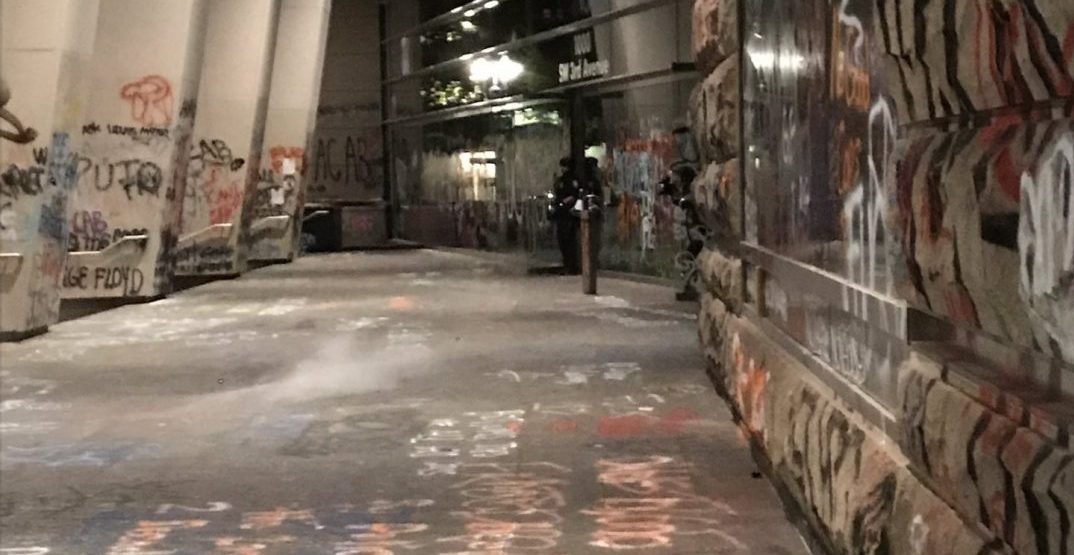 According to police reports, several arrests were made during Thursday night’s demonstrations and protests in Portland.

After hours of protests outside of the Justice Center and Federal Courthouse in Downtown Portland, the police bureau declared the acts a riot and began dispersing the crowd with force just prior to midnight.

A riot has been declared in the area of the Federal Courthouse and Justice Center. You must leave the area now by moving to the south and the west. CS gas and other crowd control munitions may be deployed. Leave the area now.

Back at the beginning of June, Governor Kate Brown declared that she would be calling in Oregon National Guard members in a “support capacity” and ensured the public that those militarized officers will not be used for crowd control.

According to those on the ground during Thursday night’s events, “federal police” came storming out of the doors at the Justice Center, guns at the ready, and began firing crowd control munitions at near point-blank range.

“Officers began dispersing the crowd in an effort to move them from the immediate area,” writes the Portland Police Bureau in a statement. “During this lawful action, the demonstrators were very hostile and violent towards officers.”

Following short-live dispersal, crowds returned to the Federal Courthouse and continued to throw “projectiles” at police guarding the building.

Though it was not mentioned in the reports filed by the police, video of the event posted on social media seems to show officers instigating any force or show of violence.

Federal police charge out the doors and tackle whomever they can, pepper spray some people and retreat. Somehow the front door was shattered #PortlandProtests pic.twitter.com/I8wpCQBrxS

The Portland Police Bureau states that near 1 am, small groups of protesters began leaving the area over the course of a few hours.

“No CS gas was used by Portland Police Bureau officers during this event,” reads the police report, though the PPB does not appear to be the only officers at the scene on Thursday.

Information regarding the arrests made during last night’s demonstrations have yet to be compiled and officially released. However, the police said not to “interfere with officers as they process custodies,” in a tweet early Friday morning. “If you interfere, you are subject to arrest and use of force, to include crowd control munitions.”