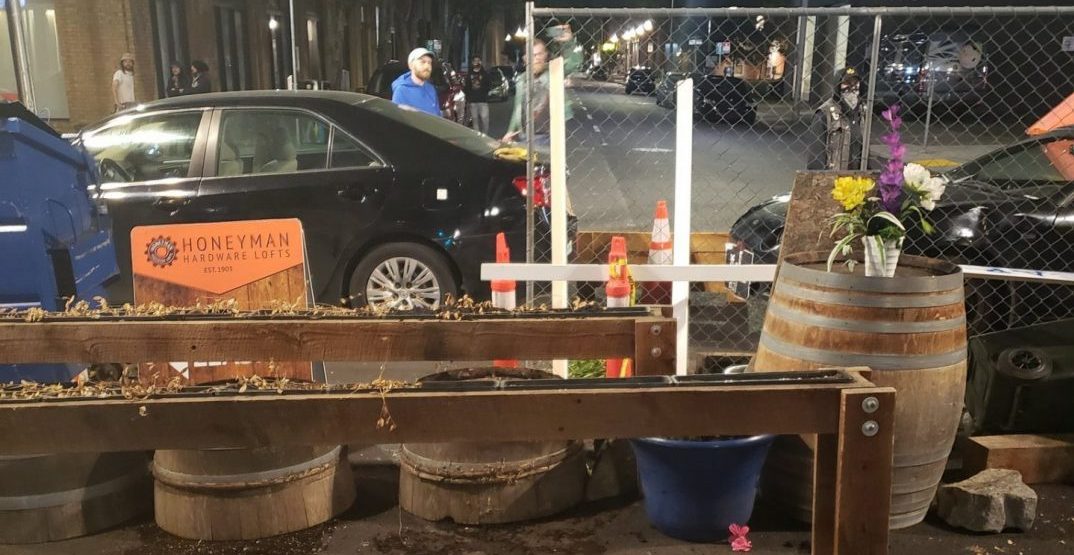 Portlandians continue to take to the streets in support of the Black Lives Matter movement following the police killing of George Floyd on May 25.

On Wednesday, the protests in Portland escalated to a point where some demonstrators created barricades in a small radius around Portland Mayor Ted Wheeler’s condo. Called the “Patrick Kimmons Autonomous Zone” — named after a Black man killed by Portland police in 2018 — the cobbled-together walls of the blocked-off streets lasted for a few hours in the early morning.

Police say that the group of protesters outside of Wheeler’s home “started gathering in the Pearl District, setting up several tents near the 900 block of Northwest Glisan Street.” By midnight, this group was joined by the group that was previously gathered outside of the Justice Center.

“At approximately 5:30 am, there were still an estimated fifty people in the area. An unlawful assembly was declared in the area of Northwest 11th Avenue east to NW Park Avenue and NW Irving Street south to NW Everett Street,” reads the police report. “At about 5:40 am, officers began clearing the area.”

PPB is declaring a civil disturbance and unlawful assembly from NW 11th east to NW Park Ave and NW Irving south to NW Everett St. If you do not live inside a dwelling in this area, leave immediately to the west. If you do not leave you are subject to arrest or use of force.

“One arrest was made and the rest of the people in the area dispersed … [the individual] was charged with Interfering with a Police Officer and booked into the Multnomah County Detention Center.”

A video uploaded on New 911 shows officers breaking down the barricades at the Patrick Kimmons Autonomous Zone in the early morning on Thursday.

“I am proud of our PPB officers and command staff who carefully and safely dispersed this unlawful assembly,” said Chief Chuck Lovell. “The actions taken by some to barricade City streets and begin the creation of an autonomous zone caused great concern for public safety.”

It has been over a week since Seattle protesters set up the Capitol Hill Autonomous Zone (CHAZ), which has recently begun dividing Equity protesters.

In Portland, police publicly asked residents to stay inside their homes after declaring a civil disturbance, as forces converged on the remaining members of the autonomous zone. “We are requesting Portland residents in this area stay inside their residence and shelter in place,” reads the tweet from Portland police.