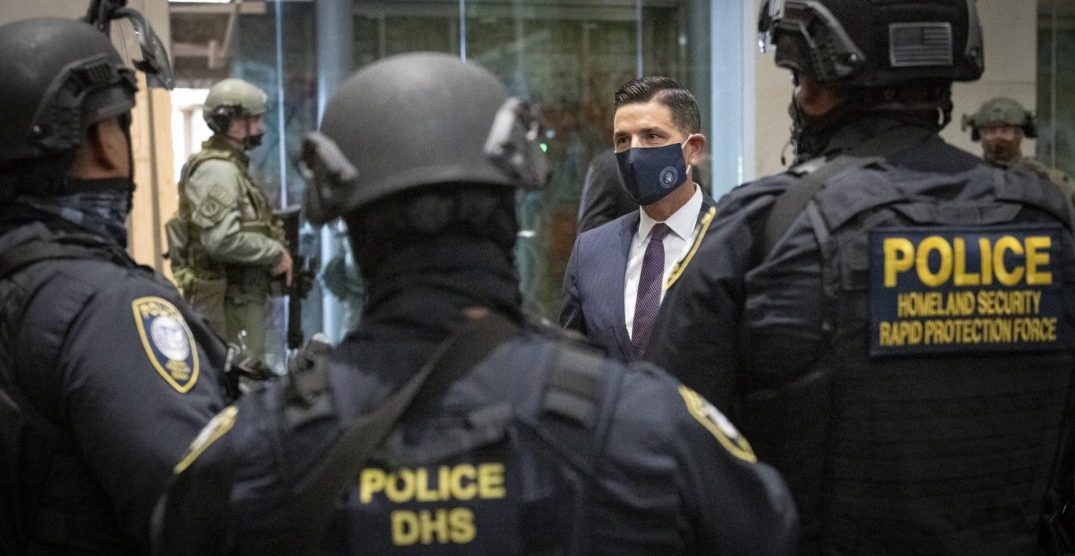 After this morning’s statement by Governor Kate Brown, Department of Homeland Security’s Chad Wolf published a statement that Oregon State Police will be replacing federal officer presence in Portland, soon.

Gov. Brown’s published update clearly states that, beginning tomorrow (July 30), federal officers will start to “go home.” However, some of the terminology in Wolf’s statement that followed contradict that exact timeframe.

“The Department will continue to maintain our current, augmented federal law enforcement personnel in Portland until we are assured that the Hatfield Federal Courthouse and other federal properties will no longer be attacked,” reads the statement from DHS Office of Public Affairs.

According to Wolf, Gov. Brown and himself have been in “regular communication” and the agreed-upon retreat from Portland hinges on the fact that Oregon State Police will have a “robust presence” in downtown Portland.

“Oregon State Police will coordinate with Federal Protective Service (FPS) officers to ensure all federal facilities remain protected and secure,” continues the update. “This plan is possible due to the valiant efforts of the DHS law enforcement officers protecting federal property in Portland from violent activity for the past two months.”

As for tomorrow’s planned departure, Wolf writes that “the Department will continue to re-evaluate our security posture in Portland, and should circumstances on the ground significantly improve due to the influx of state and local law enforcement, we anticipate the ability to change our force posture.”

.@POTUS made clear that this Administration is ready and willing to partner with state & local law enforcement to protect every American – and you see that commitment in Portland with this plan.

The presence of federal officers sparked growth in attendance by citizens of Portland to the protests held downtown every night, including the Mayor, and members of the City Commissioners Office. The force used by unmarked riot-gear clad federal officers has exacerbated the violence, prompting Mayor Wheeler to call President Trump’s actions “unconstitutional.”

According to DHS Acting Secretary Wolf, this plan agreed upon by Gov. Brown, will see the dissolution of armed federal officers in Portland once they believe their buildings are protected. Oregon State Police, who have had a minimal presence and order to combat protesters in Portland in the 60-days since the demonstrations began, will be called in.