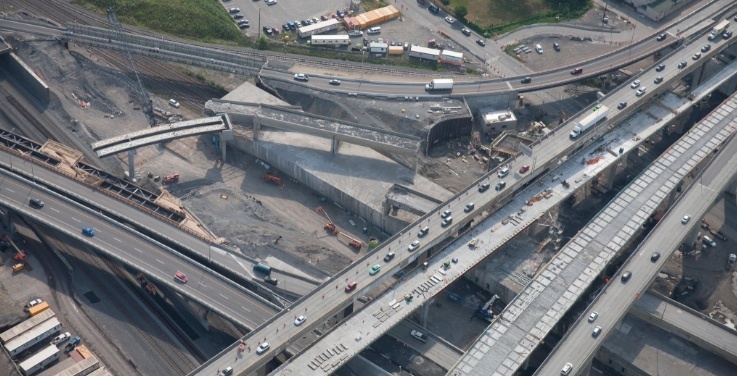 Brace yourselves, Montreal drivers. The Turcot Interchange will completely close tonight in what Transports Québec is calling the most complex demolition of the project so far.

Over a five-day period from November 9 to 13, the heart of the interchange will be closed due to the dismantling of the old Highway 15. The only part of the Turcot that will remain open is the Highway 15 south.

At 25 metres tall, it’s one the highway’s tallest structures to come down. The tricky deconstruction must be maneuvered around the new railway and the new Highway 20 west and east lanes.

The transport ministry calls the work “unprecedented” and says, “everyone’s cooperation, from road users and employers, is needed.” 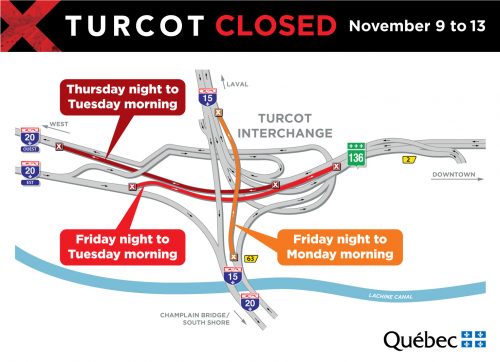 Officials from KPH Turcot claim it could very well be the worst driving situation since the Turcot work began.

Traffic manager Sylvie Gervais says “it’s the biggest closure we’ll have. It’s really major. It’s a closure that never has been done in Montreal, so it’s a first and hopefully the last.”

Essentially, it means drivers won’t be able to use the Turcot to drive into town or leave the city and drivers should avoid the area in entirely for four days.

Transport Quebec is warning drivers to expect major delays as traffic will be rerouted either to the Bonaventure or the Metropolitan Expressway.

Officials suggest planning routes ahead, using public transit and leaving with plenty of time to spare.

Adverse traffic conditions are to be expected on the freeway network over this period mainly on Friday 9 and Monday 12. Choose public transit and prioritize the métro to avoid traffic! ⏩ https://t.co/l8Oe1yhs0b https://t.co/6QEtz2Vv7k

The majority of the 50-year-old interchange is expected to be finished within six months after the November weekend and major driving disruptions are expected to subside by the end of spring.

The $3.6-billion interchange, the largest construction project in the province, is 60% completed and is still on course to be finished by the end of 2020.

We’d recommend avoiding the Turcot entirely, if possible. It’s a good time to catch up on raking leaves or your favourite Netflix show.