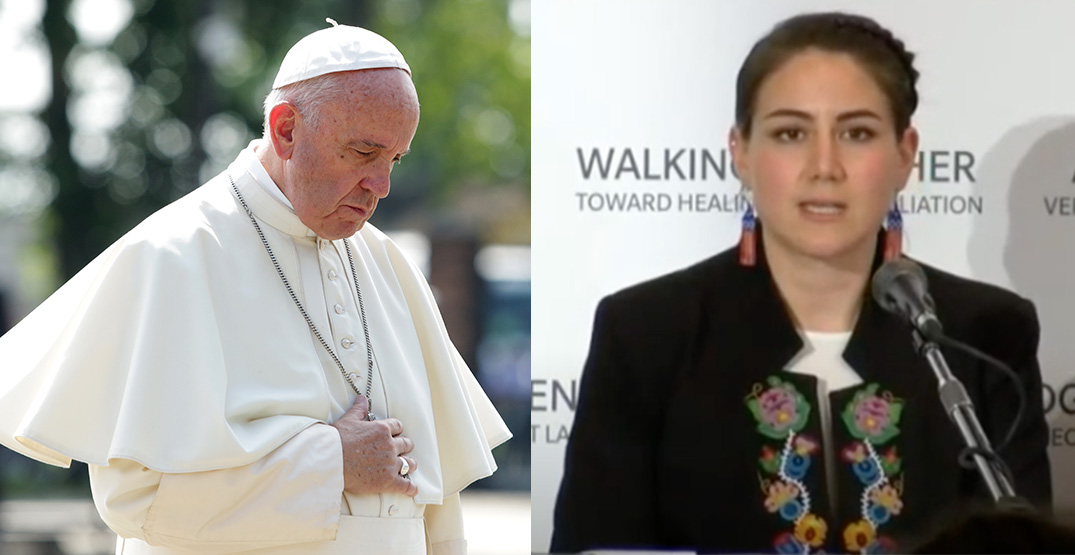 Pope Francis met with Métis residential school survivors in Rome on Monday but has yet to issue an apology for the abuses that took place in the church-run, government-funded institutions.

Eight official delegates from the Métis National Council, composed of survivors, elders, youth and community members, shared their stories with the Pope and listed their demands for a path toward reconciliation.

“We had three really incredibly brave and resilient survivors who came with us, and they shared their truths with Pope Francis,” said Cassidy Caron, Métis National Council president, during a press conference. “We as a Métis nation have extended an invitation to Pope Francis to join us on our path for truth, healing, justice, and reconciliation.”

These “schools,” which existed from the 1870s to 1997, were run by the Roman Catholic Church and funded by the Canadian government.

“Those residential schools were set up to remove us from the land so that Canada could claim everything,” said Mitch Case, member of the provisional council of the Métis Nation of Ontario, during the press conference. “Here we are, a century-and-a-half later, with still no process for our survivors to tell their story, no process for anyone to say sorry.”

The delegation made clear what survivors need from the Catholic Church and the Canadian government.

“What a lot of our survivors have told me is that they’re looking for that acknowledgement that the Catholic Church and residential schools played a role in the wrongdoing that was done to these children and to our communities,” said Caron.

She stressed that they don’t just want an apology but for those words to be followed by actions aligning with truth, reconciliation, justice and healing.

Under truth, Caron says they want “unfettered access” to church and residential school records so that they can piece together a clearer history of where children were taken from their families and which of those children didn’t return home.

The delegation also demanded access to Indigenous cultural artifacts that are held at the Vatican.

“Those artifacts tell a story about our communities. Those are our history,” said Caron.

Under justice, the delegation asked for a commitment from the Catholic Church not to shield alleged perpetrators who are still alive.

For healing, Caron says they want to see substantive and direct compensation for residential school survivors.

“This has contributed to the systemic inequities that our people face today. Those of our families who don’t have a house or a roof over their head,” she said. “We need funding for community-based healing initiatives as directed by our survivors and our families.”

There was no comment from Pope Francis after the meetings.

In a news release from the Vatican, Caron said, “Pope Francis sat, and he listened, and he nodded along,” during the meeting and that the only words he spoke back to them in English were truth, justice and healing.