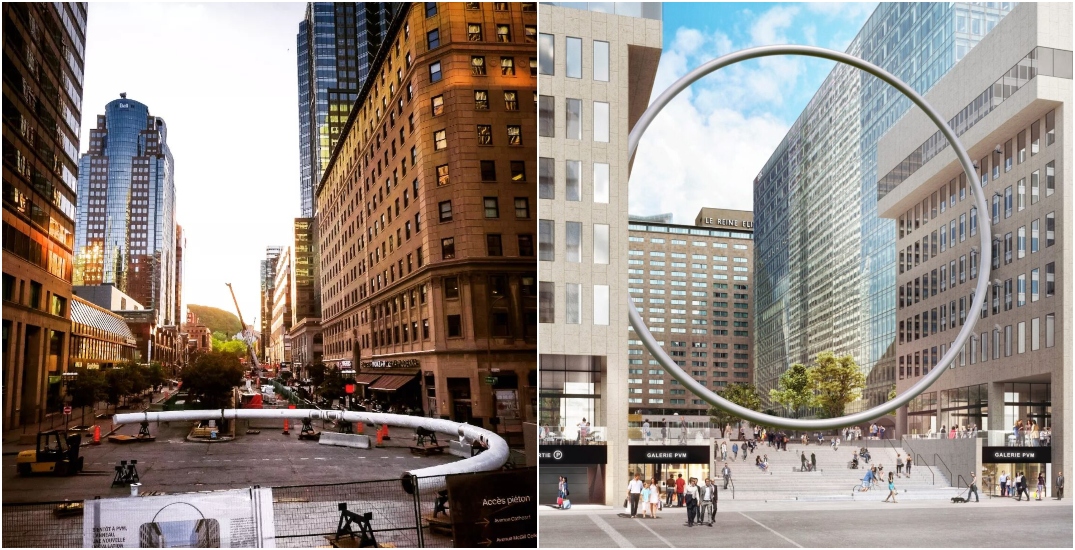 Make all The Lord of the Rings and/or Stargate portal jokes you want, but Montreal’s ring installation is coming full circle.

The highly-criticized art piece is a 90-foot-high, 50,000-pound stainless steel arched ring. Aptly named “The Ring,” the massive structure reportedly cost $5 million and is set to be unveiled at the main entrance to Esplanade PVM at Place Ville Marie today.

While speaking with Daily Hive, Éric Senécal, the Public Affairs Advisor for Ivanhoé Cambridge says the art piece presents a two-year-long collaboration between the City of Montreal and local multidisciplinary teams.

Senécal says “The Ring” was manufactured by a Trois-Rivières-based firm, using “international expertise in high-precision machining, manufacturing, and mechanical assembly.”

The Ring will have a 31.5-inch-thick curved tube and is the crown jewel of the PVM’s $200 million investment it made in 2017 to improve the area’s “energy efficiency” and the revitalization of its Esplanade.

Senécal says materials for the art piece have been delivered on-site and is currently being assembled on the ground. He says the unveiling will take place on June 16 with the ring on the ground and it will be suspended for all to see “a few days later.”

Perhaps Frodo Baggins said it best in The Lord of the Rings: The Fellowship of the Ring: “I wish the Ring had never come to me. I wish none of this had happened.”

Construction of the Ring is currently complete and needs just to be hoisted into the air. The Ring will be unveiled today at the West Lobby of 1 Place Ville Marie at 3 pm.