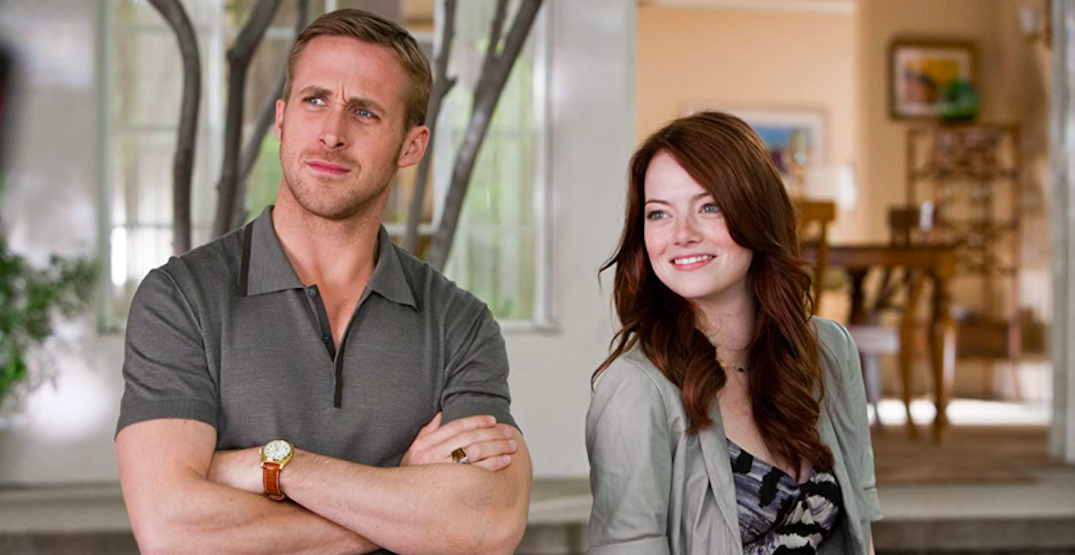 Admit it, you love a good sappy romantic comedy. Which is perfect because Netflix Canada has an impressive library of movies that have equal parts love and laughter.

From some charming 1990s classics to rom-coms released this year, and everything in between, the streaming platform has no shortage of the popular film genre.

So grab the tissues AND get ready to laugh, here are some rom-coms that you and your significant other should cuddle up to and check out.

Ryan Gosling, Emma Stone, and Steve Carrell headline an all-star cast? What more could you want?

Blindsided by the end of his marriage and hopeless dating, Cal (Carrell) receives a helping hand from a smooth-talking player who’s about to meet his match.

After a filmmaker and his girlfriend return home from his movie premiere, smouldering tensions and painful revelations push them towards a romantic reckoning.

When her secret love letters somehow get mailed to each of her five crushes, Lara Jean finds her quiet high school existence turned upside down.

After hitting her head, an architect who hates romantic comedies wakes up to find her unremarkable life has become a dazzling, cliché-driven rom-com.

This clever tale of Bridget Jones’s odyssey from Mr. Right-here-right-now to Mr. Right delivers a glimpse into the inner workings of the female mind.

Another classic rom-com from 2001, join Jennifer Lopez and Matthew McConaughey as the wedding planner (Lopez) is saved from an accident by the man of her dreams — only to discover that he happens to be her latest client’s fiancé.

After falling for a pretty art teacher who has no short-term memory, a marine veterinarian has to win her over again every single day.

After a stint in a mental hospital, Pat moves in with his parents and tries to win back his wife, until he meets a woman who is as unstable as he is.

Jock and class president Zack accepts his friends’ wager to make over geeky, bespectacled Laney into a prom queen beauty — with unexpected results.

Meddlesome Beverly Hills high school student Cher gets more than she bargained for when she gives a fashion-challenged student a makeover.

Academy Award-nominated filmmaker Noah Baumbach directs this incisive and compassionate look at a marriage coming apart and a family staying together.

Reunited after 15 years, famous chef Sasha and hometown musician Marcus feel the old sparks of attraction but struggle to adapt to each other’s worlds.

On the heels of a blindsiding breakup, music journalist Jenny braces for a new beginning –and one last adventure with her closest friends.

To win back her Harvard-bound former beau, Valley girl Elle Woods enrolls at the university’s law school — and ends up excelling in the legal arts.

A player bets his co-workers he can make a woman fall in love with him in just 10 days. But she bets on the wrong girl — a writer with her own agenda.

Love-hungry Baltimoreans deal with the pitfalls of human interaction in this big-screen adaptation of Greg Behrendt’s best-selling book, including an all-star cast.

Years after high school, a once-portly nice guy comes home for the holidays and reunites with a former crush he still has feelings for.

Burned by a bad breakup, a struggling New York City playwright makes an unlikely connection with a divorced app designer she meets on a blind date.

After graduating, four college roomies, petrified by the prospect of facing “real life,” reluctantly step into adulthood in this ensemble comedy.

Single professional Amy fears commitment until she meets the perfect guy. But the harder she falls, the hotter the mess.

“Friends with benefits” Emma and Adam are fine with their open relationship…until those pesky little things called feelings enter the picture.