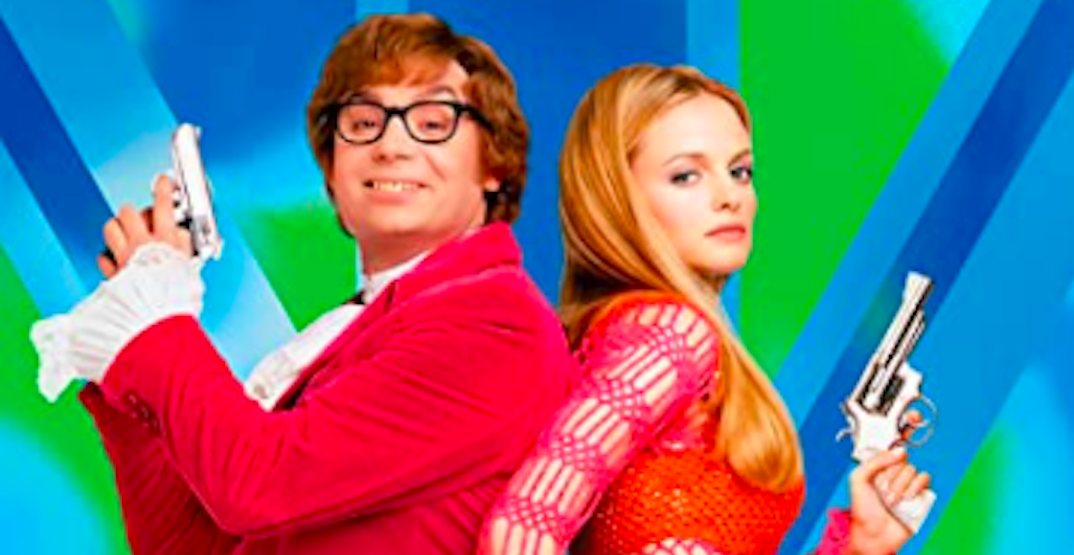 Things have been pretty dark, stressful, and quite angering at times over the past 11 months. If you need a little pick-me-up, Netflix Canada might have just the cure.

The streaming platform has amassed an impressive library of comedies over the past years, and we’ve put them all together so you don’t have to spend countless hours scrolling through what feels like an infinite amount of content.

We’re highlighting a few new comedies on the platform as of February 19 along with some can’t-miss classics.

From Austin Powers to Monty Python, and the history of swear words, here are 16 chuckle-worthy movies to soak up Netflix. And we’re sticking to feature films here (and maybe a documentary or two); we’ll save stand-up specials for another time (or the next worldwide pandemic).

Join Nicolas Cage for an education in expletives. This six-part comedy series explores the origins, pop culture-usage, science, and cultural impact of curse words. Because we all know we’ve been using plenty of these over the course of the pandemic.

After being in power for nearly thirty years, Soviet dictator Joseph Vissarionovich Stalin (Adrian McLoughlin) takes ill and quickly dies. Now the members of the Council of Ministers scramble for power in this hilarious historically inaccurate satire.

A clean-cut high school student relies on the school’s rumour mill to advance her social and financial standing.

It’s quick and funny — what else do you need?

And while we’re on the subject of Andy Samberg, you really can’t miss out on Hot Rod if you’re in need of a good chuckle. It’s that perfect type of dumb funny that is just so timeless.

We can’t mention 2007 comedies without highlighting Superbad. It holds up remarkably well after 14 years and will still have you hurtling over laughing. Promise.

Will Ferrell and Mark Wahlberg buddy up for this not-so-buddy cop comedy as two lowly desk jockeys who finally catch their big break in the police world, set in New York City.

If you’re really in the mood to tumble onto the floor laughing, the late great Canadian Leslie Nielsen plays hapless detective Frank Drebin, who causes more problems than he solves as he tries to save Queen Elizabeth II.

If you’ve ever worked in the service industry, Waiting… might sum up all your experiences as young employees at Shenaniganz restaurant collectively stave off boredom and adulthood with their antics.

Before director Todd Phillips wowed the world with Joker, he assembled an early-2000s all-star squad together with Old School, featuring Luke Wilson, Vince Vaughn, Will Ferrell, Ellen Pompeo, and Jeremy Piven as three friends who try to recapture their glory days by opening up a fraternity near their alma mater.

Arguably one of the funniest spoof movies ever made, Scary Movie is anything but a horror flick. It satirizes the genre from the late ’90s and still holds up remarkably well after being released more than two decades ago.

A one-night stand results in an unexpected pregnancy for Alison (Katherine Heigl) who tries to make it work with slacker stoner (Seth Rogen, who else?).

YouTube-turned-comedian Bo Burnham directs this coming-of-age comedy about an introverted teenage girl who tries to survive the last week of her disastrous eighth grade year before leaving to start high school.

Having thought that monogamy was never possible, a commitment-phobic career woman (Amy Schumer) may have to face her fears when she meets a good guy.

Audrey and Morgan are best friends who unwittingly become entangled in an international conspiracy when one of the women discovers the boyfriend who dumped her was actually a spy.

The Coen Brothers tackle comedy in this ballad that features six tales of life and violence in the Old West, following a singing gunslinger, a bank robber, a traveling impresario, an elderly prospector, a wagon train, and a perverse pair of bounty hunters.

From writer/director Guy Ritchie, The Gentlemen channels earlier Snatch vibes and follows an American expat who tries to sell off his highly profitable marijuana empire in London, triggering plots, schemes, bribery and blackmail in an attempt to steal his domain out from under him.

If you’re missing celebrities these days, Between Two Ferns: The Movie is loaded with them.

Three friends conspire to murder their awful bosses when they realize they are standing in the way of their happiness.

In arguably one of the funniest movies ever, the Monty Python crew channel King Arthur and his Knights of the Round Table as they embark on a surreal, low-budget search for the Holy Grail while encountering various very, very silly obstacles.