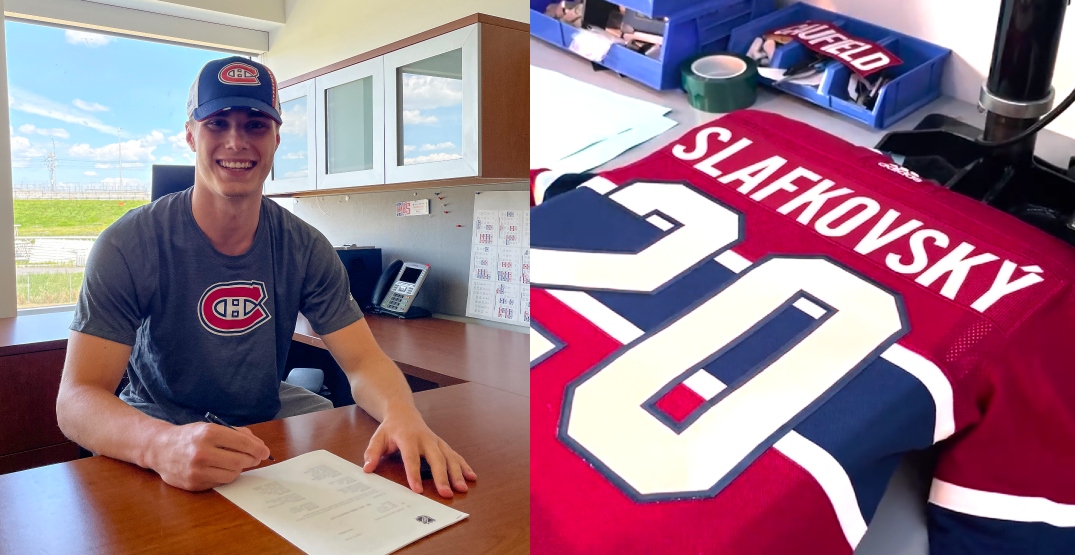 Being the new guy is seldom easy. Ask anyone. But, in the case of Juraj Slafkovsky, things are already beginning to fall into place.

Shortly after signing his entry-level contract with his new club, it was announced that the 18-year-old Slovakian forward — who was selected first overall by the Montreal Canadiens at last month’s NHL Entry Draft — would wear the number 20 with the Habs. Many observant Montreal fans were quick to point out that the number was already taken by defenceman Chris Wideman.

According to a Tuesday team press release, Wideman immediately contacted the Habs’ head equipment manager, Patrick Langlois, to help transfer his number when he learned Salfkovsky was attached to the No. 20 he wears with the Slovakian national team.

Slovakian journalist Tomáš Prokop asked the young forward about Wideman’s gesture. Slafkovsky was quick to show his gratitude and mentioned that a complimentary dinner along with a signed jersey for Wideman’s son would soon follow.

Few quotes of Juraj Slafkovsky (for @DennikSport). About number 20 – Im so thankful to Chris Wideman. We made a deal, that I will give his son signed jersey. I will definitely invite Chris to the dinner, too. 1/5 #GoHabsGo pic.twitter.com/TEFPXmNXd2

Getting his desired number has the prospect all the more excited for his return to Montreal this August. “Montreal feels like a second home, and for sure it will be,” said Slafkovsky. “I’m looking forward to wearing the jersey. I’m thinking about that every day. I just can’t wait until I’m there and things are happening.”

As for Wideman, who will now wear former captain Shea Weber’s number 6, he says “first and foremost, we’re trying to create an environment and a culture where he feels welcome with the team.

“He’s a young guy, and I wanted to make sure that he knows that we’re excited to have him and we’re going to make it a place where he can reach his potential and become a really good player in this league.”

Wideman is also perfectly happy with the return on his number exchange. “For me at the end of the day, all I asked is that he would sign a Canadiens jersey for my son so that he has it as a piece of memorabilia,”says the 32-year-old St. Louis native. “I wanted to make him feel comfortable and a jersey will be more than enough.”