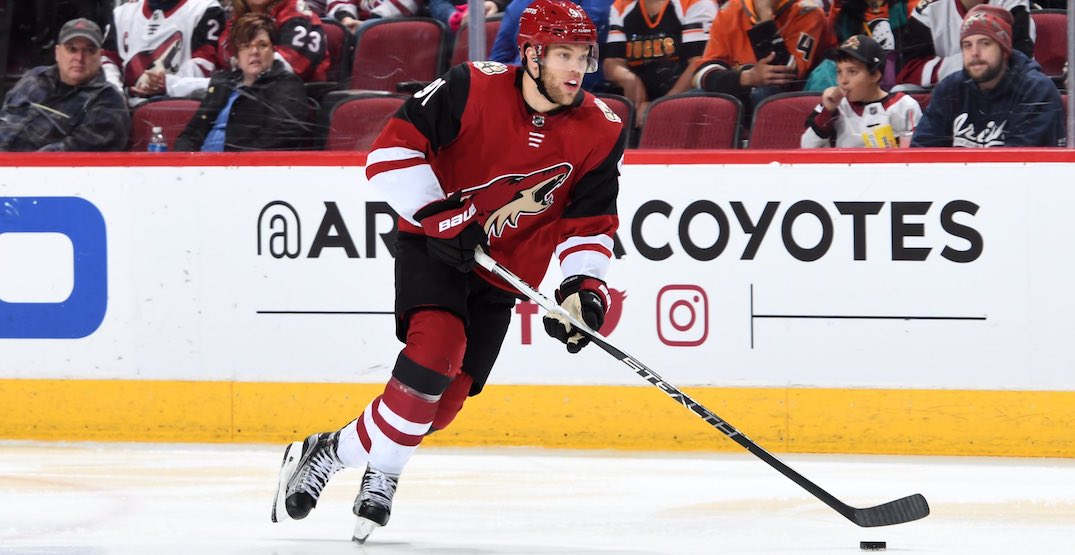 It’s October, which means the new NHL season is about to begin.

Uh, check that. The draft and free agency are about to begin.

For the Montreal Canadiens, GM Marc Bergevin has already taken care of a couple of big priorities. First, he finally added a capable backup goalie to Carey Price by trading for Jake Allen. He’s already taken care of his business on the blue line too by trading for the rights to Joel Edmundson and subsequently signing him to a four-year contract, and then signing Jeff Petry to a four-year extension.

As any Habs fan who watched their playoff series against the Philadelphia Flyers will tell you, though, this team needs to find a way score more goals. Adding a top-six winger seems to clearly be the big remaining thing for Bergevin to check off his offseason to-do list.

Let’s take a look at seven players the Canadiens might be interested in signing when free agency opens on Friday.

As usual, Bergevin is signalling to Habs fans that he isn’t really looking to make a huge splash in free agency.

He did make an offer to Matt Duchene last year and signed Sebastian Aho to an offer sheet though, and Montreal’s need for a scoring winger certainly still exists. So let’s not completely rule out the possibility of Bergevin dipping his toe into the deep end of the free agent pool.

Taylor Hall is certainly one of the biggest names out there this year. The former first-overall pick only turns 29 in November and is just two years removed from winning the Hart.

He has been a bit injury-prone in recent years, though, which is a bit of a concern for a guy who will undoubtedly be seeking a long and lucrative contract.

He may not be as big of a name as Hall, but Mike Hoffman has been a reliable source of offence for a while now. He’s scored 26 or more goals in five of his six full NHL seasons, including a career-high 36 with the Florida Panthers in the 2018-19 season.

He’s also more durable, having averaged 77 games played per season over the last six years. Hoffman is a couple years older than Hall, though, turning 31 in November, so the term he’s looking for is going to be important here.

Still, he would undoubtedly be a big addition to Montreal’s offence.

After a 31-goal season as a 23-year-old with the Los Angeles Kings in 2015-16, Tyler Toffoli had been regressing on a declining team that couldn’t score the last few years.

He looked reborn after a trade to the Vancouver Canucks, though, scoring 10 points (6-4-10) in 10 regular season games, then coming back from injury to score four (2-2-4) in Vancouver’s seven-game defeat to the Vegas Golden Knights.

Toffoli is still just 28, and he’s probably going to be less expensive to sign than Hall or Hoffman. This is definitely a player who could be on Montreal’s radar.

Very quietly, Evgenii Dadonov just had three very productive offensive seasons for the Panthers after returning from the KHL.

He’s 31 and doesn’t have that long of an NHL track record, so it’s hard to gauge what kind of contract he could be in the market for. Perhaps something along the lines of the five-year, $31.25-million contract Alexander Radulov signed with the Dallas Stars at 31 years of age in 2017. The Habs reportedly offered Radulov the same contract to stay. Would they be willing to offer that kind of contract to Dadonov now?

Long-time Nashville Predators forward Craig Smith will be looking for a new team this offseason.

He’s not a star — his career highs are 25 goals and 52 points — but he’s been giving solid middle-six forward production for a long time now. He topped 20 goals in five of the last seven seasons and was on pace to do so this year if a full season was played.

He’s not going to break the bank, he’s only 31, and he’s probably got at least a couple more 20-goal seasons in him.

He may not be the most exciting addition, but that doesn’t mean he wouldn’t be a helpful one.

Kovalchuk’s resurgence with the Canadiens after being dumped by the Kings was the talk of the league for a bit. He cooled off a bit after his hot start, but he was still able to fetch a third-round pick from the Washington Capitals. He scored four points (1-3-4) in seven regular season games in a third-line role for the Capitals prior to the shutdown.

Along with the rest of the Caps, though, had a very disappointing performance in the Toronto bubble after the restart, recording just one assist in eight games.

Including the playoffs and dating back to his time in Montreal, Kovalchuk finished the season with just one goal in his final 22 games.

After he was traded it was an open secret that the Habs and Kovalchuk had mutual interest in a reunion after the season, but, well, a lot of things have changed since February. Did Kovalchuk’s underwhelming performance with the Capitals give the Canadiens second thoughts about bringing him back?

Perhaps they should just appreciate the improbably fun ride they had with Kovalchuk, realize they’re unlikely to catch lightning in a bottle twice, and move on from the 37-year-old. Still, he seemed to endear himself to just about everyone in the Canadiens organization, and it wouldn’t be shocking to see him brought back on a cheap one-year deal.

In 2009 the Canadiens and long-time captain Saku Koivu parted ways. After playing the first 13 seasons of his career in Montreal, he signed with the Anaheim Ducks and gave them five solid years before calling it a career.

In 2020 the Minnesota Wild and long-time captain Mikko Koivu are parting ways. After playing the first 15 seasons of his career in Minnesota, would he be interested in coming to his brother’s old team to finish off his career?

Would the Habs signing the younger brother of a beloved former captain be a nice story? Of course.

Would it make sense from a hockey perspective, though?

His offensive production cratered this past season, though, which surely played a factor in the Wild’s decision to move on from the 37-year-old who’s been part of the organization for almost its entire existence.

In other words, Mikko’s not going to help Montreal’s offence much, and I don’t expect Bergevin to sign him purely for sentimental reasons.

If he wants to play in Montreal and is willing to sign a cheap one-year deal to be the fourth-line centre, though? Sure, sign him up.