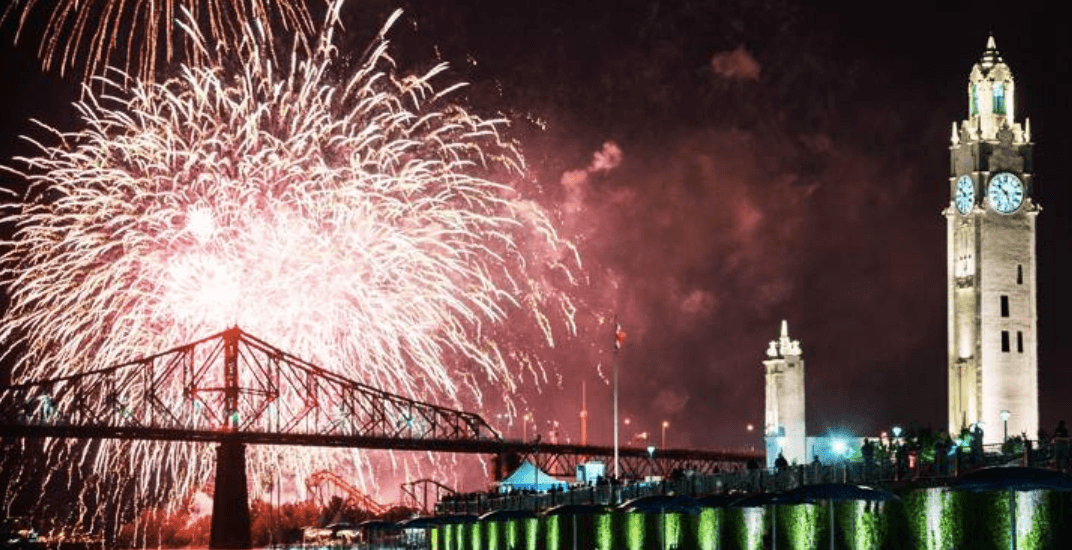 It’s the most wonderful time of the year! It’s officially the start of the holiday season so get in the spirit with these 46 events happening in Montreal this December.

Defile des Reves 2017 is the 13th edition of the annual holiday event presented by Caisse Desjardins du Cœur-de-l’Île. Visitors will be swept up by the magic of Christmas as the parade will feature floats, marching bands, dance groups, firetrucks, costumed characters, and of course, Santa Claus himself.

Where: Rue St-Hubert, starting at the corner of Bellechasse and ending at Jean Talon.
When: December 1, 2017
Time: Festivities begin at 7 pm.

From December 1 to 24, Le Grand Marche de Noel will be taking over Place des Arts. This German-style Christmas market will feature food trucks, a Santa’s Cabin, Elves Workshop, and Santa’s Sleigh. There will also be carol singers, karaoke, storytime, and so many more events happening for the holiday season.

This Montreal holiday market is the perfect place to find the best boujee gifts for the most stylish person on your list. The [email protected] holiday market is where you’ll be able to get your hands on amazing products from Montreal’s hottest designers and artists.

Where: Various pop-up locations, check Facebook page for this year’s details!
When: December 1 to 31, 2017

A tribute concert to your favourite 90s girl band.

This could be the cutest event happening in Montreal. This is a monthly event taking place Le Doggy Café. It’s meant to bring together puppies and their owners to for a very cute play date. Bring your puppy and prepare for cuteness overload.

The American band brings their legendary sounds to Laval.

This year, Cineplex will be screening some of the best Christmas classics on the big screen. This year’s selections include: Miracle On 34th Street, Elf, Polar Express 3D, Bolshoi Ballet: The Nutcracker, Love Actually, Die Hard and It’s A Wonderful Life.

Santa’s favourite reindeer will be making an appearance in Montreal this December. On December 3, from 12 to 2:30 pm, head down to Longueuil Public Market to meet the one and only Rudolph.

Emily Haines is back with Choir of the Mind, the Metric singer’s first release as her Soft Skeleton solo project in a decade.

Insects to our rescue! Panel + tasting

Can eating insects be good for us and our environment? Find out at this tasting panel.

Longtime Scottish post-rock group (which was formed back in 1995 in Glasgow), will fill Theatre Corona with their energetic and pseudo-psychedelic sounds.

The Legend of Zelda Symphony in Montreal

Get ready for an orchestral adventure. The concert’s five-movement symphony will charm audiences with Nintendo composer Koji Kondo’s original music. The music brings moments of Link conquering dungeons and running through forests to life.

American indie rock band The National – who have been known for their dark and somber (yet danceable) sounds – hits MTelus on December 8 for a performance that will give you anything but the warm and fuzzy holiday feels.

If you’re looking for some fashionable holiday finds you’ve got to check out Montreal’s Designer Holiday Market.

Mark this on your calendars! An enchanting Christmas village is coming to Montreal this December. Village de Noël de Montréal will feature holiday vendors, delicious treats, sparkling Christmas trees, lights, Santa Claus and so much more!

Where: Place du Marche, corner of St-Ambroise and Atwater
When: December 7 to December 10, and December 15  to December 17
Time: TBA. Check website for hours.

If your Christmas event to-do list isn’t already full of activities, you may want to add this one to your list. A magical Christmas village is taking place just 30 minutes away from Montreal.

If you’re willing to take a one hour and 30-minute drive to Trois-Rivières, you can do exactly that. Noël en Lumière runs from December 8 to January 7 and offers thousands of visitors a festive experience during the holiday season.

On December 9, Avenue du Mont-Royal will light up for the 2017 Torchlight Christmas Parade.This holiday extravaganza will feature the characters of Yan Imbault animations who will take to the streets alongside choirs, stilt walkers, entertainment, and festive parade-goers.

Where: Parade kicks off at Parc des Compagnons (at the corner of Mont-Royal/ Cartier)
When: December 9, 2017
Time: Events kick off at 7 pm. See full schedule of events on website.
Price: Free! Non-perishable food donations are welcome.

It’s never too early to start making that holiday gift list and you’ll be able to pick up some great finds at the  Marche Artisanal Montreal.This Christmas market will feature amazing holiday gifts crafted by local artisans. This year, the market will be held at La Casa D’Italia next to metro Jean-Talon.

When: December 9 to 17, 2017
Where: La Casa D’Italia, 505 Jean-Talon Est, Montreal
Tickets: More information to be released closer to the event. Check website for details.

The ultimate holiday shopping market will be taking over Palais du Congres from November 30 until December 10. The market started in 2010 in support of The Nutcracker Fund for Children, the country’s first charity Christmas market symbolizes the kick-off for the holiday celebrations.

Where: Palais du Congres
When: Until December 10, 2017
Admission: Free

Montreal’s Museum of Contemporary Art will host a series of five concerts based on five iconic Leonard Cohen albums to honour the legendary artist. The concerts will take place during the five months of the museums “A Crack in Everything”exhibition, which is dedicated to Leonard Cohen and his artistry.

In addition to the upcoming Nutcracker Market, you can also get your Nutcracker fill courtesy of the Les Grands Ballets. The full-length rendition of The Nutcracker is coming to Place des Arts from December 14 until December 30

Everyone’s favourite online craft site, Etsy, is hosting a massive holiday market in Montreal this December. For two days only, the market will be taking over the Denise-Pelletier Theatre.

Celebrate Chanukah through song! The Segal Centre is hosting a Chanukah sing-along to celebrate the holiday this year. The event, titled Lyrics & Latkes, will feature songs in Yiddish, Hebrew, and English, with English translations.

Ring in Christmas with the beautiful sounds of the choir at Notre-Dame Basilica.

Here’s another Christmas market to add to your list. Until December 24, this charming alleyway in Old Montreal will turn into an adorable holiday market hosted by The Pepin Shop.

An ‘Ugly Christmas Tree Village’ is officially coming to Montreal this holiday season. Until December 23, head down to Prince-Arthur Street East for the city’s first edition of the Village du Vilain Sapin de Montréal. This is definitely not your average Christmas festival. Prince-Arthur Street East will light up with festivities including entertainment, music, and decorations.

From garlands and wreaths to ornaments and miniature villages, the most important piece of Christmas decor is undoubtedly the Christmas tree. Find the perfect tree at any one of the locations in this list. Whether you want a rustic outdoorsy experience or something quick and painless, these 10 spots have got you covered.

Where: Look up locations in this handy list
When: Throughout December

Strap on those skates and get out on the ice! Whether you love a fast-paced game of pond hockey, or you’re more of an elegant figure skater, there is an outdoor rink for you in Montreal.

From the classics like Beaver Lake and Bonsecours Basin to the family-friend Parc Pratt, skating is a must if you’re in Montreal this winter.

Where: Check out this list of rinks
When: Throughout December

December is the month to have a one-on-one chat with Santa Claus himself. Whether you want to take a goofy Christmas picture with your friends, or your kids are dying to see the big man in red for themselves, there are plenty of spots to meet Santa in Montreal. From Carrefour Laval to Place Emilie Gamelin, there are lots of places to see the jolly man in red!
When: Anytime
Where: Various locations

Cozy up with hot chocolate

Is there anything more romantic than sipping hot cocoa by the fireplace? We think not. While hot chocolate may be available all year round, there is nothing as satisfying as a warm cup of hot chocolate in the heart of winter. If you’re in need of a hot chocolate fix as the winter approaches, be sure to head to Au Festin de Babette, Cafe Myriade, Juliette et Chocolat, Cacao 70, Cafe Replika, or Cafe Code Noir (we highly recommend their delicious hot chocolate beverages).
When: Anytime
Where: Various locations

Take your date on an enchanting snowshoeing tour through the trees of the Morgan Arboretum. The 5 km trail starts from behind the Arboretum’s Pine Cottage and takes you all around the centre’s grounds. Prepare for a day of snow-filled fun. Snowshoe rentals cost $7. Alternatively, if you’d love to snowshoe closer to the downtown core, snowshoeing is possible on Mount Royal and snowshoes can be rented from the Beaver Lake Pavilion.

Slide down the snow atop Mount Royal or take a skate on Beaver Lake! The perfect winter activities for the whole family.

Where: Beaver Lake, Mount Royal
When: Starting in December

This new cherry blossom Japanese restaurant and bar could be the prettiest place to eat in Montreal. Le Blossom is the latest establishment led by Montreal restauranter Dan Pham and his partners. The eatery is located in Montreal’s “The Village” neighbourhood and specializes in traditional Japanese handrolls, private-imported sake, contemporary Japanese dishes, and more.

Volunteer for the holidays

Do a little good this Christmas by volunteering to spend your time at one of the city’s many holiday charities. Whether you’re into running a toy drive, sorting donations, or serving food at a soup kitchen, there are plenty of opportunities to get involved right here in Montreal. On Rock Community Services, West Island Mission, St. Willibrord Parish, and Old Brewery Mission are all looking for holiday volunteers. Lend a hand!
When: Anytime
Where: Various locations