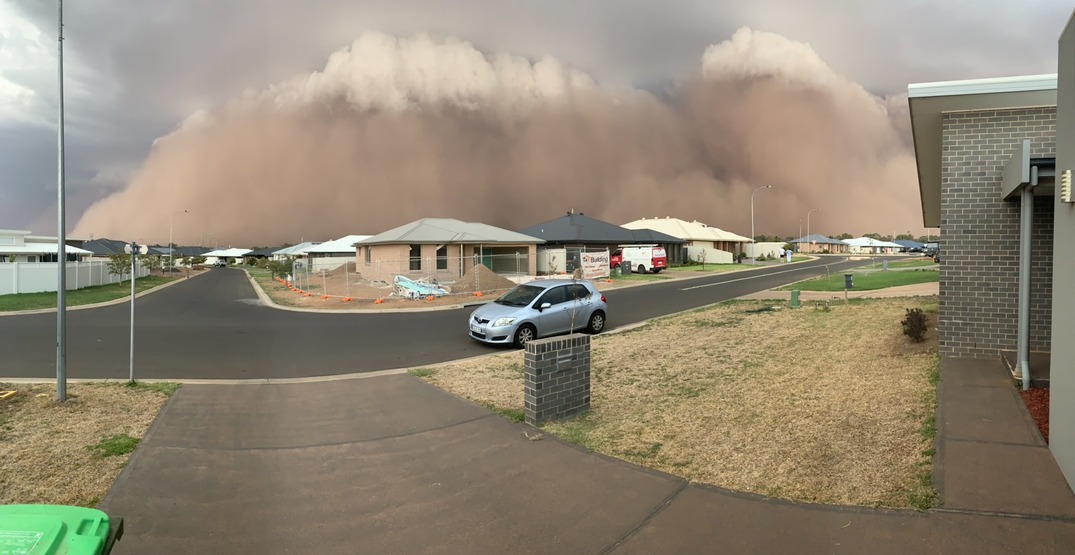 Many users took to social media to post shocking photos and videos of the 300-kilometre-wide cloud.

Nyngan‘s Grace Behsman took this video of a huge dust storm rolling in as they approached town. Watch til end – scary moment when the storm overtakes and everything goes black. The dust storm has swept the west & is encroaching Dubbo. Remember: not everyone’s celebrating rain 😔 pic.twitter.com/5VMLrFbrrT

The dust was so brutal in some areas that it managed to block out the sun.

According to The Weather Network, several regions were affected by gusts of up to 100 km/h.

A majority of the dust consisted of topsoil from state farms in New South Wales, which would be transported easily as a result of “drought-like conditions in the area.”

Contrastingly, east of the dust cloud was a polar opposite scenario.

The same weather system resulted in violent hail causing damage to homes, vehicles, and more while resulting in power outages in suburban regions of Canberra and Melbourne.

Just glimpsed the CSIRO glasshouses: none left standing. Think of all the experiments destroyed. https://t.co/YgveoHUBiz pic.twitter.com/m9izop4cpu

A group of workers having lunch at a Canberra cafe took cover under an umbrella as a severe hailstorm smashed the Australian capital on January 20.

Additionally, Brisbane and Queensland have been experiencing flash floods.

Unfortunately, the weather doesn’t show any signs of slowing down.

Australia’s Bureau of Meteorology issued a tweet on Monday explaining that a major cold front would be making its way across southern Australia on Tuesday with fire danger ratings from severe to extreme for South Australia, Victoria, New South Wales, and Queensland.

Additionally, New South Wales and the Australian Capital Territory will also experience an increased risk of fires as well as strong winds.