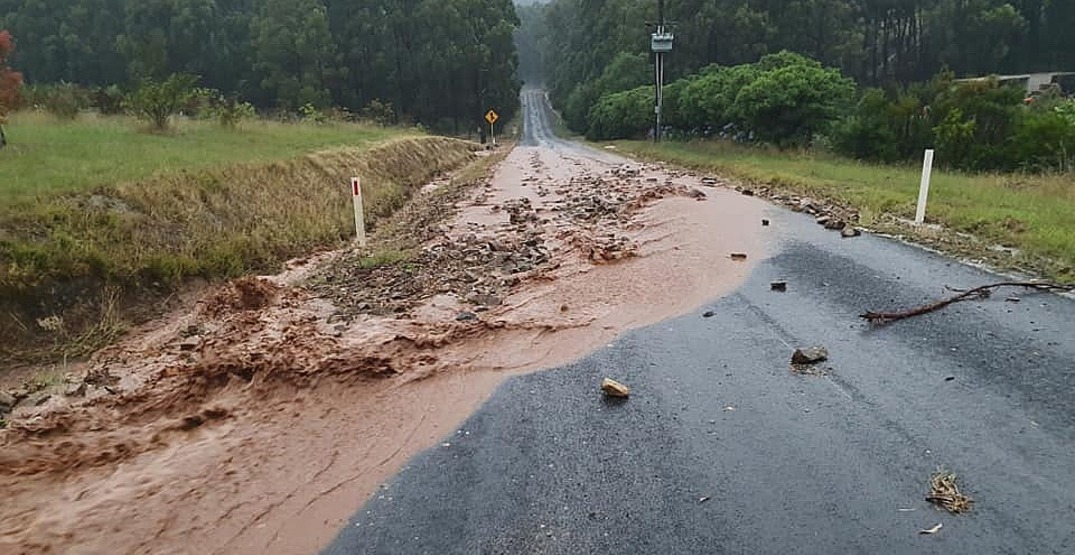 Rain and thunderstorms are bombarding the inferno engulfing Australia.

You may think that this sounds like a good thing.

However, it could bring additional issues.

Portions of New South Wales (NSW) and Victoria — two states that have experienced some of the worst fires — have already received a large amount of rain.

However, as Sarah Scully from the Australian Bureau of Meteorology explains:

“It’s a bit of a double-edged sword as heavy rainfall and gusty thunderstorms bring the potential for flash flooding, particularly in the burnt-out areas of New South Wales and Victoria, which are now vulnerable to landslips and trees coming down.”

As well, a tweet issued by the Bureau of Meteorology describes how the unpredictable “hit & miss nature” of thunderstorms makes it difficult to reliably forecast which locations will see the most amount of rain.

According to the tweet, some parts of eastern Australia plagued by drought and bushfires could potentially see upwards of 50-100 millimetres in the next few days.

However, others may not see much of it at all.

The hit & miss nature of #thunderstorms means it’s difficult to forecast exactly where the heaviest rain will be—some parts of #bushfire & #drought affected eastern Australia could see 50–100 mm over the next few days; while others may see very little https://t.co/T7MYuIdxkO pic.twitter.com/zgmiBmqcIG

The Victoria State Emergency Service shared several images in a Facebook post showcasing the damage caused by Thursday’s storm, including a massive sinkhole.

While there hasn’t been enough rainfall to put out any fires, it may have caused some relief.

The New South Wales Rural Fire Service (NSWRFS) said in a tweet on Monday that if the forecasts for rain were to be accurate, it would come as a massive saving grace to the firefighters of the region.

If this @BOM_NSW rainfall forecast comes to fruition then this will be all of our Christmas, birthday, engagement, anniversary, wedding and graduation presents rolled into one. Fingers crossed. #NSWRFS #nswfires pic.twitter.com/R9VfD0bqu2

On Thursday, they issued another tweet explaining that “although this rain won’t extinguish all fires, it will certainly go a long way towards containment.”

Relief is here for a number of firefighters working across NSW. Although this rain won’t extinguish all fires, it will certainly go a long way towards containment. This footage was captured down at the Good Good Fire burning near Cooma. #nswrfs #nswfires pic.twitter.com/fxV9u2hN6K