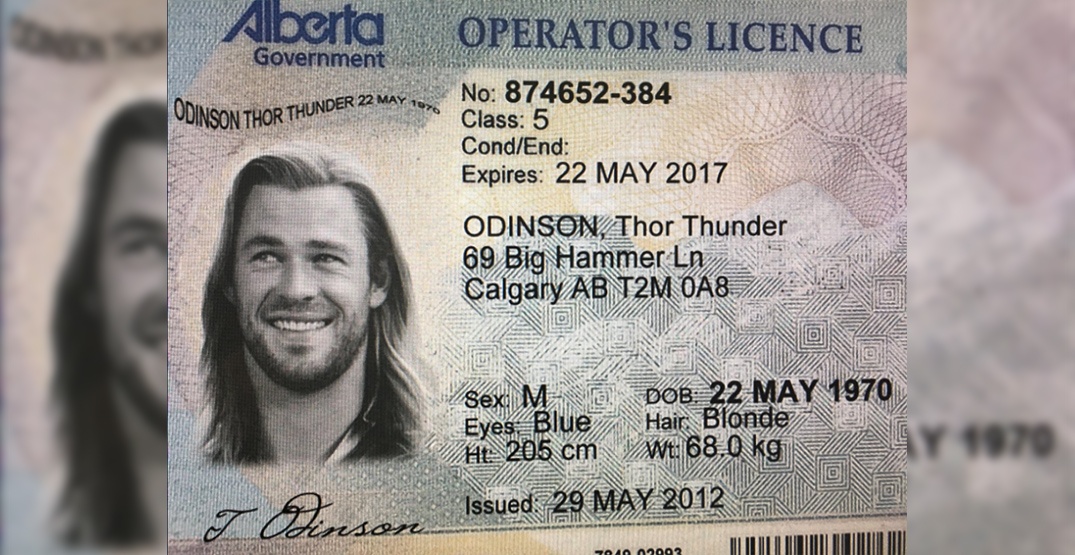 After a long day of protecting the earth and fighting the Midgard Serpent, all your typical thundergod wants to do is get back over the Rainbow Bridge and keep it real  low-key with his favourite strain of cannabis.

But it seems weed might not be legal yet in Asgard, as someone allegedly attempted to use an Alberta ID with the name ‘Thor Thunder Odinson‘ to purchase cannabis from an online dispensary.

Self-identified comedian and graphic designer, Sloane Hughes, posted a photo to her Twitter account of the mythical identification. Grow reached out to her via the social platform where she further explained the story behind the photo.

my sister works for an online weed dispensary and I’m losing my mind rn pic.twitter.com/9TQhIPO16Q

According to Hughes, she received a text from her sister, who claims the photo was used as a proof of age for an online dispensary her sibling works for.

The photo used is very clearly the actor Chris Hemsworth, who has portrayed the Marvel Comics version of the Norse deity in numerous films.

Neither her sister nor the dispensary wished to be named, but Hughes did send Grow a follow-up text showing that, unfortunately, Thor probably didn’t get his order.

And while it would be nice to think that ancient gods are out there on a quest to score the dankest of buds like the rest of us, it’s more than likely that this was merely someone trying to remain anonymous.

Odinson’s listed address, ’69 Big Hammer Ln,’ does not exist anywhere, according to Google Maps. The image also seems to be taken from a site called Viking ID, which sells a ‘Novelty Alberta Operator’s Licence’ that appears to be the original source of the photo. Also, you don’t need the wisdom of Odin to see that the expiry date on this particular piece was up during the spring of 2017.

Finally, despite some recent reports to the contrary, it’s likely ancient Norsemen didn’t have cannabis when they came to Canada either.