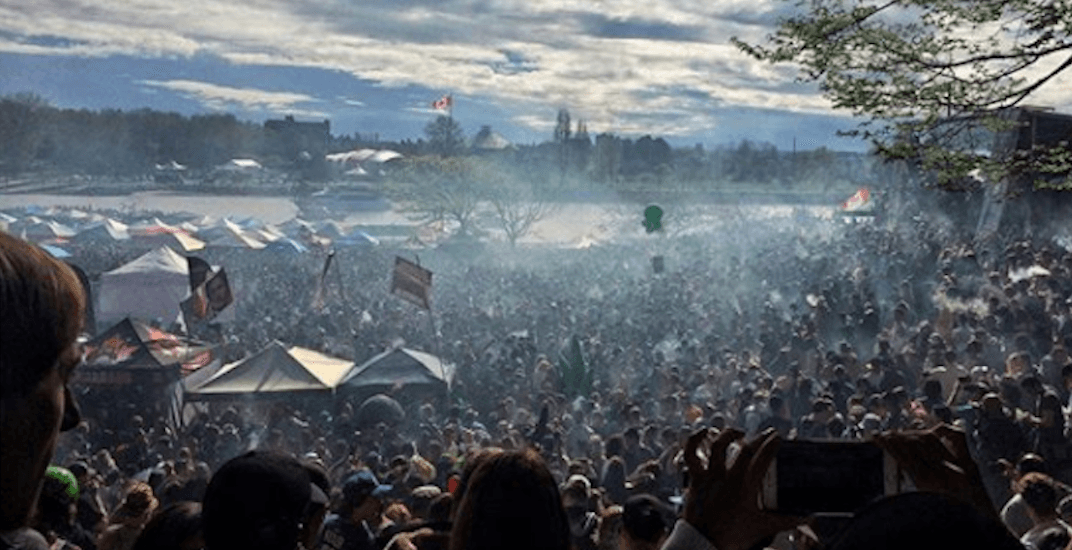 Up to 100,000 people are expected to descend on Vancouver’s Sunset Beach today to once again take part in the 420 Vancouver event – the first one in the city since Canada’s new pot laws came into effect last year.

And with the event falling on a Saturday with nice weather in the forecast, this year is expected to be the largest-ever in the event’s history.

Last month, 420 Vancouver organizer Dana Larsen wrote despite the legalization of cannabis in Canada, “there is still much to protest and much work to be done in terms of achieving equality and fairness for cannabis users, both here in Vancouver and all across Canada.”

This, he said, includes things like the fact that “cannabis users have nowhere legal to use cannabis,” and “are treated and punished far more severely than alcohol users in every way, and that “we can be imprisoned and fined just for letting someone see one legal plant growing in our garden.”

The views of Larsen and other 420 organizers have been at odds with the view of other groups, such as the Vancouver Park Board (VPB) as well as residents who say that – with cannabis now legal – the event is just one big unlicensed, unpermitted trade show and festival.

Things came to a head between the VPB and 420 Vancouver recently, when organizers announced that hip-hop crew Cypress Hill would be playing a free show during the event.

Vancouver Police have also expressed concern that the free show, and the fact that because 420 falls on a Saturday this year, underage participants could be drawn to the event. As such, the department put out a notice this week, asking parents to have a conversation about it with their kids.

They also noted that there would likely be traffic disruptions around the event, and Daily Hive will keep you updated if there are major delays.

Please be aware of potential traffic disruptions today in the West End during the 4/20 activities taking place at #SunsetBeach.

Follow us here for the latest info on unplanned traffic disruptions that could affect you. #VPD #420Vancouver #420Day #VanTraffic pic.twitter.com/h9csaS84q7

This past Monday, the VPB passed a motion – put forward by park board commissioner John Coupar – to ask 420 Vancouver organizers to cancel the Cypress Hill show, due to concerns over crowd size and park capacity, among other things.

Those behind the event said they had no intention of doing any such thing.

Asked about the motion, Larsen said the VPB was being “ridiculous” and called the motion “silly.”

Larsen said all it did was put park staff into an “awkward” position.

“We will continue to work closely with all relevant park and city departments to ensure 420 is a safe protest,” he added.

In response, Vancouver Mayor Kennedy Stewart said he intends to make organizers of this year’s 420 Vancouver repay all the costs the city incurs, as a result of the event.

The city’s first 420 event first took place outside the Vancouver Art Gallery in 1995.