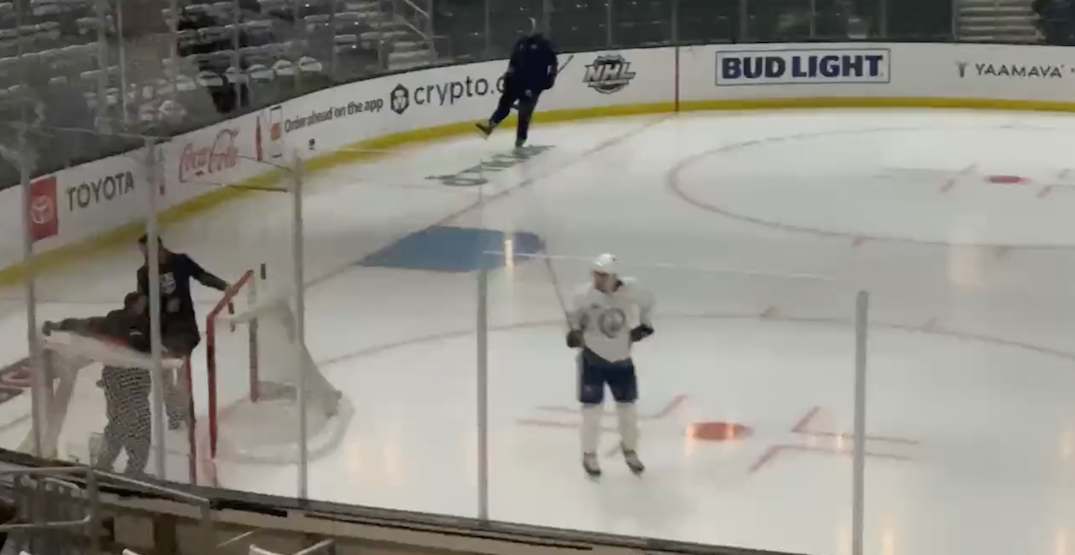 The Edmonton Oilers were left in the dark on Friday morning. Literally.

The lights at Crypto.com Arena in Los Angeles weren’t turned on for the Oilers, who trickled on the ice for morning skate a bit early in advance of Game 3 of their opening round Stanley Cup Playoffs series against the Los Angeles Kings, according to TSN’s Ryan Rishaug.

Rink attendants wouldn’t turn over the nets either, Rishaug said.

🤔 What time will the lights come on. Practice doesn't officially start till 11:30, but Kings skated at a different rink, So they haven't been turned on here at the main arena. Koskinen on at 10 after. pic.twitter.com/eNYPn28kQM

Arena staff won't give the Oilers the nets or turn the lights on. pic.twitter.com/61xiMpYBRG

“Yeah. It is what it is,” Oilers forward Zach Kassian told media after the skate. “We went through it a few times three or four years ago when we were in San Jose. It is what it is. It’s the game within the game. It’s fun. Just wait it out. Knew they were coming out eventually.

Morning skates for visiting teams are typically scheduled at 11:30 am local.

The lights came on, according to Rishaug, at 11:25 am — a full 15 minutes after Mikko Koskinen hit the fresh sheet.

“They definitely had us on right at 11:30 until they put the lights on for us,” Edmonton forward Ryan Nugent-Hopkins said. “All good. We were going for a couple laps before getting the pucks out.

“I don’t know if it’s the rules or what it is, but definitely we had to wait, which is fine. That’s usually when we start anyways.”

Gamesmanship in the playoffs is nothing new.

After Game 1, the crew at Ball Arena in Colorado just happened to accidentally leave the score up on the massive jumbotron for the Nashville Predators skate, reminding them of that 7-2 setback against the Colorado Avalanche.

It appears that the @BallArenaDenver crew accidentally left up the Game 1 final score for the @PredsNHL Game 2 morning skate. @Avalanche @NHL_On_TNT pic.twitter.com/Dh3hSZz49j

No word on whether or not it was left up on purpose.

Just like there being no evidence the lights-off approach in Los Angeles happened to be intentional or a timer-related mishap.

Chances are, though, it was no accident.

Because it’s the Cup.