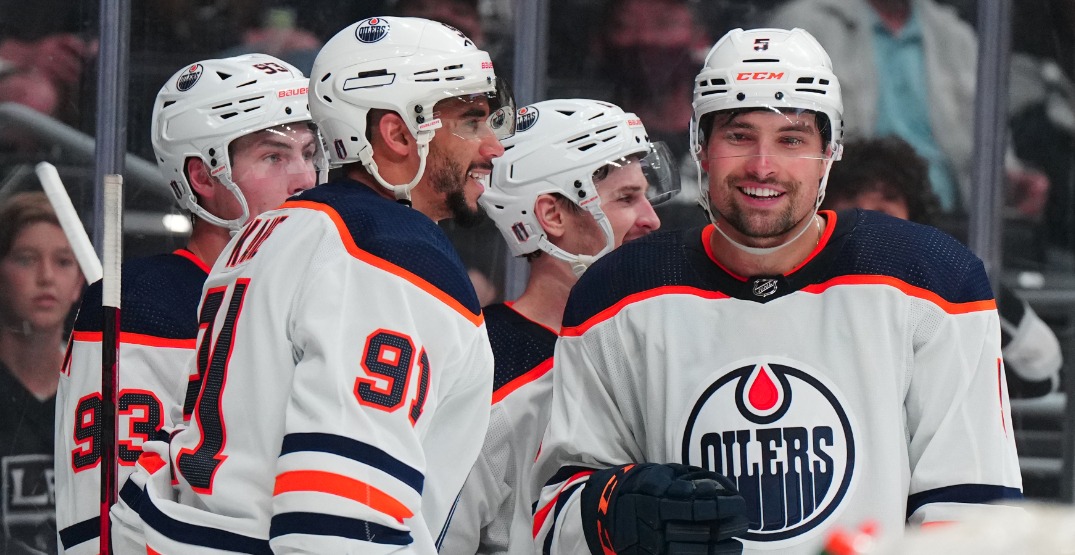 Edmonton Oilers forward Evander Kane wanted to have a big game for his uncle, Leonard, who is in the hospital with an undisclosed ailment.

Suffice to say that happened.

Kane had a hat trick for the Oilers in an 8-2 win against the Los Angeles Kings in Game 3 of their opening round Stanley Cup Playoff series, lifting Edmonton to a 2-1 series lead and delivering on the hope that he could raise his uncle’s spirits just a little bit.

“I wanted to have a big game for him,” Kane said after the lopsided victory put the Oilers to within two wins of advancing to the second round of the playoffs.

“The beginning of the year was very tough with a lot of different things going on in my life. A real credit to my family helping me through everything. …There’s a lot of trials and tribulations and it’s nice to turn the page and start to move forward in a positive way.”

“My uncle is actually in the hospital. I wanted to have a big game for him.” – Evander Kane after notching his first Playoff Hat-Trick. #Oilers

That’s one way to put it. Kane has been absolutely dominant in the playoffs, leading the postseason dance with five goals and six points.

It’s a continuation of his efforts from the regular season, after Kane joined the club in January following a bumpy end to his tenure with the San Jose Sharks. He’s been a natural fit tucked alongside Connor McDavid’s wing, and at a bargain of $1,375,000.

The effort comes after his $7 million annual contract was terminated by the Sharks, and a series of investigations in both his professional and personal life.

He had 22 goals and 39 points in 43 games to close out the regular season.

Kane’s been even more impactful through three playoff skates.

“You got to remember too that I came up February 10th, Dave Manson and I came up from Bakersfield. I wasn’t part of the whole recruitment or signing of Evander. I think he had played four or five games before Dave and I were up. I only know what I see.

“I see someone who is a good professional, someone who goes to the rink every day with a purpose to be the best he can be. Someone who compliments some of the best players in the world. I see a good teammate, and he certainly makes us a better team.”

That’s certainly been the case.

Kane’s added a physical dimension perhaps missing from Edmonton’s core, and completes it with a scoring touch. Over an 82-game season, Kane projected out to net 42 goals.

He’s seemingly been in that right spot, at the right time, for the past four months.

Certainly the last week, to say the least.

“When I got to the rink on the first day, I was really comfortable,” Kane said. “Guys were awesome and made me feel right at home. In terms of my on ice game, probably took me 10 to 15 games to get comfortable again and get my legs back. Playing with Connor for the first time, it’s going to take a bit to build some chemistry.

“I think we’ve done a great job of building that and continuing to grow that as we continue to move forward.”