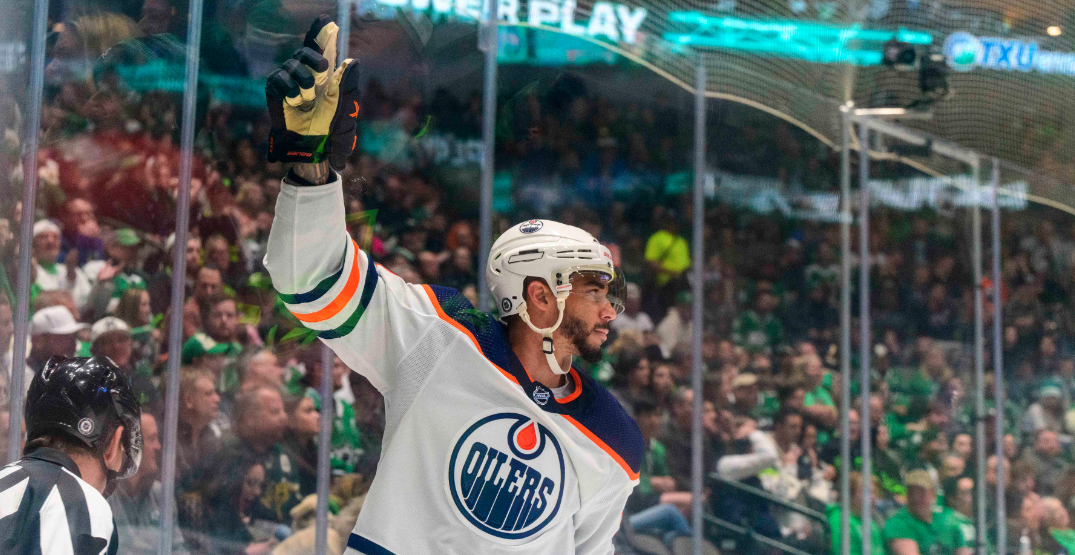 The Edmonton Oilers didn’t add much at the NHL Trade Deadline.

But the heavily lifting was done well in advance of scooping up a pair of players — defenceman Brett Kulak from the Montreal Canadiens and forward Derick Brassard from the Philadelphia Flyers — before Monday’s drop-dead exchange date.

And that was in the form of signing Evander Kane.

Kane has lived up to his end of the bargain since the Oilers added him to the fold on January 27, slotting third on the team in points with 22 and second in goals with 14.

Over the course of a full 82-game season, Kane is playing at a pace of 46 goals and 26 assists — a total of 72 points. He’s very much lived up to the projected fit hyped when he signed almost two full months ago. Kane has come as advertised, a rugged 6-foot-2, 210-pound power forward who can finish and create space for his linemates.

Now the question will be: can they do it again?

Sadly for the Oilers, not likely.

Kane has already, at least as things stand now, out-priced himself in Edmonton.

Edmonton has just over $73,600,000 committed against the cap for the 2022-23 season with a roster size of 13 players. Kane, Brassard, and Brad Malone are pending unrestricted free agents up front, and Kulak and Kris Russell both have expiring contracts at the end of the season.

The Oilers have key restricted free agents to ink in forwards Jesse Puljujarvi and Kailer Yamamoto.

There’s just shy of $7.9 million to work with for 10 bodies, should Edmonton look to carry a full 23-man roster. There’ll be a bit of a reprieve in Oscar Klefbom’s $4.167 million contract, but burying almost an identical amount in buyouts of James Neal and Andrej Sekera plus retained salary to the Calgary Flames for Milan Lucic is far from ideal. Mike Smith will need a platoon partner, too, with Mikko Koskinen set for unrestricted free agency at season’s end (though a push from Stuart Skinner and his league-minimum salary could help).

There are offseason options that can help accommodate space, whether that’s trying to find a suitor for fourth-liner Zach Kassian and his $3.2 million salary or the $4.5 million defenceman Tyson Barrie is owed through 2023-24.

If not, there’s no squeezing Kane in.

And he likely isn’t interested in re-upping on a year-by-year basis.

The 30-year-old will once again start to look for something more long-term after having his seven-year, $7 million pact terminated in January, making Kane available to the Oilers at such a steep discount.

He’ll need to make hay while the sun is shining. That’s understandable and forgivable.

And in all fairness to him, Kane probably shouldn’t need to take the same sliver heading into next season after showing, at least on the surface, that his past problems have stayed in the rearview.

Should he not re-sign, it’d still be fine.

He chose the Oilers to help resurrect his career, and the Oilers chose Kane to help push them into a playoff position. Both have held up their end.

It always felt like a fling, not a marriage.

The salary constraints for both sides might just cause the split.