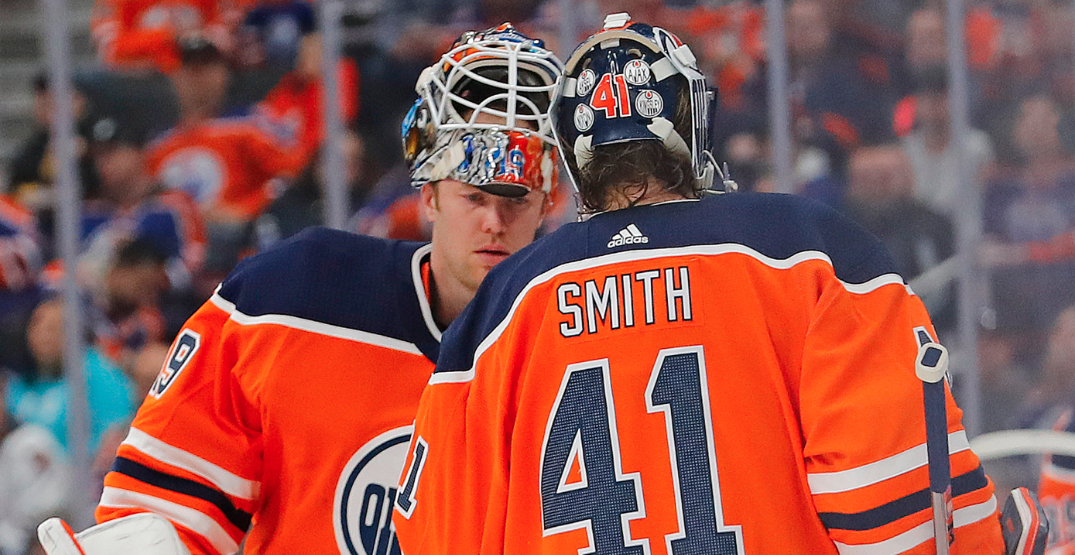 For better or worse, the Edmonton Oilers will ride a goaltending tandem of Mikko Koskinen and Mike Smith to a potential berth in the Stanley Cup Playoffs.

Maybe mix in a little Stuart Skinner too, should the pair falter.

It’s what the Oilers are left with after an unfruitful foray into the open market for a goaltender, with a sky-high demand on netminders, little cap space, and, really, only one sure-fire upgrade in the crease.

“I think when both goalies are healthy, I’m comfortable with our goaltending,” Oilers general manager Ken Holland said shortly after the NHL Trade Deadline passed on Tuesday. “It’s been over two-and-a-half years. I think that the goaltending has been really designed so it’s a 1A and 1B.”

Waking up Tuesday morning, the Oilers currently hold the third spot in the Pacific Division, one point back of the second-place Los Angeles Kings, and three points clear of the fourth-place Vegas Golden Knights, with two additional games at hand. Vegas holds the second wild card into the playoffs from the Western Conference.

They’ve wrangled themselves into a playoff spot, albeit not so firm, despite some shaky goaltending to date.

Koskinen has had the bulk of the workload this season with Smith frequently sidelined due to injury. The 33-year-old Koskinen has a sharp 23-9-3 record, despite a 3.04 goals-against average and .904 save percentage, and a -5.2 goals saved above expected, according to MoneyPuck.

Neither set of numbers is overly inspiring.

But it’s what Holland has to work with.

And with Marc-Andre Fleury hand-picking the Minnesota Wild as his destination of choice on Monday, there weren’t any options that, hands down, would guarantee the Oilers better goaltending.

Not at a price they could afford — both in acquisition cost and real dollars.

“I think we’ve added $612,000 of cap space, and we are snuggled within a thousand or two (to the cap ceiling),” Holland said. “We have room to call up one player, just if we need to call up if we have an injury, whether it’s a goalie or one of those forwards or a defenceman down there. We didn’t have a lot of space.”

There’s a little bit of insurance in Skinner.

He’s got the best stat line, though the smallest sample size to go with it.

And, parking Holland’s optimism aside, there is reason to believe in a Koskinen-Smith tandem.

Since coming out of the NHL All-Star Break, with both goaltenders back to full health, Koskinen is 7-1-1 with a 2.75 goals-against average and .914 save percentage.

Not mind-blowing numbers, but enough to get by on a team that’s seventh-best in the NHL with an average of 3.35 goals-per-game.

But it might be enough to get them there.

“I guess for me, I’m comfortable that when we’ve got the tandem together that they give us good goaltending,” Holland said.