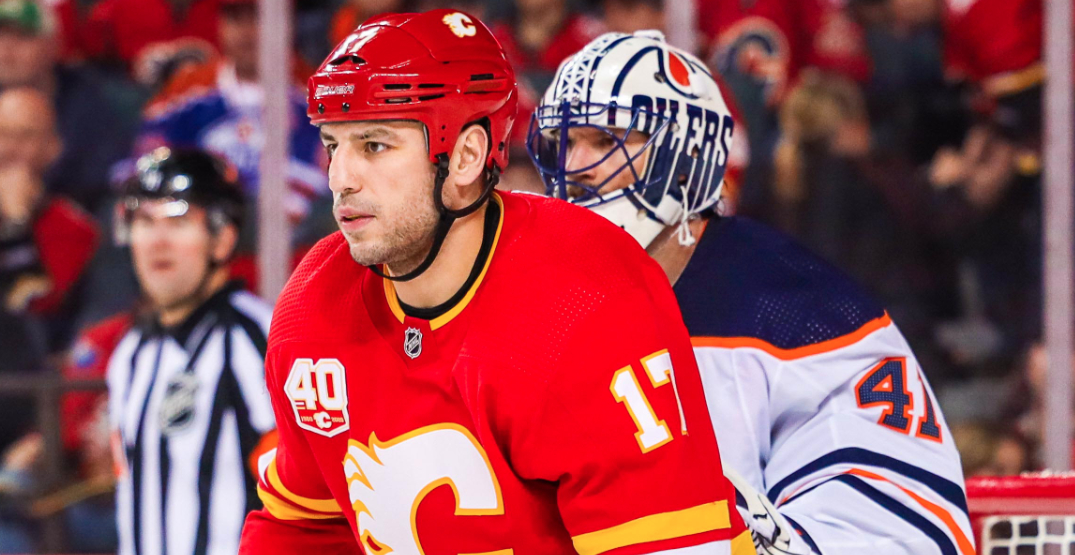 Milan Lucic wasn’t shy to sum it up.

When asked if the former Edmonton Oilers forward and current Calgary Flames cult hero still had some friends on the other side of the “Battle of Alberta,” Lucic’s reply was short, succinct, and simple.

“For the next however many days, no,” he replied, punchy and punctually.

Not when the two sides will battle for seven games or less in the second round of the Stanley Cup Playoffs, anyway.

All’s fair in love and war, and this is a battle.

Lucic spent 243 games over three seasons with the Oilers from 2016 to 2019 before being optioned to the Flames in exchange for James Neal — a trade that has clearly benefitted the southern rival more than their northern counterpart.

There are still plenty of holdouts from his tenure up the QEII, including some significant skaters by the names of Connor McDavid, Leon Draisaitl, and Darnell Nurse.

They’ll be more numbers on a jersey and fewer names on a bar starting tomorrow, though, as the “Battle of Alberta” finds itself in playoff territory for the first time since 1991.

“I think it’ll be great; I think it’ll be fun,” Lucic admitted Tuesday. “I think the people of Alberta have been waiting a long time for this since 1991. Just something to look forward to as an athlete and a player.”

“As an athlete, it’s something you look forward to and something that you’ve got to have fun with.”

There’s a more diplomatic response to a similar question.

“Honestly, I think you guys hype it up more than the players do,” Oilers goaltender Mike Smith preached to the media Monday. “I think, obviously, being this close as far as logistics-wise makes it a little bit more interesting, but I think to us we’re not getting caught up in the hype.

“It’s just another series for us.”

Smith might just be trying to smoulder the Flames, though.

It was the stopper, remember, that said in an interview with Colby Armstrong of Sportsnet just two weeks ago that “I was kind of choked when I left Calgary, so it was an easy transition to hate them off the bat.”

“I honestly enjoyed playing in both cities,” Smith said earlier this week. “Obviously I’ve enjoyed my time in Edmonton and being a part of the community here and seeing the support we’re getting as this goes on. Calgary had some great times, too. Some great friends on the team. Met some people outside of hockey there that I’m still friends with.”

“But when it comes down to it, you’re trying to win a series. Whether it’s Calgary or whoever it is, the job’s the same. We’re trying to go out there and compete for the ultimate prize. If we have to go through Calgary to do that, then that’s the goal, and that’s all that’s on our minds.”

Smith and Lucic are just two of an active foursome that has been on opposite ends of the “Battle of Alberta” in their careers.

Defencemen Brett Kulak and Kris Russell, both Oilers, were once first with the Flames. So too was pivot Derek Ryan, who now helps anchor down Edmonton’s bottom-six forwards.

A chance to push that rivalry, which has seen some ignition in regular-season skates, is a chance to help nudge the competition into a new decade after remaining dormant for so long.

“Everyone’s pumped, said Kulak, who played with Calgary from 2014 to 2018 and was moved to Edmonton at the NHL’s trade deadline from the Montreal Canadiens. “I’ve got friends, families, everyone…I’ve got lots of people who are die-hard Flames fans and lots of die-hard Oilers fans. They’re looking forward to it.

Calgary has locked in a playoff berth in just four of the 12 seasons, including five consecutive absences from 2010 to 2014.

“It’s huge,” Ryan said. “Obviously the Battle of Alberta is another level in the regular season, and now for us as players and the fans and the cities, to have that rivalry exist in the playoffs is something special. I think we’re all going to try to take it in and play our best and live in the moment.

“They’re both great places to play — Canadian markets. Fans are very into the games. The buildings are loud, and they want their team to win. I think it’s a similar vibe in both cities.”

Similar vibes perhaps behind the scenes in gearing up to face familiar-faces-turned-foes.

“I think you have to enjoy it,” Lucic said. “You know, it’s not so often you get traded from a rival team to another that’s in the same province, and you end up playing them in a playoff series…and not just a playoff series, it’s the second round of the playoffs.

“You just take it in, enjoy it all and stay in the moment, and then just add it to the list of things that I’ve been fortunate enough to experience in my hockey career.

“It’s about staying in the moment and about going out there and making it a good experience.”