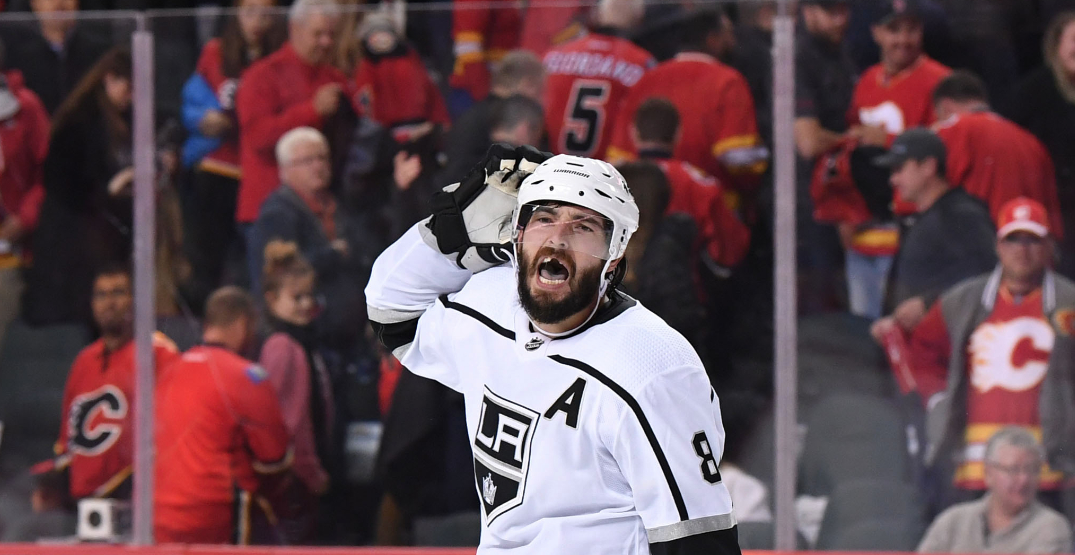 And surprisingly, he’s backing the Calgary Flames in their push through the Stanley Cup Playoffs.

Sorry, Edmonton Oilers fans. The former Norris Trophy winner is picking the team south of the QEII in the second-round series.

“I would think Calgary is gonna win,” Doughty said, according to John Hoven.

“Now Edmonton fans are probably gonna come at me, but my pick would probably be Calgary.”

Doughty says he's taking the Flames in the Battle of Alberta.

Then, immediately points out that the Oilers fans are probably going to now be on his case.

The blueliner has history with both franchises.

He was forced to watch from the sidelines as the Oilers dispatched Doughty’s Kings in seven games of their opening-round Stanley Cup Playoffs last week.

On the Calgary end, Doughty, of course, has had his run-ins with the Flames, too.

In 2017, the Los Angeles rearguard said he had “no respect” for Tkachuk, adding “I respect everyone else,” Doughty added. “I’ll never talk to him off the ice.”

The comments came after Tkachuk was suspended two games for elbowing Doughty a week prior, a punishable hit that sparked a rivalry between the two players that continues to present day.

In other words, that rivalry — or general distaste for each other — has blossomed since given their Pacific Division proximity to each other.

The war of words, and sometimes on-ice action, has developed into one of the NHL’s best rivalries. Doughty said Tkachuk “might be” the most hated player in the NHL in 2018.

Tkachuk told Scott Oake on After Hours in 2019 that comments from Doughty “goes right in one ear, out the other.”

As much as the rivalry has gotten heated at times, it’s also become a bit of a punchline for teammates on both sides.

So much so, that the Kings’ Ben Hutton, who drew Doughty in the team’s secret Santa exchange prior to Christmas in 2020, asked Tkachuk to sign a hockey stick for Doughty.

Doughty isn’t the only notable name to predict a Flames win in the first Battle of Alberta in 31 years. Wayne Gretzky, who authored his fair share of Calgary heartbreak during his time in Edmonton, has also tagged the Flames as series victors in his bracket challenge for the playoffs.