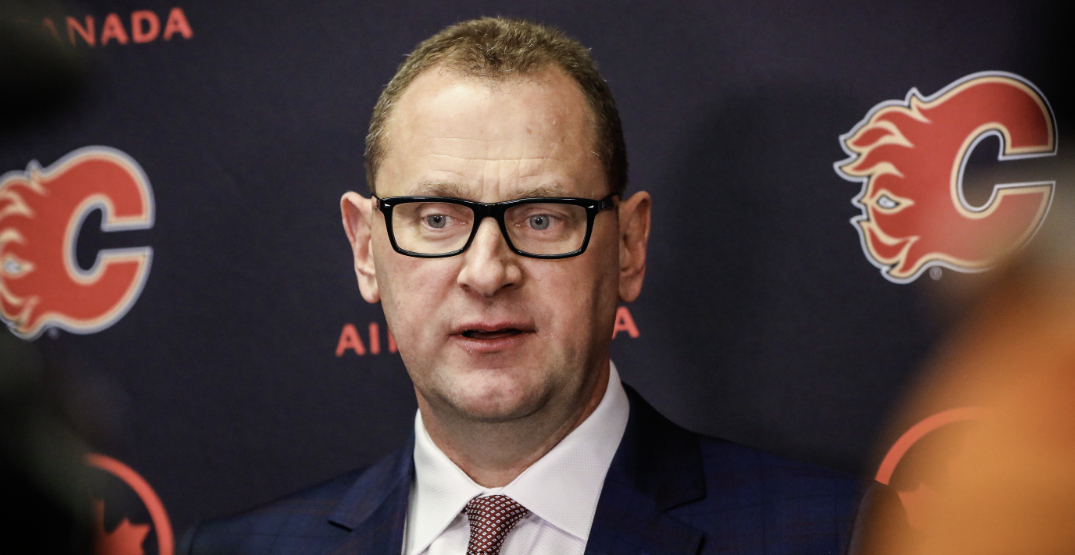 The Calgary Flames are cooking.

It doesn’t necessarily mean general manager Brad Treliving is burning up for the phone lines.

But it doesn’t mean he’s not, either.

“I think it’s a misconception,” Treliving started on Sportsnet 960’s Boomer in the Morning.

“Not saying we’re out there trying to do a whole bunch of stuff, but the usual perception publicly is when a team is going poorly, ‘Oh we’ve got to go make trades,’ and when a team is playing well, you’re not going to do anything. You’re constantly looking to help your team.

“And sometimes, quite frankly, when your team is doing well, that’s the best time. Players are playing well. You’re not doing something out of poor emotion and making emotional decisions. Our team, I like the look of it.”

The thought is intriguing.

Adding to a team that already sits atop the Western Conference and tied for second in the league at 29 points through the opening quarter of the season.

Four straight wins and a seven-game point streak (5-0-2), too, heading into a much-needed break in their schedule.

The 38 goals they’ve given up are second-fewest in the league, and they have an NHL-leading 1.90 goals-against per game. Mix in special teams work, on both sides, that ranks among the best, and there’s reason for Treliving to put the phone down and maintain the status quo.

That’s also the reason to pick up and start dialling, too.

“You’re always talking around the league,” Treliving said. “Those aren’t necessarily conversations that stop. You’ve got relationships with all the managers and you’re in pretty close contact with everybody, and you know what’s happening in the league, you know where teams are at, and you usually have a pretty good idea of what teams are trying to do what.“

What would be on the shopping list for Treliving?

His goaltending has been elite, with both Jacob Markstrom and Dan Vladar ranking in the top three in the league in goals-against average and save percentage among stoppers with more than five starts.

He’s got a bonafide sniper, at least through this stage of the season, in Andrew Mangiapane, who ranks second in the show with 15 twine-ticklers.

The GM has two of the top-10 scorers, too. Winger Johnny Gaudreau has 23 points (9G, 14A) to slot himself sixth heading into action Thursday night. Elias Lindholm, his centre, isn’t far behind at 22 points (8G, 14A) and paces the NHL with a plus-19 rating. Matthew Tkachuk, the third of the trio, is no slouch at 18 points (9G, 9A), either.

Two defencemen, Rasmus Andersson and Noah Hanifin, are parked in the top-5 in plus-minus, and Oliver Kylinton slots in at 10. Kylington, arguably the team’s biggest surprise this season, also ranks in the top-20 in points by a defenceman with his three goals and nine assists.

The gaps are apparently few, but there’s no such thing as too much depth scoring, and while the Flames’ top four scorers have 41 goals, the remaining 19 skaters on the roster combine for just 27.

Improving a defence that lost captain Mark Giordano in the offseason to the Seattle Kraken might make sense, too.

And it could put Treliving in a buying mood, whether it be now or at the NHL Trade Deadline in March.

“We’re not getting ahead of ourselves,” Treliving said. “As much as everybody had us dead and buried in the summer, we didn’t think we were that. As much as everybody wants to anoint us right now, I don’t think we’re that. I think you have to be steady on the wheel at all times. I like the spot that we’re in after 20.

“The manager’s job is to continue to look big picture at the team and the organization, and if there’s ways for us to try to get better out there, certainly we want to pursue it. But we’ve got a pretty good feel for what’s going on around the league, and we’ll continue to monitor that and have those discussions.

“If there are ways to help us, we’ll certainly be all ears.”