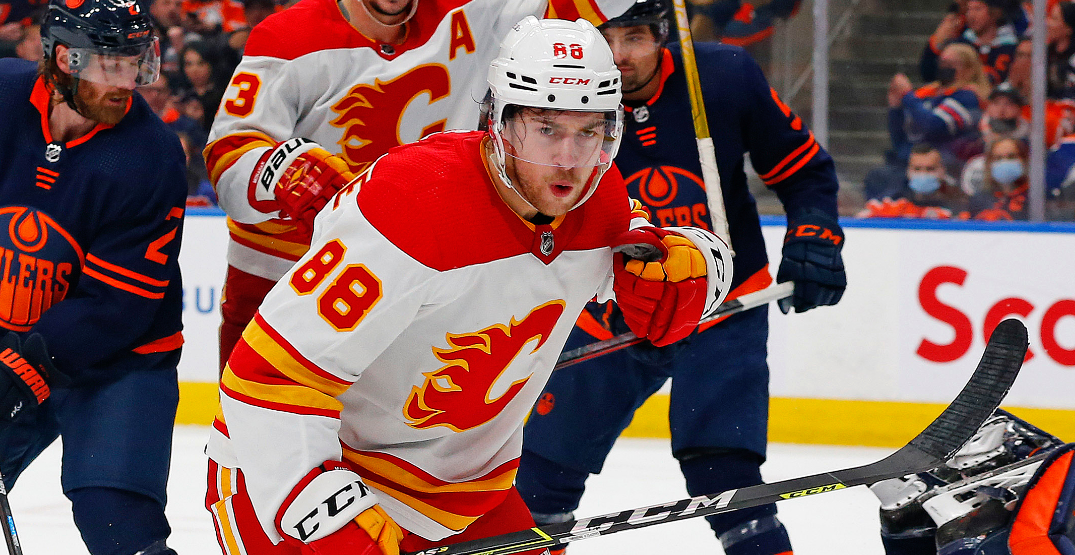 Johnny Gaudreau, with Andrew Mangiapane sitting just a foot from him, was queried about his teammate’s stat line.

Fifteen goals. Two assists for Mangiapane, pacing the team in the first category and well behind most in the latter.

But why would he?

Only Leon Draisaitl of the Edmonton Oilers has more twine-benders this season than Mangiapane, the Flames’ biggest breakout star and, as a result, option for Canada at the 2022 Beijing Olympics.

Gadureau, Elias Lindholm and Matthew Tkachuk each sit tied for second in goals on the team with eight.

Mangiapane’s early-season outburst, and lack of helpers, has made him an easy target for lighthearted jabs from teammates.

All in wholesome fun, of course.

“It’s all good. It’s all fun and games, right?” said Mangiapane, whose two helpers on the campaign are both secondary assists. “Like John said, puck’s kind of finding me. I’m just happy to put it in right now.”

It has been for some time now.

Mangiapane is third among Canadian-born forwards in 5-on-5 goals since the start of the 2019-20 campaign. His 40 markers only trails Olympic locks Connor McDavid (55) and Brad Marchand (49). It puts him ahead of other shoe-ins like Nathan MacKinnon (35), Patrice Bergeron (35) and Sidney Crosby (31).

He’s also ninth overall, sixth amongst Canadians, in high-danger chances for with 23 at 5-on-5, according to Natural Stat Trick. Mangiapane ranks 12th in scoring chances for, too.

The spotlight, and scrutiny, hasn’t gotten to the 25-year-old just yet.

“It’s okay. I’m just kind of focusing on my gameplay really,” Mangiapane said. “All that kind of background noise, just try not to let it affect me. Just go out there and play my game and see where it takes me.”

That game has seen a considerable boost of late.

In addition to his 15 regular-season markers, Mangiapane can add another seven goals — with four assists — in seven games from his stint with Hockey Canada at the 2021 IIHF Men’s World Championship last spring.

He was named the event’s most valuable player — an excellent showcase stage that first put him in Hockey Canada’s crosshairs for Beijing.

It’s given him a boost, which he credits for the outburst.

“I always kind of just go back to confidence,” Mangiapane said. “I think playing in this league, you’ve got to have confidence to make plays and confidence in yourself. When I first kind of came in I was maybe a little shy and didn’t want to make a mistake or anything like that, but as the season’s been going, you just kind of go out there and play your game and play with confidence.”

Where is all this coming from?

“I’d say everything,” Mangiapane said. “Just being familiar with the team, the guys. We’re close. Great group of guys in there. Come to the rink every day, lots of fun. Just going out there, work hard for the team and try to get the two points and whatever happens, happens.”

The confidence is there. So too is the conditioning, coach Darryl Sutter offered.

It’s played a major factor, according to the bench boss.

“I think he’s a better-conditioned athlete, first and foremost,” he said.

Safe to say, Sutter has Mangiapane firing on all cylinders. He just needs to get him firing more shots, according to the coach.

Mangiapane is shooting at a 31.3% clip heading into action against the Chicago Blackhawks on Thursday, with his 15 goals coming on 48 shots.

No one else on the Flames is close to his success rate.

Only Draisaitl, at 31%, and Chris Krieder of the New York Rangers, at 23.6%, are within 10 digits of Mangiapane’s current success rate, among players with a minimum of his 48 shots.

“That’s pretty high. That’s usually not a sustainable number,” said Sutter, who has guided his team to an 11-3-5 start. “But on the other side of it is you want him to take more shots.

“You don’t mind the percentage going down. You just want more shots.”

Especially when he’s around, and sometimes in, the net.

“That’s where you’ve got to go to score in this league,” Sutter said. “It’s pretty much a given. If you don’t get within 10 feet of the goalie, somebody, you’re not going to score.”

Calgary’s 5-foot-10 sniper has done that.

“He’s playing well for us obviously,” Gaudreau said. “The puck is finding his stick like the game in Boston. Sent [Dillon Dube] on a breakaway and he’s the one scoring.

“He’s around the net and finding pucks and he’s helping our team win games.”