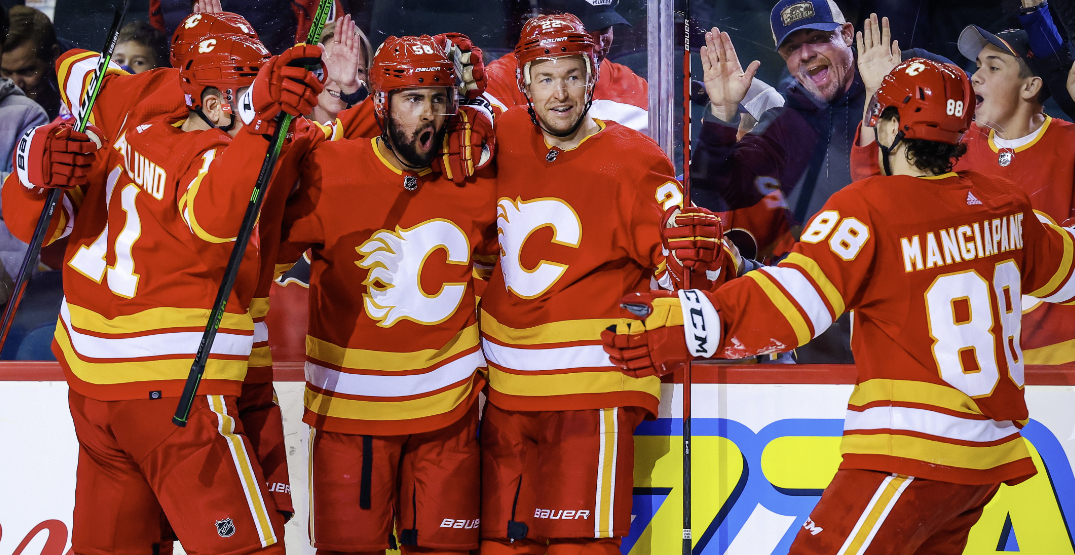 From Calgary to Montreal to Toronto to Ottawa to Philadelphia to Buffalo to Long Island to Boston and back to Calgary.

But now, the Calgary Flames will get a coveted three-day break after a 5-2 home win against the Chicago Blackhawks on Tuesday night.

“There wasn’t much left there, was there? You could see it from the start,” Flames skipper Darryl Sutter said postgame. “But these are the ones you have to know how to win.

“The bottom line is they are tired. We were gone the whole time in the eastern time zone and you get home in the middle of the night (Monday morning) and have to play this game.

“It’s almost not fair. Give the players credit.”

The @NHLFlames (12-3-5, 29 points) extended their point streak to seven games (5-0-2) and boosted their lead atop the Western Conference.#NHLStats: https://t.co/7UJ0gNEaJA pic.twitter.com/n9UuQftl7c

Give Sutter credit, too. He has the Flames humming.

Calgary opened a three-game homestand Tuesday with their fourth straight win and seventh consecutive skate with at least a point (5-0-2).

“It was probably the toughest stretch of our schedule, playing nine games in 15 days, starting in Calgary and ending in Calgary,” Flames forward Milan Lucic said. “Just felt like one big long road trip, but I think we did a good job managing our energy, managing our rest and being fresh in all nine games.

“You look at all nine games. We were in all nine games, which is a great feeling as a team. To get five wins and 12 points out of all that, it’s a good sign for the team.”

Despite the grind, which includes 20 games through the first 39 games of Calgary’s campaign, Sutter has steered his group to to both the Pacific Division and Western Conference lead.

Credit Sutter’s system for that.

Only four teams have averaged more shots-for per game and fewer shots-against per game.

Oh yeah. The Flames have set a few shutout records along the way, too.

Johnny Gaudreau opened the scoring for the @NHLFlames who have now netted the first goal of a game for the 15th time this season, which leads all teams in 2021-22.#NHLStats: https://t.co/Ekx0pFrTUv pic.twitter.com/AZa83tyE6I

All from a tired team who most prognosticators figured would be sneaking into the playoffs in an unpredictable Pacific.

Instead, the group is heading into the fabled American Thanksgiving marker in one of their best situations in franchise history.

“The first 20 games is a big part of the year and I think we’re pretty happy with where we’re at after these first 20 games,” Flames winger Matthew Tkachuk said. “We’re in a good spot right now, top of the division. Since I’ve been here we haven’t had a good start and then followed it up with a good stretch until Christmas so hopefully we can do that now.”

Ballparking it, roughly 75% of teams in a postseason spot by the annual American holiday go on to qualify for the Stanley Cup Playoffs.

It puts the Flames in a strong position through the first quarter of the season.

But before the remaining three-quarters kicks up, Sutter’s squad will kick back.

With some Thanksgiving traditions, too.

“We haven’t had this (rest) since we started late, I don’t think,” Tkachuk said. “I don’t even know anymore. We excited to have this. Big day for us Americans on Thursday.

“I’m just excited to watch football on Thursday. That’s kind of where my mind is at right now. We need to take a little mental break after all this for a couple days, and everybody will do the exact same.

“Some pumpkin pie and some football.

“Maybe a glass of wine in there as well.”